The most-studied mass extinction in Earth history happened 65 million years ago and is widely thought to have wiped out the dinosaurs. New University of Washington research indicates that a separate extinction came shortly before that, triggered by volcanic eruptions that warmed the planet and killed life on the ocean floor.

The well-known second event is believed to have been triggered by an asteroid at least 6 miles in diameter slamming into Mexico’s Yucatán Peninsula. But new evidence shows that by the time of the asteroid impact, life on the seafloor – mostly species of clams and snails – was already perishing because of the effects of huge volcanic eruptions on the Deccan Plateau in what is now India.

The eruptions would have filled the atmosphere with fine particles, called aerosols, that initially cooled the planet but, more importantly, they also would have spewed carbon dioxide and other greenhouse gases to produce long-term warming that led to the first of the two mass extinctions.

“The aerosols are active on a year to 10-year time scale, while the carbon dioxide has effects on a scale of hundreds to tens of thousands of years,” Tobin said. 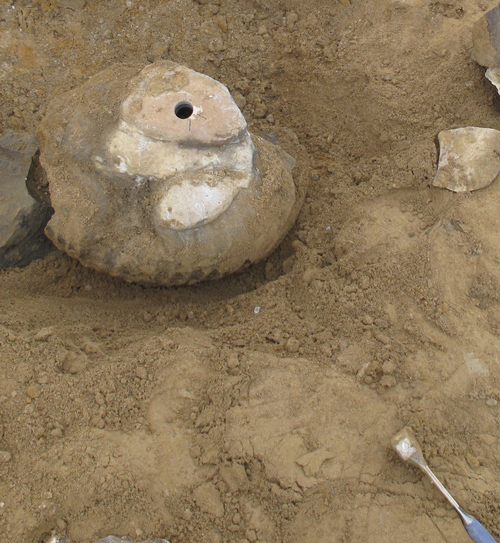 A 2009 image shows the excavation of a large ammonite on James Ross Island in Antarctica. The hole in the center was left when a core sample was extracted so the fossil could be dated using a process called magnetostratigraphy. Image credit: Thomas Tobin/UW

During the earlier extinction it was primarily life on the ocean floor that died, in contrast to the later extinction triggered by the asteroid impact, which appeared to kill many more free-swimming species.

“The species in the first event are extinct but the groups are all recognizable things you could find around on a beach today,” he said.

Tobin is the lead author of a paper in the journal Palaeogeography, Palaeoclimatology, Palaeoecology that documents results of research conducted in a fossil-rich area on Seymour Island, off the Antarctic Peninsula.

That particular area has very thick sediment deposits and, for a given interval of time, might contain 10 times more sediment as the well-known Hell Creek Formation in Montana. That means scientists have much greater detail as they try to determine what was happening at the time, Tobin said.

The researchers took small surface core samples from rocks and fossils in the Antarctic sediment and used a method called magnetostratigraphy, employing known changes over time in Earth’s magnetic field to determine when the fossils were deposited. The thicker sediment allowed dating to be done more precisely.

“I think the evidence we have from this location is indicative of two separate events, and also indicates that warming took place,” Tobin said. 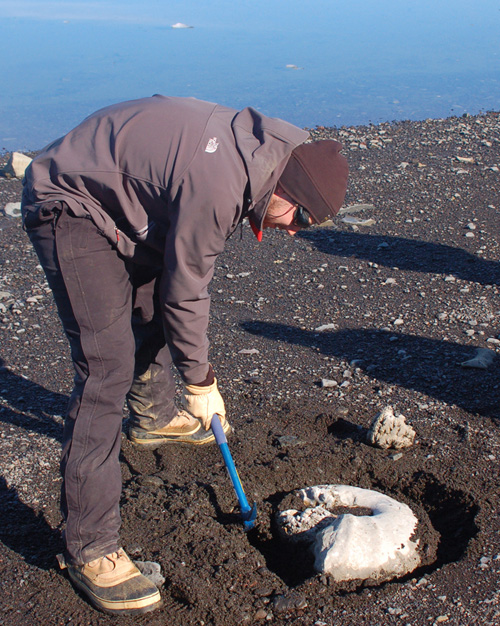 Thomas Tobin clears sand from around the fossil of a giant ammonite he found in 2009 on James Ross Island in Antarctica. Image credit: University of Washington

There is no direct evidence yet that the first extinction event had any effect on the second, but Tobin believes it is possible that surviving species from the first event were compromised enough that they were unable to survive the long-term environmental effects of the asteroid impact.

“It seems improbable to me that they are completely independent events,” he said.

The paper’s coauthors are Peter Ward, Tobin’s doctoral adviser, and Eric Steig, both UW professors of Earth and space sciences; Eduardo Olivero of the Southern Center for Scientific Research in Argentina; Isaac Hilburn, Matthew Diamond and Joseph Kirschvink of the California Institute of Technology; Ross Mitchell of Yale University; and Timothy Raub of the University of St. Andrews in Scotland.