Bing Challenges Nation to ‘Bing It On’

REDMOND, Wash. — Sept. 6, 2012 — Beginning today, America can click and choose which Web search results it prefers by participating in the Bing It On Challenge, available at Bing.com. Based on research that indicates people prefer Bing Web search results over Google, Bing is inviting consumers to come and see for themselves with an online test designed to show that the quality of Bing’s Web search results has surpassed Google’s.

Although most people identify themselves as Google searchers, an independent study commissioned by Microsoft Corp. shows people chose Bing Web search results over Google nearly 2-to-1 in blind comparison tests.* Given those findings, Bing decided it is time to let people see for themselves that there is a better option in search.

“Relevancy of search results is the No. 1 driver of search engine preference, and independent research shows that people chose Bing’s Web search results over Google’s nearly 2-to-1,” said Mike Nichols, corporate vice president and chief marketing officer of Bing. “It’s time to break the Google habit and learn why you deserve more from your search engine.”

How Does It Work?

The Bing It On Challenge is a fun and easy online test that allows you to compare Bing and Google’s Web search results. The challenge is simple — conduct five search queries of your choice and compare unbranded Web search results from Bing and Google side by side. For each search result, you choose a winner or declare it a “draw.” Next the test shows you which search engine came out on top and lets you share the Bing It On Challenge with others via Facebook, Twitter and Google+. 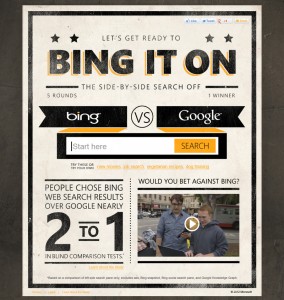 Bing is launching a nationwide campaign to show why Bing is better than Google. Take the Bing It On Challenge at www.bing.com. Image credit: Microsoft

“In addition to better search results, Bing also includes useful information from your friends and experts from Facebook, Twitter, Quora, Foursquare and more, which is not available on Google,” Nichols said. “If you want the best search results and a new, more useful way to search with your friends, try Bing today.”

Bing It On will be promoted via a nationwide television and online ad campaign launching tonight during MTV’s Video Music Awards. During the coming months, the Bing It On Challenge will also be prominently featured in Microsoft retail stores nationwide, as well as via pop-up Bing It On Challenge stations across the country. You can follow along on the Bing Facebook page, @Bing Twitter handle and Twitter hashtag #bingiton.

Today, Bing is also launching the Bing It On sweepstakes, giving people a chance to win a big box of awesome Microsoft prizes, including a Microsoft Surface, Windows 8, an Xbox 360 with Kinect for Xbox 360 and Xbox LIVE, a Windows Phone, and more, simply by tweeting out a designated Bing It On Challenge tweet. The sweepstakes will run until Oct. 18, 2012. Visit https://www.bingsweeps.com to find the tweet and for more details on how to participate.

Bing It On Challenge research was based on a study conducted by Answers Research, an independent research company based in San Diego. The research is based on a comparison of the Web search results pane only; it excludes ads and material in other parts of the page such as Bing’s Snapshot and Social Search panes and Google’s Knowledge Graph. Learn more at https://www.bingiton.com.

Bing is the search engine from Microsoft, designed for people who do. For people like you who are always doing more and don’t have time to sit still. Now, only Bing brings together the best search and the best people from your social networks, like Facebook and Twitter, to help you spend less time searching and more time doing. So whether you’re on your PC or on your phone, Bing is designed not just to connect you to the information you are looking for, but also to help you get things done right on Bing.com.

* Based on a comparison of Web search results pane only; excludes ads, Bing’s Snapshot and Social Search panes, and Google’s Knowledge Graph. Learn more at https://www.bingiton.com.