A U physicist will help determine if neutrinos can outrace light

That wasn’t supposed to happen. If the speed of light in a vacuum—denoted “c” by physicists—isn’t the universal speed limit, it would mean that Einstein put the wrong number in his famous E=mc2 equation.

University of Minnesota physicist Marvin Marshak was part of the experiment, called MINOS. It clocked beams of neutrinos shot from Fermilab, a national physics lab near Chicago, to a detector 457 miles away in the Soudan Underground Laboratory in northern Minnesota. 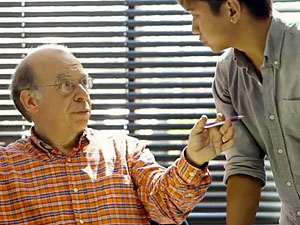 Physics professor Marvin Marshak is part of the MINOS experiment to study neutrinos and compare their speed to the speed of light. Image credit: University of Minnesota

“Our data showed that neutrinos go faster than light, but the experimental error was too large to draw a conclusion,” Marshak says. “We published the result, but we never pushed it.”

So the finding never made the news.

Then, in September, came a shocker from OPERA, a similar experiment in Europe. Not only did OPERA catch neutrinos exceeding the speed limit, but its error was much smaller, and media around the world trumpeted the possible demise of the world’s most famous equation.

Now, Marshak and MINOS are gearing up to settle the matter by performing the most precise measurements of neutrino speed possible. Whatever they find, the result is sure to make big waves in the scientific world.

Neutrinos barely beat out their luminous rival, however.

Most physicists stand by Einstein, unwilling to discard his theory on the basis of one report, namely OPERA. But the only experiment that can confirm or debunk it is MINOS. The world has just one other experiment, in Japan, that could measure neutrino speed. But there the neutrinos travel only 168 miles—not enough for tiny differences in speed to show up.

The one thing MINOS needs to settle the issue is a more precise way to time neutrinos. Recently, the U.S. Naval Observatory agreed to lend MINOS two atomic clocks, which promise to remove much of the uncertainty about that source of experimental error.

The atomic clocks measure time according to the vibrations of cesium atoms—more than 9 billion per second—and are the most precise clocks known. They are scheduled to be calibrated and in place by March, so Marshak expects reliable data next spring.

… or right after all?

If it turns out that neutrinos can indeed outrun light, that doesn’t necessarily mean Einstein was wrong in positing the speed of light in a vacuum as the universal limit, Marshak says. Perhaps it really is the limit, but it has never been accurately measured because even deep space isn’t a true vacuum.

Maybe, Marshak muses, the medieval concept of ether, a mysterious substance filling space, isn’t so far-fetched after all. Or perhaps dark energy, a recently discovered but equally mysterious force thought to be accelerating the expansion of the Universe, is slowing light down. Conceivably, anything in space that interacts with light could slow it down, just as glass and air do.

Marshak also notes that when a much-studied supernova appeared in 1987, neutrinos from the cataclysm reached the Earth at the same time as visible light.

“If the OPERA finding were true, neutrinos would have arrived four days earlier,” he notes.