Diamonds and Dust for Better Cement

It’s no surprise that humans the world over use more water, by volume, than any other material. But in second place, at over 17 billion tons consumed each year, comes concrete made with Portland cement. Portland cement provides the essential binder for strong, versatile concrete; its basic materials are found in many places around the globe; and, at about $100 a ton, it’s relatively cheap. Making it, however, releases massive amounts of carbon dioxide, accounting for more than five percent of the total CO2 emissions from human activity.

“Portland cement is the most important building material in the world,” says Paulo Monteiro, a professor of civil and environmental engineering at the University of California at Berkeley, “but if we are going to find ways to use it more efficiently – or just as important, search for practical alternatives – we need a full understanding of its structure on the nanoscale.” To this end Monteiro has teamed with researchers at the U.S. Department of Energy’s Advanced Light Source (ALS) at Lawrence Berkeley National Laboratory.

Most recently, at ALS beamline 12.2.2, Monteiro and his colleagues gradually squeezed specks of fine dust of the mineral tobermorite between faces of two diamonds in a diamond anvil cell, until they achieved pressures like those 100 miles below the surface of Earth. This was the first experiment to determine tobermorite’s bulk modulus – its “stiffness” – from diffraction patterns obtained by sending a bright beam of x‑rays through the sample, revealing how its structure changed as the pressure increased. 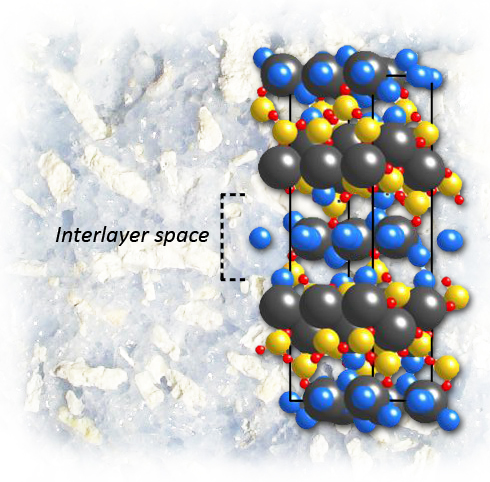 In nanoscale studies of calcium-silicate-hydrate, a binder critical to the strength and durability of Portland cement, the mineral tobermorite is a perfect stand-in for determining the crystal structure of this extraordinarily complex material. Highly structured layers of calcium and oxygen atoms alternate with “interlayers” of silicon, oxygen, calcium, and water molecules, where disorder may occur and adversely affect the material’s properties. (Crystal structure of 14Å tobermorite as refined by Bonaccorsi et al). Image credit: Berkeley Lab

The results, which will appear in Cement and Concrete Research and are now available online to subscribers, led to new insights into calcium-silicate-hydrate (C‑S‑H), the material primarily responsible for the strength and durability of concrete made with Portland cement.

Cement on the nanoscale

Portland cement is made by baking limestone (calcium carbonate) and clay (silicates) in a kiln at over 1400 degrees Celsius to make “clinker,” which is then ground to a powder. When the powder is mixed with water, calcium-silicate-hydrate (C-S-H) is formed, which, although poorly crystallized, is a binder critical to the strength and durability of the cement paste.

“We and many other groups have developed sophisticated computer models to understand the crystal structure and mechanical behavior of C‑S‑H, based on observations of how it performs,” says Monteiro. “But we’re the only group that uses minerals to validate the results of our models with experimental results.”

Despite the many studies and vast literature on cements and their components, the atomic scale structure of C-S-H, owing to its high complexity, is still imperfectly known. While the mineral tobermorite, a calcium silicate hydrate named for a quaint village on the Scottish Isle of Mull, is far less common than the makings of Portland cement, one of its structures, designated 14Å tobermorite, is a perfect stand‑in for C-S-H in nanoscale studies. 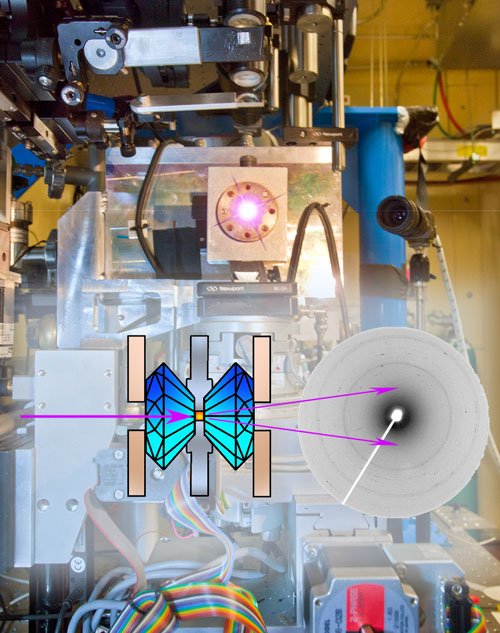 At Calipso, the California High-Pressure Science Observatory at beamline 12.2.2 of the Advanced Light Source, materials can be squeezed to tremendous pressures in diamond anvil cells, where they are trapped between the two diamonds in a small central chamber. The x-rays from the beamline pass through the diamonds and the sample, throwing diffraction patterns on a CCD detector that reveal the material’s structure. (Signals from diamond and corundum in the anvil cell mechanism must be subtracted from the diffraction patterns.) (Beamline photo by Roy Kaltschmidt)

The studies were performed at beamline 12.2.2, the California High-Pressure Science Observatory (Calipso), which is supported by the National Science Foundation. Calipso is equipped with a choice of diamond anvil cells, arranged so the x‑ray beam passes through the diamonds and the sample chamber between them. The diffracted x-rays fall on a CCD detector, and the diffraction patterns can be used to determine the structure of the material in the cells.

The tiny sample of tobermorite that Monteiro’s team used at the ALS originally came from Southern California and was obtained from the Los Angeles County Museum. The researchers ground it to a fine powder and suspended it in liquid so that the diamond anvil cell would apply even hydrostatic pressure to every grain in the sample chamber – an opening in a metal gasket only 180 millionths of a meter in diameter.

“While it’s possible to do x-ray diffraction with diamond anvil cells on a laboratory bench,” says ALS beamline scientist Simon Clark, a co-author of the research, “you can’t deal with samples this small without the brightness of a synchrotron light source. Even if you could, what takes eight hours in the lab we can do in half a minute – although we usually take at least a minute so the researchers can write everything down in their notebooks.”

Putting on the squeeze

As the experiments proceeded, the flattened points of the cell’s two diamonds were slowly tightened, concentrating pressure on the gasket and the contents of the sample chamber. The x-ray diffraction patterns revealed any changes in the arrangement of atoms in the crystal structure.

Says Monteiro, “The diffraction patterns give us the lattice parameters of the tobermorite structure.” Lattice parameters allow the volume of the unit cells, the material’s fundamental atomic arrangements, to be calculated in three directions. “We watch how the lattice parameters change as the pressure changes, using them as a strain gauge. By knowing the applied pressure in the anvil cell, we can compute the bulk modulus.”

In C-S-H the calcium, silicon, and oxygen atoms are arranged in a stack of flat layers. Highly structured layers of calcium and oxygen atoms alternate with “interlayers” of silicon, oxygen, calcium, and water molecules. In the plane of the layers (the a and b directions of the lattice parameters), tobermorite is very stiff indeed, changing very little as pressure increases. Perpendicular to the plane, along the c-axis, tobermorite is more compressible, but not by much.

Even in the c direction, pure tobermorite is stiffer than a synthetic version of C-S-H the Monteiro team also tested, and to which they compared it. The calcium-oxygen layers in the synthetic C-S-H were similar to those in the tobermorite, so when altered silicon chains were deliberately introduced into the synthetic in order to mimic the disorder of natural C‑S‑H, it still retained its stiffness in the a-b plane. But along the c-axis, the disordered synthetic C-S-H grew significantly more squeezable.

“It’s the interlayers that compress, and only along the c-axis,” says Monteiro. “Differences in interlayer spacing, degrees of disorder in the silicon chains, additional calcium ions, and water molecules all make the bulk modulus of the two materials virtually the same in the a-b plane, but different along the c‑axis. The discovery suggests a number of possibilities for improving the performance of cement – for example, one might introduce special polymers into the C-S-H interlayers to shape its behavior. This will certainly be an area for our future research.”