ANN ARBOR, Mich.— A technique that lets researchers monitor single cancer cells in real time as they float in liquid could help doctors study the breakaway tumor cells that cause metastasis. Metastasis is the process of the disease spreading through the body.

The approach, developed at the University of Michigan, could also pave the way for new types of targeted therapies that go beyond personalized medicine, researchers say.

“We’re looking toward individualized treatment, not just to the person, but to the cell,” said Remy Elbez, a doctoral student in applied physics. He is a co-author of a paper on the work published Dec. 13 in PLoS ONE.

In recent years, researchers have come to understand that not all cells in a cancerous tumor share the same genetic code. This means some are more difficult to kill than others. And techniques that enable single-cell study are in demand. Approaches that process many cells at once aren’t as useful for researchers who want to look, for example, at a small number of cells that a particular cancer drug left alive. 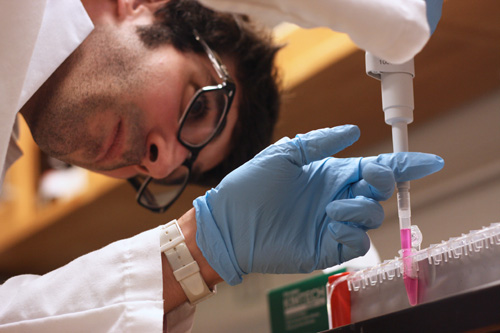 Remy Elbez, a doctoral student in applied physics, takes a sample of a solution that contains magnetized cervical cancer cells. He will place several drops of the solution in a special magnetic field. Then, after placing the whole apparatus under a microscope, he can watch the cells spin on a screen and determine their shape and status from their rotation rates. This new technique could help doctors understand the process of cancer metastasis. Photo by Nicole Casal Moore

One particularly dangerous type of cancer cell that scientists want to know more about is the circulating tumor cell. These cells have separated from the original tumor and set off in the bloodstream to invade distant tissues. Scientists know that they’re different from the cells that stay put. They don’t divide rapidly, for example. At the same time, they’re difficult to study for several reasons. They’re hard to find because they only make up less than one in a trillion blood cells. And they operate in motion, so tamping them down to a Petri dish doesn’t reveal their true nature.

“In our suspension, the cells can flow freely and behave closer to the way they do in the body,” said Raoul Kopelman, the Richard Smalley Distinguished University Professor of Chemistry, Physics and Applied Physics, and a professor in biomedical engineering and biophysics.

“This is a completely new technique for monitoring a single cell’s growth and death processes in real time in a suspension.”

A better understanding of circulating tumor cells could one day lead to therapies that focus on them, and help to block cancer from spreading beyond its initial site, the researchers say. That could lengthen patients’ lives.

“It is the consequences of metastasis that lead to the death of most cancer patients,” said Kenneth Pienta, M.D., a professor of internal medicine and urology who studies cancer metastasis.

Their approach uses magnets to rotate cancer cells in a way that lets their spinning speed reveal their shape and status. A growing, dividing or dying cell spins slower in the researchers’ system. To demonstrate that their technique works, they embedded cervical cancer cells with commercially available magnetic nanoparticles in a solution. They then placed the solution in a magnetic field that rotates fast enough to achieve an asynchronous rotation rate. Because of the asynchronous rotation, the cells are more affected by drag and the larger, dying or dividing cells rotate much slower, and with specific patterns.

“For the first time, we enable the cell itself to be the sensor. It can tell us when it is dying,” Elbez said. “Other methods such as fluorescent dyes rely on indirect evidence.”

The new system could advance drug testing, the researchers say. It could enable scientists to zero in on the most resistant cells.

It could also pave the way for more personalized cancer treatment. In essence, mini drug-trials could be conducted on a small sample of tumor cells before subjecting patients to rounds of chemotherapy that may or may not work.

“Personalized cancer treatments allow for treatment of the right patient at the right time with the right medicine,” Pienta said. “More importantly, it can avoid treatment with the wrong medicine, which does the patient no good and wastes money.”

The paper is titled “Nanoparticle induced cell magneto-rotation: Monitoring morphology, stress and drug sensitivity of a suspended single cancer cell.” In addition to Elbez, Kopelman and Pienta, other co-authors are Brandon McNaughton and Lalit Patel. The researchers are working to commercialize this technology. McNaughton is a founder of the U-M start-up Life Magnetics. The research is funded by the National Institutes of Health.