Post-menopausal women who experience breast tenderness after starting combination hormone therapy have a higher risk of breast cancer than women who don’t, a study by researchers with UCLA’s Jonsson Comprehensive Cancer Center has shown. One reason for this, they now say, may be that these women’s breasts are becoming more dense.

Such new-onset tenderness was found to be more pronounced after the start of combination estrogen-and-progestin therapy than with estrogen therapy alone. The link between new-onset tenderness and changes in breast density also was more pronounced in women on combination therapy, said the study’s first author, Dr. Carolyn Crandall, a UCLA professor of general internal medicine and a scientist with the Jonsson Cancer Center.

Multiple population studies have shown that higher breast density is associated with an increased risk of breast cancer. For women with extremely dense breasts, the risk can be four to six times higher than for women whose breasts are not dense, Crandall said. 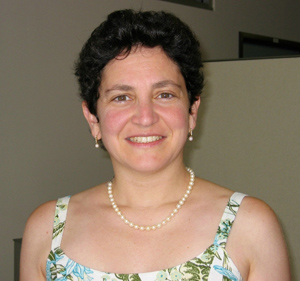 Although the present study design did not permit researchers to directly test whether combined hormone therapy–induced breast tenderness represents increased breast cell proliferation, mammographic density — which was analyzed in the study — is felt to be an indirect measure of breast tissue growth, Crandall said.

The study appeared Oct. 14 in the early online edition of the peer-reviewed journal Breast Cancer Research and Treatment.

For this prospective study, Crandall and her team examined the association between new-onset breast tenderness and changes in mammographic density after the initiation of hormone therapy in 695 women enrolled in the Women’s Health Initiative (WHI). Launched in 1991, the WHI consisted of a set of clinical trials and an observational study involving 161,808 generally healthy, post-menopausal women.

“New breast tenderness that begins after a woman initiates therapy with routine doses of estrogen is common and almost double that of women taking a placebo,” Crandall said. “It’s even higher in women who also are taking progestin — about three times higher than women given placebos.”

Among women assigned to combination therapy, the mean increase in mammographic density was greater among those reporting new-onset breast tenderness than among those without tenderness (11.3 percent versus 3.9 percent at year one, and 9.4 percent versus 3.2 percent at year two). However, for women who took estrogen alone, there was no difference in breast density between those who experienced new-onset tenderness and those who didn’t, Crandall said.

That is important, she said, because estrogens can increase the risk of uterine cancer and often are paired with progestin to prevent malignancies in women who haven’t had a hysterectomy. So while the combination protects women from uterine cancer, it increases their risk of developing breast cancer.

In 2009, Crandall’s team, using the WHI data, had shown that women who experienced new-onset breast tenderness after initiating combination hormone therapy had a 48 percent higher risk of subsequent breast cancer than women who didn’t have tenderness.

These new findings shed light on the biology that might partly explain the link between new-onset tenderness and increased breast cancer risk during combination therapy, Crandall said. Understanding the factors associated with mammographic density changes during therapy with estrogen and progestin may help provide biological insights into hormonetherapy–associated breast cancer risk.

“These findings emphasize the complexity inherent in the use of surrogate risk markers to assess menopausal hormone therapy–associated breast cancer risk,” the study concludes.

The study was funded in part by the National Heart, Lung and Blood Institute; the National Institutes of Health; the U.S. Department of Health and Human Services; and the Eileen Ogle Award of the Iris Cancer–UCLA Women’s Health Center.