A new advance by UCLA biochemists has brought scientists one step closer to developing treatments that could delay the onset of Alzheimer’s disease and prevent the sexual transmission of HIV.

The researchers report that they have designed molecular inhibitors that target specific proteins associated with Alzheimer’s disease and HIV to prevent them from forming amyloid fibers, the elongated chains of interlocking proteins that play a key role in more than two dozen degenerative and often fatal diseases.

“By studying the structures of two key proteins that form amyloids, we were able to identify the small chain of amino acids responsible for amyloid fiber formation and engineer a ‘molecular cap’ that attaches to the end of the fibers to inhibit their growth,” said research leader David Eisenberg, director of the UCLA–Department of Energy Institute of Genomics and Proteomics and a Howard Hughes Medical Institute investigator.

The study was published online June 15 in the journal Nature and will be available in an upcoming print edition.

“This research is an important first step toward the development of structure-based drugs designed against amyloid diseases,” said Eisenberg, who is a UCLA professor of chemistry, biochemistry and biological chemistry and a member of the California NanoSystems Institute at UCLA. “Our results have opened up an avenue so that universities and industry can start creating therapeutics that could not have been produced 10 years ago.”

Amyloid fibers are elongated, water-tight structures formed from two linked protein sheets. Proteins from each sheet contribute side chains, causing them to interlock like the teeth of a zipper, Eisenberg said. 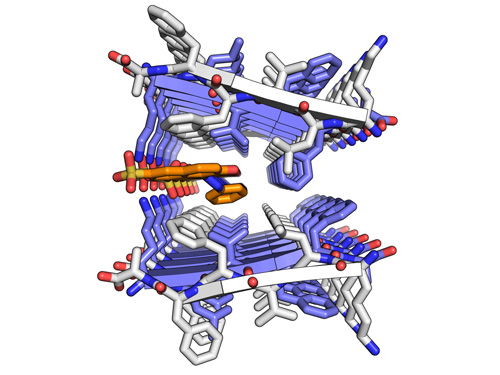 Segment of protein that forms amyloid fibers in Alzheimer's. Crystal structure of a segment from the amyloid-beta protein that forms amyloid fibers in Alzheimer's disease. Normally the two protein sheets are tightly associated in the spine of the fiber but in this case orange-G has wedged its way between the two sheets. Image credit: David Eisenberg, director of the UCLA-DOE Institute of Genomics & Proteomics, Howard Hughes Medical Institute investigator, and UCLA postdoctoral fellow Meytal Landau

The fibers are found not only Alzheimer’s disease but in a variety of conditions, including Lou Gehrig’s disease, Parkinson’s disease, type II diabetes and a family of disorders related to mad cow disease, among others. In Alzheimer’s and other neurodegenerative diseases, the tau protein forms amyloid fibers inside brain cells, destroying them through a mechanism that is still being investigated.

Though many serious diseases are characterized by amyloid fibers, Alzheimer’s is the most prevalent, Eisenberg said. Today there are 5 million patients in the U.S. who suffer from Alzheimer’s, with 500,000 new cases every year. Alzheimer’s health care cost this year alone have been estimated at $178 billion, including the value of unpaid care for Alzheimer’s patients provided by nearly 10 million family members and friends.

“By the year 2050, it is projected that there will be 19 million Alzheimer’s patients,” Eisenberg said. “The care of so many patients with this debilitating illness could be a substantial fraction of the gross domestic product of the United States.”

Eisenberg and his research team found that of the entire tau protein, a small chain of just six amino acids — abbreviated VQIVYK — was responsible for the formation of amyloid fibers. By studying the structure of the fibers using microcrystallography, a method developed at UCLA for this research, the team was able to use the fibers as a template to design an inhibitor that could ‘cap’ the fiber and stop it from growing. 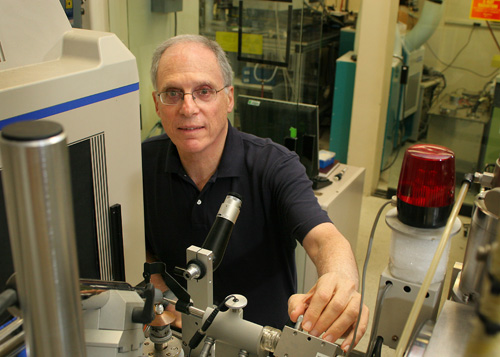 The results were dramatic. The introduction of the inhibitor into a tau protein solution completely prevented amyloid fiber formation, validating the idea that the structure-based design of therapeutics for amyloid diseases is a plausible option.

Despite this success, there is still a long road ahead before a viable therapeutic can be developed to combat the onset of Alzheimer’s in human patients, Eisenberg said. The inhibitor, a chain of amino acids, is far too large to penetrate deep into the brain where the tau proteins form amyloid fibers.

“This research is an important step toward identifying smaller molecules that can be utilized to develop a therapeutic,” Eisenberg said. “Our goal is to be able to delay the onset of Alzheimer’s disease.”

Preventing the transmission of HIV

Unlike the tau protein, the SEVI (semen-derived enhancer of viral infection) protein is a far more accessible target for a molecular blocker because it builds amyloid fibers in a vaginal environment, a key process in the sexual transmission of HIV, Eisenberg said.

Though the tau and SEVI proteins have different structures and unrelated functions, they both form amyloid fibers with similar morphology, making it possible to design two separate inhibitors using the same process, according to Eisenberg.

The SEVI blocker proved to be equally effective in preventing fiber growth, bolstering the idea that blockers can be designed for other diseases associated with amyloid fibers as well.

“Though many tests remain, it seems we could be on the way to developing a therapeutic,” Eisenberg said. “Our hope is that we could make a blocker that could be applied with a vaginal gel or spray that would help to prevent HIV infection.”

The tau and SEVI protein inhibitors were designed using synthetic amino acids, similar to the standard protein building blocks of the human body. But these synthetic amino acids were flipped, as if viewed in a mirror, or had added side chains not normally found in nature. Enzymes in the human body that are programmed to break apart protein-like chains are, in principle, unable to recognize the non-natural amino acids, keeping the blockers safe to latch on to the target proteins.

This research was federally funded by the National Institutes of Health, the National Science Foundation and the U.S. Department of Energy, as well as by the Howard Hughes Medical Institute and the Joint Center for Translational Medicine.

A second research team also led by Eisenberg recently announced that it had identified four small molecules that bind to amyloid fibers, including a promising candidate called ‘orange-G’ that wedges into the zipper-like fiber and may be able to break it apart.

This study was published June 14 in PLoS Biology, an online journal of the Public Library of Science.

“These are the first small molecules visualized as they bind to amyloid-like fibers,” Eisenberg said. “These small molecules are less likely to be broken up in the body and can potentially be modified to force apart amyloid fibers or serve as diagnostic tools to identify infected areas of the body.”

Eisenberg and his research team found that orange-G was uniquely able to pierce the impenetrable “steric zippers” that seal the water-tight amyloid fibers of the amyloid-beta protein that is responsible for forming senile plaques in Alzheimer’s disease.

“In 10 years we have gotten to the point where we are starting to understand the structural biology of amyloid fibers and how to inhibit them and how to interfere with them,” Eisenberg said. “The next step is to make practical molecules that inhibit and break amyloid fibers — that is the ultimate goal.”