AUSTIN, Texas — An international team of geoscientists has discovered an unusual geological formation that helps explain how an undersea earthquake off the coast of Sumatra in December 2004 spawned the deadliest tsunami in recorded history.

Instead of the usual weak, loose sediments typically found above the type of geologic fault that caused the earthquake, the team found a thick plateau of hard, compacted sediments. Once the fault snapped, the rupture was able to spread from tens of kilometers below the seafloor to just a few kilometers below the seafloor, much farther than weak sediments would have permitted. The extra distance allowed it to move a larger column of seawater above it, unleashing much larger tsunami waves.

“The results suggest we should be concerned about locations with large thicknesses of sediments in the trench, especially those which have built marginal plateaus,” said Sean Gulick, research scientist at The University of Texas at Austin’s Institute for Geophysics. “These may promote more seaward rupture during great earthquakes and a more significant tsunami.” 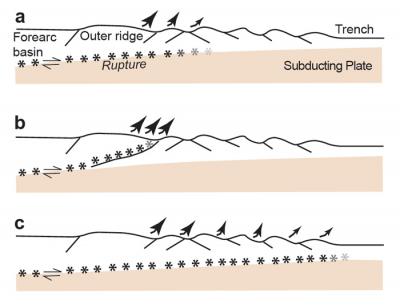 At a typical subduction zone, the fault ruptures primarily along the boundary between the two tectonic plates and dissipates in weak sediments (a), or ruptures along "splay faults" (b); in either case, stopping far short of the trench. In the area of the 2004 Sumatra earthquake, sediments are thicker and stronger, extending the rupture closer to the trench for a larger earthquake and, due to deeper water, a much larger tsunami. Image credit: The University of Texas at Austin

The team’s results appear this week in an article lead-authored by Gulick in an advance online publication of the journal Nature Geoscience.

The team from The University of Texas at Austin, The University of Southampton in the United Kingdom, The Agency for the Assessment and Application of Technology in Indonesia and The Indonesia Institute for Sciences used seismic instruments, which emit sound waves, to visualize subsurface structures.

Early in the morning of Dec. 26, 2004, a powerful undersea earthquake started off the west coast of Sumatra, Indonesia. The resulting tsunami caused devastation along the coastlines bordering the Indian Ocean with tsunami waves up to 30 meters (100 feet) high inundating coastal communities. With very little warning of impending disaster, more than 230,000 people died and millions became homeless.

The Sunda Trench is full of ancient sediment, some of which has washed out of the Ganges over millions of years forming a massive accumulation of sedimentary rock called the Nicobar Fan. As the Indo-Australian plate is subducted, these sediments are scraped off to form what’s called an accretionary prism. Usually an accretionary prism slopes consistently away from the trench, but here the seabed shallows steeply before flattening out, forming a plateau.

Subduction earthquakes are thought to start tens of kilometers beneath the Earth’s surface. Displacement or “slip” on the fault, as geologists call it, propagates upwards and generally dissipates as it reaches weaker rocks closer to the surface. If it were an ordinary seismic zone, the sediment in the Sunda Trench should have slowed the upward and westward journey of the 2004 earthquake, generating a tsunami in the shallower water on the landward (east) side of the trench.

But in fact the fault slip seems to have reached close to the trench, lifting large sections of the seabed in deeper water and producing a much larger tsunami.

This latest report extends work published last year in the journal Science that found a number of unusual features at the rupture zone of the 2004 earthquake such as the seabed topography, how the sediments are deformed and the locations of small earthquakes (aftershocks) following the main earthquake. The researchers also reported then that the fault zone was a much lower density zone than surrounding sediments, perhaps reducing friction and allowing a larger slip.

Funding for the research was provided by the U.S. National Science Foundation (NSF) and the UK Natural Environment Research Council.

A copy of the paper, “Updip rupture of the 2004 Sumatra earthquake extended by thick indurated sediments,” is available online.