Galactan is a polymer of galactose, a six-carbon sugar that can be readily fermented by yeast into ethanol and is a target of interest for researchers in advanced biofuels produced from cellulosic biomass. Now an international collaboration led by scientists at the U.S. Department of Energy (DOE)’s Joint BioEnergy Institute (JBEI) has identified the first enzyme capable of substantially boosting the amount of galactan in plant cell walls.

Unlike ethanol, advanced biofuels synthesized from the sugars in plant cells walls could replace gasoline, diesel and jet fuels on a gallon-for-gallon basis and be dropped into today’s engines and infrastructures with no modifications required. Also, adanced biofuels have the potential to be carbon-neutral, meaning they could be burned without adding excess carbon to the atmosphere. Among the key challenges to making advanced biofuels cost competitive is finding ways to maximize the amount of plant cell wall sugars that can be fermented into fuels. 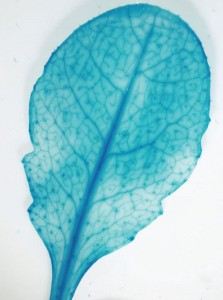 JBEI researchers generated Arabidopsis plants that overexpressed a GT92 enzyme, resulting in a a 50-percent increase in the amount of in the plant cell walls. Image credit: Berkeley Lab (Click image for larger view)

“We have confirmed the identity of the GT92 enzyme as the first enzyme shown to increase the biosynthesis of galactan,” says Henrik Scheller, vice president for JBEI’s Feedstocks Division and director of its Cell Wall Biosynthesis group. “This identification of the first β-1,4-galactan synthase provides an important new tool for the engineering of advanced bioenergy fuel crops.”

Scheller, who also holds an appointment with DOE’s Lawrence Berkeley National Laboratory (Berkeley Lab), is the corresponding author of a paper in the journal Plant Cell that describes this work. The paper is titled “Pectin Biosynthesis: GALS1 in Arabidopsis thaliana is a β-1,4-Galactan β-1,4-galactosyltransferase.” Co-authors were JBEI’s April Liwanag, Berit Ebert, Yves Verhertbruggen, Emilie Rennie, Carsten Rautengarten, and Ai Oikawa, plus Mathias Andersen and Mads Clausen of the Technical University of Denmark.

Galactans are polysaccharide components of pectin, the sticky sugar substance that binds together the individual cells in plant cell walls and is used to make jellies and jams. The β-1,4-galactan component of pectin is especially abundant in the “tension wood” that forms in cell walls in response to mechanical stress from wind or snowfall.

“Galactans are composed of hexoses, which in contrast to pentoses, are easily utilized by fermenting microorganisms for the production of biofuels and other compounds,” Scheller says. “It would be advantageous to develop plants with increased galactan content instead of hemicelluloses consisting largely of pentoses.”

GT92 is a family of glycosyltransferase proteins whose genes are found in all plants that have been genetically sequenced. An increased expression of GT92 genes has been observed in studies of tension wood. This observation combined with the knowledge that tension wood is rich in β-1,4-galactan led Scheller and his colleagues to investigate the function of GT92 proteins in Arabidopsis thaliana, a small flowering relative of mustard that serves as a model organism for plant studies. Arabidopsis has three members of GT92, which Scheller and his colleagues designated as GALACTAN SYNTHASE 1,2 and 3 (GALS1, GALS2 and GALS3). While loss-of-function mutants in all three genes were found to be galactan deficient, Scheller and his colleague isolated and tested GALS1.

“Overexpression of GALS1 resulted in plants with 50-percent higher β-1,4-galactan content and no adverse phenotype,” Scheller says. “We expect that the results for GALS2 and GALS3 overexpressors will be similar though we have yet to test them.” 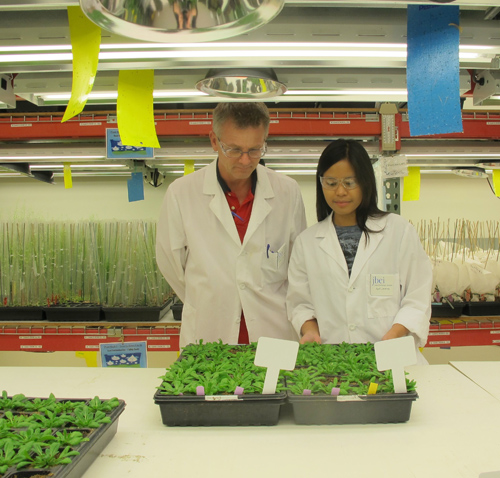 JBEI researchers Henrik Scheller and April Liwanag led a study in which the first enzyme capable of increasing the biosynthesis of galactan was identified. Image credit: Berkeley Lab

Given that all three Arabidopsis GALS genes showed overlapping but not identical expression, Scheller and his colleagues are now combining mutations of GALS genes to better understand the role of β-1,4-galactan in plants. They’re also carrying out basic studies on these enzymes, including crystallization and structural analysis. In addition, they’re overexpressing the GALS proteins in different combinations to determine if even higher production of β-1,4-galactan results.

“As β-1,4-galactan is an ancient invention, the function of GT92 as a galactan synthase in Arabidopsis should also be applicable to switchgrass, Miscanthus, poplar and other plants being considered as crops for advanced biofuels,” Scheller says. “We do not anticipate any difficulty in being able to overexpress GT92 genes in these plants.”

This research was funded by the DOE Office of Science, and by the Danish Strategic Research Council.