Public Obsession with Obesity May be More Dangerous than Obesity Itself, UCLA Author Says

Much has been made about who or what is to blame for the “obesity epidemic” and what can or should be done to stem the tide of rising body mass among the U.S. population.

A new book by a UCLA sociologist turns these concerns on their head by asking two questions. First, how and why has fatness been medicalized as “obesity” in the first place? Second, what are the social costs of this particular way of discussing body size? 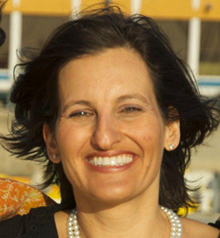 In “What’s Wrong With Fat?“, to be published Jan. 3 by Oxford University Press, Abigail Saguy argues that “obesity” is far from a neutral scientific fact. Rather, it is a discrete perspective — what sociologists call a “frame” — that draws attention to certain aspects of a situation while obscuring others.

“The very term ‘obesity’ suggests that weighing over a certain amount is pathological,” says Saguy, an associate professor of sociology. “This perspective shuts out other interpretations of fat as, say, potentially healthy, an aspect of beauty, or even as a basis for civil rights claims resulting from discrimination, which has been well documented.”

In discussing blame and responsibility for the so-called obesity epidemic, scientists, journalists and politicians alike tend to focus on individual responsibility, she argues. And in doing so, they gloss over the ways in which body size is tightly controlled by genetic factors and shaped by social factors, such as socioeconomic status and neighborhood limitations, including poor access to healthy food outlets, a high density of fast food restaurants and a lack of open space for exercise.

“What’s Wrong With Fat?” shows how debates over the best way to discuss body size — including as either a health or civil rights problem — do not take place on an even playing field. Saguy contends that powerful interests benefit from drawing attention to the “crisis,” including the International Obesity Task Force (a lobbying group funded by pharmaceutical companies), obesity researchers and the Centers for Disease Control and Prevention.

On the other hand, fat-acceptance groups, which try to reframe fatness as a civil rights issue, are at a disadvantage because they have considerably less economic power and cultural authority, she says.

Saguy is careful to point out that she doesn’t deny the health risks associated with higher body mass. The clearest case is Type 2 diabetes, which becomes more likely as an individual’s weight goes up. Yet she cites medical research showing that even this association may not be causal.

“It’s not clear whether obesity per se causes diabetes, whether diabetes causes obesity or whether both conditions are caused by a third factor, such as poor nutrition, stress or genetic factors,” she says.

Saguy also points to evidence that obese patients with heart disease or diabetes have been shown to have lower mortality rates than their thinner counterparts, a phenomenon scientists have dubbed the “obesity paradox.” Yet, she says, “To listen to the media, you’d think that there’s unanimity on the need to lose weight.”

In the book, Saguy explains how “confirmation bias” — a term used by sociologists to explain why people tend to give more credence to arguments that are consistent with their existing beliefs — leads scientists, journalists and politicians alike to downplay the complexity and scientific uncertainty surrounding body size and health.

But beyond the incomplete and misleading information on the issue, America’s obsession with obesity is itself unhealthy, she argues.

Saguy cites studies demonstrating that fat women are reluctant to get medical care for fear of being chided about their weight or treated insensitively by their doctors. In fact, research has shown that obese women are more likely to get cervical cancer because they are less likely than thinner women to get pap smears.

Meanwhile, Saguy’s own research shows that people who read news accounts of the “obesity epidemic” are more likely than people who have not read such reports to perceive fat people as lazy, unmotivated, sloppy, and lacking in self-discipline and competence.

Those attitudes have been shown to play out in a variety of socially damaging ways, Saguy says, including in increasingly widespread weight discrimination. Recent research has shown, for example, that bias against fat people in employment, education, health care and other areas is now comparable in prevalence to reported rates of racial discrimination in the U.S.

Heavier women in particular, Saguy notes, are less likely to be hired and less likely to earn a higher salary, compared with their similarly qualified but thinner peers.

“American attitudes about fat may be more dangerous to public health than obesity itself,” she says.

“What’s Wrong With Fat?” encourages readers to step back from taken-for-granted assumptions of an obesity epidemic and to consider fatness in a new light.

“It’s possible to reframe ‘fat,’ and doing so can have profound implications in people’s lives,” says Saguy.