A dramatic leap forward in the ability of scientists to study the structural states of macromolecules such as proteins and nanoparticles in solution has been achieved by a pair of researchers with the U.S. Department of Energy (DOE)’s Lawrence Berkeley National Laboratory (Berkeley Lab). The researchers have developed a new set of metrics for analyzing data acquired via small angle scattering (SAS) experiments with X-rays (SAXS) or neutrons (SANS). Among other advantages, this will reduce the time required to collect data by up to 20 times.

“SAS is the only technique that provides a complete snapshot of the thermodynamic state of macromolecules in a single image,” says Robert Rambo, a scientist with Berkeley Lab’s Physical Biosciences Division, who developed the new SAS metrics along with John Tainer of Berkeley Lab’s Life Sciences Division and the Scripps Research Institute. 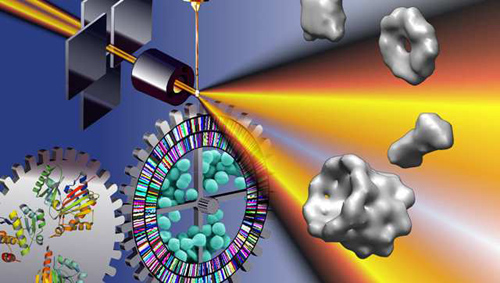 Small angle scattering (SAS) with X-rays (pictured here) or neutrons is the only imaging technique that provides a complete snapshot of the thermodynamic state of macromolecules in a single image. Image credit: Berkeley Lab

Rambo and Tainer describe their new SAS metrics in a paper titled “Accurate assessment of mass, models and resolution by small-angle scattering.” The paper has been published in the journal Nature.

Says co-author Tainer, “The SAS metrics reported in our Nature paper should have game-changing impacts on accurate high-throughput and objective analyses of the flexible molecular machines that control cell biology.”

In SAS imaging, beams of X-rays or neutrons sent through a sample produce tiny collisions between the X-rays or neutrons and nano- or subnano-sized particles within the sample. How these collisions scatter are unique for each particle and can be measured to determine the particle’s shape and size. The analytic metrics developed by Rambo and Tainer are predicated on the discovery by Rambo of an SAS invariant, meaning its value does not change no matter how or where the measurement was performed. This invariant has been dubbed the “volume-of-correlation” and its value is derived from the scattered intensities of X-rays or neutrons that are specific to the structural states of particles, yet are independent of their concentrations and compositions.

“The volume-of-correlation can be used for following the shape changes of a protein or nanoparticle, or as a quality metric for seeing if the data collection was corrupted,” Rambo says.  “This SAS invariant applies equally well to compact and flexible  particles, and utilizes the entire dataset, which makes it more reliable than traditional SAS analytics, which utilize less than 10-percent of the data.” 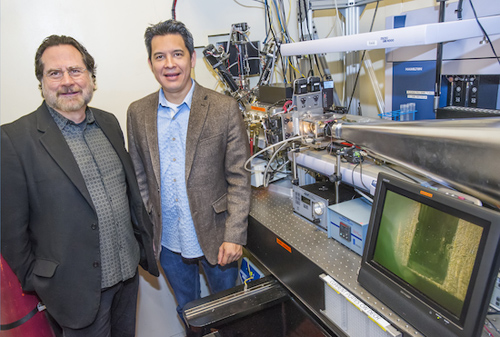 The volume-of-correlation was shown to also define a ratio that determines the molecular mass of a particle. Accurate determination of molecular mass has been a major difficulty in SAS analysis because previous methods required an accurate particle concentration, the assumption of a compact near-spherical shape, or measurements on an absolute scale.

“Such requirements hinder both accuracy and throughput of mass estimates by SAS,” Rambo says. “We’ve established a SAS-based statistic suitable for determining the molecular mass of proteins, nucleic acids or mixed complexes in solution without concentration or shape assumptions.”

The combination of the volume-of-correlation with other metrics developed by Rambo and Tainer can provide error-free recovery of  SAS data with a signal-to-noise ratio below background levels. This holds profound implications for high-throughput SAS data collection strategies not only for current synchrotron-based X-ray sources, such as Berkeley Lab’s Advanced Light Source, but also for the next-generation light sources based on free-electron lasers that are now being designed.

“With our metrics, it should be possible to collect and analyze SAS data at the theoretical limit,” Rambo says. “This means we can reduce data collection times so that a 90- minute exposure time used by commercial instruments could be cut to nine minutes.”

Adds Tainer, “The discovery of the first x-ray scattering invariant coincided with the genesis of the Berkeley Lab some 75 years ago. This new discovery of the volume-of-correlation invariant unlocks doors for future analyses of flexible biological samples on the envisioned powerful next-generation light sources.

This research was funded through DOE’s Office of Science and the National Institutes of Health.