Taking before and after pictures of Martian terrain, researchers of the UA-led HiRISE imaging experiment have identified almost 250 fresh impact craters on the Red Planet. The results suggest Mars gets pummeled by space rocks less frequently than previously thought, as scientists relied on cratering rates of the moon for their estimates.

Scientists using images from NASA’s Mars Reconnaissance Orbiter, or MRO, have estimated that the planet is bombarded by more than 200 small asteroids or bits of comets per year forming craters at least 12.8 feet (3.9 meters) across.

Researchers have identified 248 new impact sites on parts of the Martian surface in the past decade, using images from the spacecraft to determine when the craters appeared. The 200-per-year planetwide estimate is a calculation based on the number found in a systematic survey of a portion of the planet.

The University of Arizona’s High Resolution Imaging Science Experiment, or HiRISE camera, took pictures of the fresh craters at sites where before and after images had been taken. This combination provided a new way to make direct measurements of the impact rate on Mars and will lead to better age estimates of recent features on Mars, some of which may have been the result of climate change. 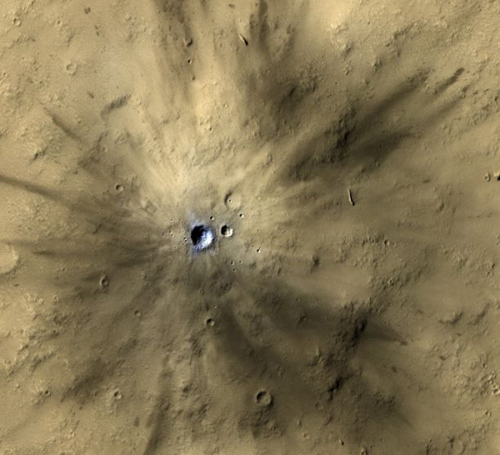 One of many fresh impact craters spotted by the UA-led HiRISE camera, orbiting the Red Planet on board NASA’s Mars Reconnaissance Orbiter since 2006. (Photo by: NASA/JPL-Caltech/MSSS/UA)

“It’s exciting to find these new craters right after they form,” said Ingrid Daubar of the UA, lead author of the paper published online this month by the journal Icarus. “It reminds you Mars is an active planet, and we can study processes that are happening today.”

These asteroids or comet fragments typically are no more than 3 to 6 feet (1 to 2 meters) in diameter. Space rocks too small to reach the ground on Earth cause craters on Mars because the Red Planet has a much thinner atmosphere.

HiRISE targeted places where dark spots had appeared during the time between images taken by the spacecraft’s Context Camera, or CTX, or cameras on other orbiters. The new estimate of cratering rate is based on a portion of the 248 new craters detected. If comes from a systematic check of a dusty fraction of the planet with CTX since late 2006. 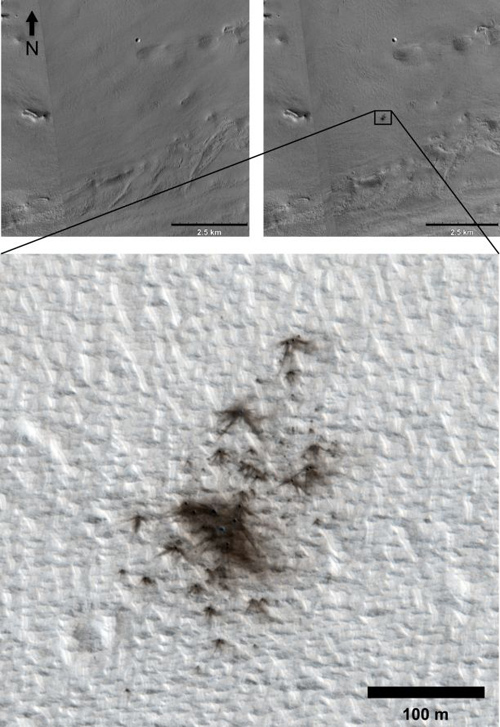 Images taken by the UA-led High Resolution Imaging Experiment, or HiRISE, reveal new impact craters that formed between 2010 and 2011. (Photo by: NASA/JPL-Caltech/MSSS/UA)

The impacts disturb the dust, creating noticeable blast zones. In this part of the research, 44 fresh impact sites were identified.

The meteor over Chelyabinsk, Russia, in February was about 10 times bigger than the objects that dug the fresh Martian craters.

Estimates of the rate at which new craters appear serve as scientists’ best yardstick for estimating the ages of exposed landscape surfaces on Mars and other worlds.

Daubar and co-authors calculated a rate for how frequently new craters at least 12.8 feet (3.9 meters) in diameter are excavated. The rate is equivalent to an average of one each year on each area of the Martian surface roughly the size of the U.S. state of Texas. Earlier estimates pegged the cratering rate at three to 10 times more craters per year. They were based on studies of craters on the moon and the ages of lunar rocks collected during NASA’s Apollo missions in the late 1960s and early 1970s.

“Mars now has the best-known current rate of cratering in the solar system,” said UA’s HiRISE Principal Investigator Alfred McEwen, a co-author on the paper. 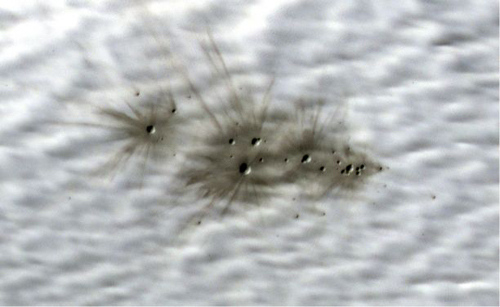 Mars gets blasted with space rocks much more frequently than Earth because they are less likely to burn up in its thinner atmosphere. (Photo by: NASA/JPL-Caltech/MSSS/UA)

MRO has been examining Mars with six instruments since 2006. Daubar is an imaging targeting specialist who has been on the HiRISE uplink operation s team from the very beginning. She is also a graduate student in the UA’s department of planetary science and plans on graduating with her doctorate in spring 2014.

“There are five of us who help plan the images that HiRISE will take over a two-week cycle,” she explained. “We work with science team members across the world to understand their science goals, help select the image targets and compile the commands for the spacecraft and the camera.”