A key to mass extinctions could boost food, biofuel production

Hydrogen sulfide, the pungent stuff often referred to as sewer gas, is a deadly substance implicated in several mass extinctions, including one at the end of the Permian period 251 million years ago that wiped out more than three-quarters of all species on Earth.

“We found some very interesting things, including that at the very lowest levels plant health improves. But that’s not what we were looking for,” said Frederick Dooley, a UW doctoral student in biology who led the research. 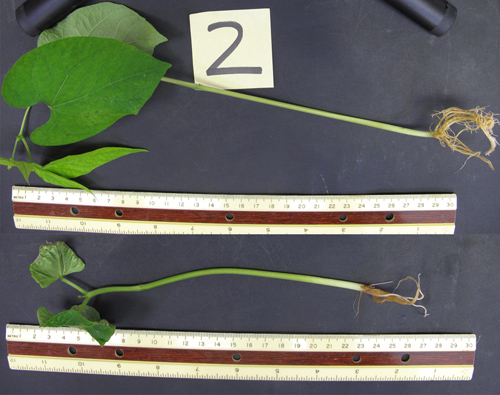 A bean plant treated with hydrogen sulfide (top) is substantially bigger at two weeks after gestation than the control plant (bottom) that was untreated. Image credit: Frederick Dooley

Dooley started off to examine the toxic effects of hydrogen sulfide on plants but mistakenly used only one-tenth the amount of the toxin he had intended. The results were so unbelievable that he repeated the experiment. Still unconvinced, he repeated it again – and again, and again. In fact, the results have been replicated so often that they are now “a near certainty,” he said.

“Everything else that’s ever been done on plants was looking at hydrogen sulfide in high concentrations,” he said.

The research is published online April 17 in PLOS ONE, a Public Library of Science journal.

At high concentrations – levels of 30 to 100 parts per million in water – hydrogen sulfide can be lethal to humans. At one part per million it emits a telltale rotten-egg smell. Dooley used a concentration of 1 part per billion or less to water seeds of peas, beans and wheat on a weekly basis. Treating the seeds less often reduced the effect, and watering more often typically killed them.

With wheat, all the seeds germinated in one to two days instead of four or five, and with peas and beans the typical 40 percent rate of germination rose to 60 to 70 percent.

“They germinate faster and they produce roots and leaves faster. Basically what we’ve done is accelerate the entire plant process,” he said. 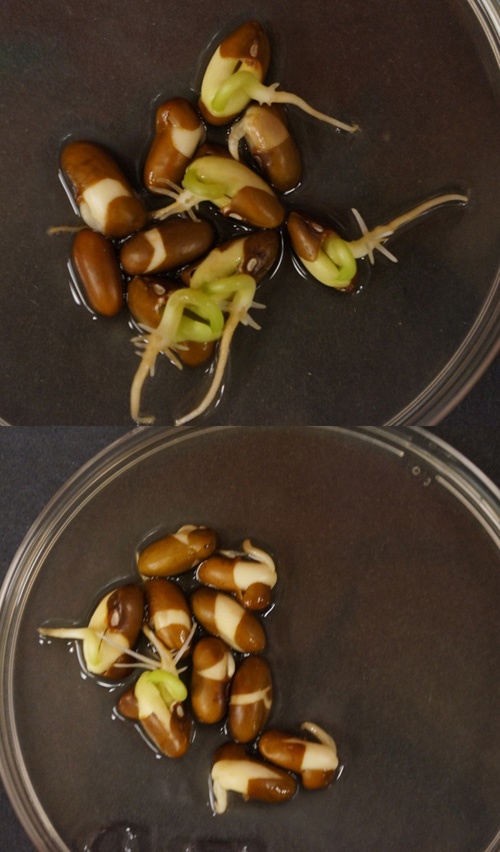 Hydrogen sulfide, probably produced when sulfates in the oceans were decomposed by sulfur bacteria, is believed to have played a significant role in several extinction events, in particular the “Great Dying” at the end of the Permian period. Ward suggests that the rapid plant growth could be the result of genetic signaling passed down in the wake of mass extinctions.

At high concentrations, hydrogen sulfide killed small plants very easily while larger plants had a better chance at survival, he said, so it is likely that plants carry a defense mechanism that spurs their growth when they sense hydrogen sulfide.

“Mass extinctions kill a lot of stuff, but here’s a legacy that promotes life,” Ward said.

Dooley recently has applied hydrogen sulfide treatment to corn, carrots and soybeans with results that appear to be similar to earlier tests. But it is likely to be some time before he, and the general public, are comfortable with the level of testing to make sure there are no unforeseen consequences of treating food crops with hydrogen sulfide.

The most significant near-term promise, he believes, is in growing algae and other stock for biofuels. Plant lipids are the key to biofuel production, and preliminary tests show that the composition of lipids in hydrogen sulfide-treated plants is the same as in untreated plants, he said.

When plants grow to larger-than-normal size, they typically do not produce more cells but rather elongate their existing cells, Dooley said. However, in the treatment with hydrogen sulfide, he found that the cells actually got smaller and there were vastly more of them. That means the plants contain significantly more biomass for fuel production, he said.

“If you look at a slide of the cells under a microscope, anyone can understand it. It is that big of a difference,” he said.

Ward and Suven Nair, a UW biology undergraduate, are coauthors of the PLOS ONE paper. The work was funded by the UW Astrobiology Program.