A River Ran Through It 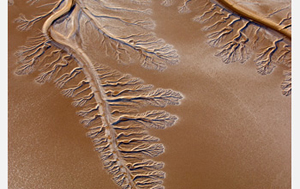 About the image: A now dry Colorado River delta branches into the Baja/Sonoran Desert near the Sea of Cortez. Image credit: Pete McBride

Rivers and streams supply the lifeblood to ecosystems across the globe, providing water for drinking and irrigation for humans as well as a wide array of life forms from single-celled organisms up to the fish humans eat.

But humans and nature itself are making it tough on rivers to continue in their central role to support fish species, according to new research by a team of scientists including John Sabo, a biologist at Arizona State University.

Globally, rivers and streams are being drained due to human use and climate change. These and other human impacts alter the natural variability of river flows.

Some affected rivers have dried and no longer run, while others have seen increases in the variability of flows due to storm floods.

The result is that humans and nature are conspiring to shorten food chains, particularly by eliminating top predators like many large-bodied fish.

“Floods and droughts shorten the food chain, but they do it in different ways,” said Sabo.

Sabo is the lead author of a paper reporting results of a study of 36 rivers in this week’s issue of the journal Science.

“The length of food chains is a crucial determinate of the functioning of ecosystems,” says Alan Tessier, program director in the National Science Foundation (NSF)’s Division of Environmental Biology, which funded the research.

“Ecologists have long sought to explain why food chain length varies among different ecosystems. This study provides a quantitative answer to that question for stream ecosystems, and provides critical evidence for the importance of flow variation.” 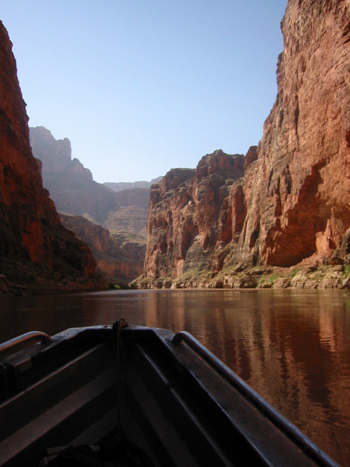 “The result is a simpler food web, but the effects we see for low flows are more catastrophic for fish–and are long-lasting.”

The researchers studied rivers and streams in the U.S. ranging in size from the Mississippi and Colorado Rivers, down to small tributaries.

The study employed naturally occurring stable isotopes of the element nitrogen to measure how top-predators were faring in the food chain.

Nitrogen provides an indicator as it bioaccumulates, increasing by 3.4 parts per million with each link in the food chain.

“Floods simplify the food web by taking out some of the intermediate players so the big fish begin to eat lower on the chain,” Sabo said.

“With droughts, it’s completely different: droughts eliminate the top predator altogether because many fish can’t tolerate the low oxygen and high temperatures that result when a stream starts drying out.”

He added that climate change will play a growing role in coming years.

“Climate is giving us a new set of operating terms to work with,” Sabo said. “We will experience overall drying and greater weather variability, both of which will shorten river food chains.

There will be drying in some regions, particularly along the equator, and increased flow in some rivers, primarily at higher latitudes, scientists believe. 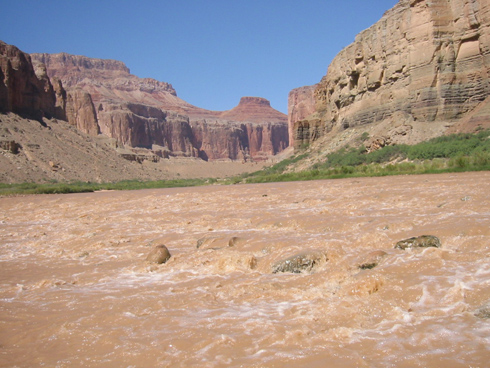 “We will see more variability because there will be change in the seasonality of storms,” said Sabo. “Ocean currents are changing, and the way the ocean blows storms our way is going to be different.”

The human effect on rivers and streams, and the food chain they support, is closely tied to land-use change, such as water diversion and regulation of flows due to dams.

As drought takes hold, the need for water for irrigation and agriculture increases and leads to a draw-down of natural river flows.

The effects downstream can be devastating.

“We would not have guessed that the infrequent drought that results would have a big effect on a stream, but our results show that it does,” Sabo said.

“Some streams affected by drying five to ten years ago are still missing large-bodied fishes, compared with same-sized streams that never dried.

“Food webs can recover sooner after a flood, in roughly a year, but it takes far longer to recover in the case of drying or drought.”

The study hints that competing users of a river’s water–for agricultural production and recreational uses like fishing–need to work out amenable uses of rivers and streams that not only look to the immediate future, but also project long-term effects.

“The question becomes: can you have fish and tomatoes on the same table?” Sabo asked.

“They compete for the same resources, and society depends on both: agriculture for grain, fruits, vegetables, and fish for protein, particularly in the developing world.

“Humans may need to make hard decisions about how to allocate water so that we grow the right food, but still leave enough in rivers to sustain fish populations.”