The ordinary squid, Loligo pealii—best known until now as a kind of floating buffet for just about any fish in the sea—may be on the verge of becoming a scientific superstar, providing clues about the origin and evolution of the sense of hearing.

In a hangar-like research building at the Woods Hole Oceanographic Institution (WHOI), biologist T. Aran Mooney is exploring virtually uncharted waters: Can squid hear? Is their hearing sensitive enough to hear approaching predators? How do squid and other marine species rely on sound to interact, migrate, and communicate? Will the burgeoning cacophony of sound in the ocean disrupt marine life’s behavior and threaten their survival?

“The sound in the ocean is increasing…commercial shipping, oil and gas exploration…those make a lot of noise,” Mooney says. “And you don’t know how that is going to affect the animal unless you know what it hears.”

Mooney, a postdoctoral scholar at WHOI, has undertaken seminal investigations into the hearing of this seminal creature in the marine food web.  His study is published Friday, Oct. 15, in the Journal of Experimental Biology

“Almost every type of marine organism feeds somehow off the squid,” says Mooney. Not just fish, but also many birds, seals, sea lions, and dolphins and toothed whales depend heavily on squid. Whales, according to Mooney, consume some 320 metric tons of squid a year; people eat another 280 metric tons annually. 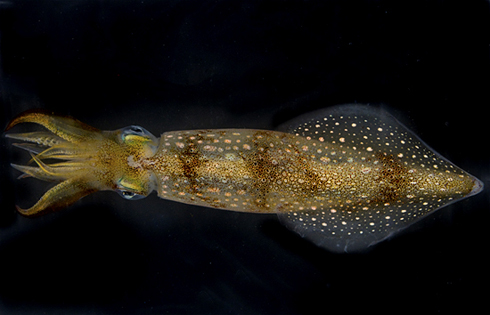 About the image: The squid species Loligo pealii is the object of WHOI biologist Aran Mooney’s research on the mechanism of hearing. Image credit: Tom Kleindinst, Woods Hole Oceanographic Institution

Mooney says it may be the squid’s role as a predator’s entrée that holds the key to understanding the importance of hearing among squid and other ocean creatures. This is because predator avoidance is a key pressure for evolving hearing capabilities.  If you can hear your predators approaching, you have a better chance of avoiding them.  Eventually, he said, a better understanding of how squid hear may shed light on human hearing as well.

Despite their importance in the marine food web, little is known about how well squid hear and whether they rely on hearing to navigate, sense danger, and communicate with each other. Until recently, it wasn’t clear that they even hear at all.

It is known now, through the work of Mooney and others, that the squid hearing system has some similarities and some differences compared to human hearing. Squid have a pair of organs called statocysts, balance mechanisms at the base of the brain that contain a tiny grain of calcium, which maintains its position as the animal maneuvers in the water. These serve a function similar to human ear canals.

Each statocyst is a hollow, fluid-filled sac lined with hair cells, like human cochlea. On the outside of the sac, the hair cells are connected to nerves, which lead to the brain. “It’s kind of like an inside-out tennis ball,” Mooney said, “hairy on the inside, smooth on the outside.” 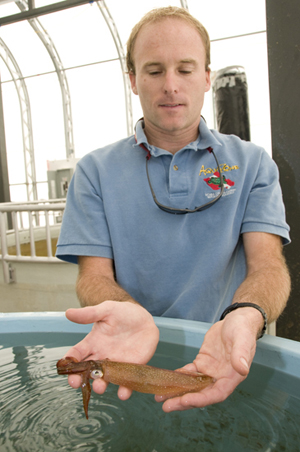 The calcium grain, called a statolith, enables the squid to sense its position in the water, based on which hair cells it’s in contact with at a given moment. Normally it rests near the front of the sac, touching some of the hair cells.

When a squid moves quickly—as it does when it flees an approaching predator—the heavy calcium stone lags behind slightly before catching up to the hair cells. “Kind of like your stomach on a roller coaster,” Mooney said. “The hair cells are very sensitive and can detect the calcium statolith lagging behind, then catching up.”

Structurally, the statocyst “is analogous to our auditory system,” said Mooney, who began his hearing research while working on his Ph.D. at the University of Hawaii. The statocyst, he thinks, “is on its way to becoming an ear” like the more familiar ears of vertebrates.

But to what extent does it function as an ear? “One of the obvious questions is, ‘Can this acceleration-sensing ‘ear’ to also detect sounds?’ Then, if they can hear sounds ‘Do squid hear their predators coming?’ ” Mooney asked.

To find out if squid have true, functioning “ears,” Mooney tests whether the nerves coming from the statocysts send impulses in response to sound. He anesthetizes a squid and attaches an electrode just under the skin near the nerves that extend from the statocysts. He attaches another sensor into the squid’s back to get baseline measurements of electrical signals, because that part of the body should not respond to sounds.

He then lowers the squid into a shallow, 3-foot-wide tank. Also in the tank is a speaker that can emit a broad range of sound frequencies—pure tones repeated about 1,000 times for each frequency. He then records the 1,000 responses to each. Averaging those 1,000 responses reduces the natural, random electrical noise in the body yielding the electrical signals, in millivolts, that occur along the nerves after each tone. This hearing test method is similar to those used to checking hearing in human infants.

His preliminary findings indicate that nerve responses showed the squid “actually do hear,” he said. “But they only hear up to a certain frequency, about 500 Hz, which is pretty typical of a lot of fish that don’t hear very well.”  Humans hear from about 20-20,000 Hz. Squid also do not detect the very high frequency sounds of dolphin echolocation clicks.

That may help explain why squid are such a prolific food source: They may not always hear well enough to get out of the way of approaching predators. But when Mooney and his post-doc advisor  put the squid in a CT scanner, they found that squid may avoid predators in another way: they are almost the same density as water.  That is, when squid were scanned in water, the CT could not image the squid body, illustrating that squid are nearly transparent to sound. This would likely make them very difficult for echolocating predators to detect.  So, perhaps, squid could not take the evolutionary leap to adapt ears to detect very high frequencies, but being close in density to water is advantageous for several reasons, including avoiding predators.

Still, its auditory mechanisms have been good enough to make squid successful in an evolutionary sense. What, then, is the main purpose of the squid’s hearing system?

Mooney said his work falls under the heading of “sensory biology,” the study of how animals use their sensory systems to figure out the world around them. After the initial tests to see how sensitive squid are to sounds and their frequency range, he next studies will be to try to determine how important those abilities are to the animal. Do squid rely on sound to interact, migrate, communicate?

In one set of experiments Mooney will move the speakers to different positions and measure the nerves’ response to see if they sense the location of that speaker.

“It’s been suggested that a primary evolutionary drive behind hearing is to locate where the sound source is,” he said. “If your mother is calling to you, you have to know where your mother is. If there’s a predator coming you’d better darn well know where that predator is coming from so that you can get out of the way.”

Another question Mooney wants to pursue is how much—if at all, squid are affected by sounds of human origin in the ocean. Loud sounds, whether a sudden explosion or continuous ship traffic, might cause squid to migrate unnaturally just to escape the racket.

Mooney also thinks squid statocysts can tell scientists a lot about how ears originated and evolved.

“Humans, fish, and lots of animals use hair cells to detect sound and movement. Their hair cell structures are similar to squid, but also quite different,” said Mooney. “There is probably a basic structure which evolved millions of years ago, but vertebrates and invertebrates have taken quite different evolutionary paths since.

Paul Nachtigall, a biologist at the University of Hawaii who advised Mooney on his doctoral research on hearing and echolocation in whales and dolphins, said Mooney’s research on squid hearing mechanisms and the ecological uses of hearing in squid are “groundbreaking.”

“Aran was launched out of here with great success,” said Nachtigall, “and his rocket appears to have reached stage two prior to reaching a stellar orbit.”

Mooney’s work with squid is funded by The Grass Foundation and a WHOI Independent study award from the Andrew W. Mellon Fund for Innovative Research.