*In the year since Microsoft launched controller-free Kinect for Xbox 360, the device has taken on a life of its own. First Kinect became the fastest-selling consumer device in history and then it started showing up outside the living room in healthcare, education, and technology.*

It’s been a year since Kinect for Xbox 360 jumped onto the scene, bringing with it a new era of controller-free, interactive gaming and entertainment for the living room.

“It’s been an amazing 12 months – it’s been absolutely inspiring,” says Alex Kipman, general manager of incubation for Microsoft’s Interactive Entertainment Business. “When you have a great vision you expect it to do great things, but it’s humbling and inspiring to actually see it happen and exceed your expectations in terms of the ability – over a very short period of time – that you have affected the entire world.”

That effect – the Kinect Effect – began in its first 60 days on the market, when Microsoft sold a world-record 8 million devices. This made Kinect the fastest-selling consumer electronics device in history, according to Guinness World Records. 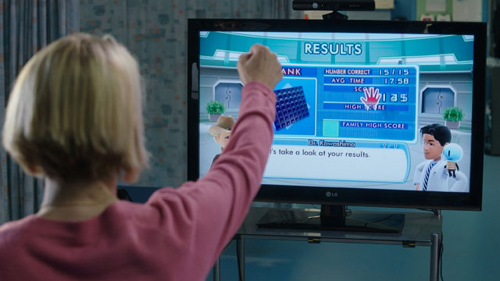 A patient at the Royal Berkshire Hospital in the U.K. uses Kinect as part of rehabilitation exercises. Patients at the hospital's Neurological Rehab Unit are matched to specific Kinect titles depending on the severity of their impairment. The games have helped improve patients’ balance, coordination and physical movement. Image credit: Microsoft

Even as Kinect was enjoying consumer success, the device was also taking on a life of its own outside the living room as everyone from scientists to tinkerers and educators to hobbyists started dreaming up and creating non-gaming applications for Kinect.

Jeremy Gibson, a game design instructor at the University of Southern California (USC), says a key reason Kinect has been able to move beyond the living room is because of how accessible the sophisticated technology is. For $149, people can buy a device that has 3D motion capture, facial and voice recognition, multi-array microphones, depth sensors and an RGB camera. In fact, Kinect packs such groundbreaking technological punch that Microsoft has filed nearly 600 patents to protect intellectual property related to the device. 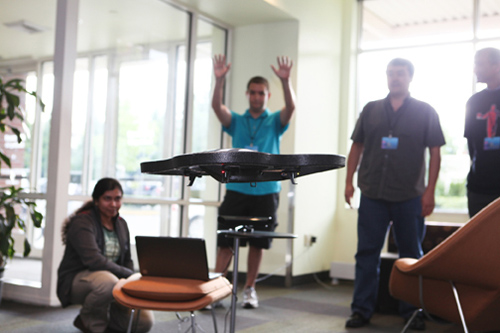 Indeed, since it was launched, Kinect has started popping up in a variety of places like healthcare, education, technology and industry. Kipman says more than 200 businesses, including 25 Fortune 500 companies, have joined a global pilot program to explore Kinect’s commercial possibilities. Toyota, Houghton Mifflin Harcourt, and Razorfish are among those that signed up.

“There is enthusiasm sweeping across a wide range of industries,” Kipman says.

Keen on encouraging the fast-growing wealth of non-gaming applications that have sprung up for Kinect, Microsoft released an academic and enthusiast software development kit for non-commercial projects in June and promised to develop a similar kit for commercial uses. To that end, today Microsoft announced that the Kinect for Windows commercial program will launch early next year, giving global businesses the tools they need to develop applications on Kinect that could take their businesses and industries in new directions. 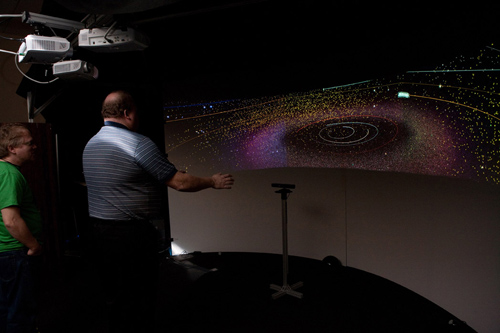 Microsoft Research's Jonathan Fay demonstrates exploring WorldWide Telescope with a wave of the hand after it was enabled using the Kinect for Windows SDK beta. April 13, 2011. Image credit: Microsoft

Thus, the genesis of the so-called “Kinect Effect” – a term coined in the hallways and conference rooms of Microsoft to describe the device’s increasingly widespread appeal and diversity of uses.

Making complicated technology disappear – this was essentially the vision for creating Kinect. That, and building on a platform that has taken millions and millions of years to create – the human body.

“We wanted to create technology that in a way understands us so we don’t have to understand it,” Kipman says. “That state-of-the-art technology combined with simple, fun, intuitive experiences is extremely powerful.”

Kinect removes the barrier of controllers, wands, gadgets or other gizmos or input devices, making the experience simply mano-a-technology. Kinect recognizes people. And with a wave of their hand or a voice command, it comes to life, bringing with it games, movies, TV, music, exercise, dancing and sports to their fingertips. 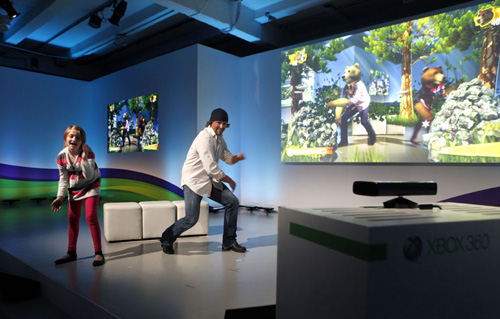 It’s this experience that inspired the U.K. tech news site T3.com to name Kinect both “Gadget of the Year” as well as “Gaming Gadget of the Year” – Kinect won in both categories, beating technology from companies like Sony, Apple, Nintendo and Amazon.

At USC, Gibson has Kinect in his classroom. He teaches game design and game prototyping in the School of Cinematic Arts Interactive Division, and says he and his colleagues are teaching students to develop for Xbox and for Kinect to give them hands-on experience with the new technology before they enter the real world.

“It broadens the horizons of our students and gives them the ability to come up with really interesting ideas they can create games out of,” Gibson says. “They’re learning game design, but really that’s just designing experiences for people – it’s not limited to games.”

This holiday season, more than 75 Kinect games will hit the market compared to the 17 released last year. This includes new Kinect games such as “Dance Central 2” and “Sesame Street: Once Upon a Monster” but also Kinect-enhanced Xbox games such as “Forza Motorsport 4.” 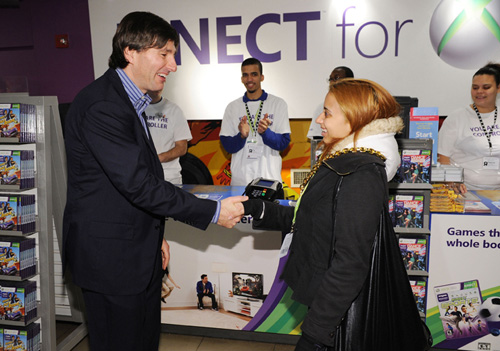 Don Mattrick, president of Interactive Entertainment Business at Microsoft, congratulates one of the people who waited in line to buy Kinect for Xbox 360 at midnight at the Toys "R" Us store in Times Square. New York City, Nov. 3, 2010. Image credit: Microsoft

Kinect has had an amazing first year, says Kevin Schofield, general manager of Microsoft Research, which played a key role in developing Kinect. “It’s amazing and fun and fascinating to watch the snowball effect of Kinect,” he says. “Kinect has taken something that was really hard to get and really expensive, and made it easy to get and inexpensive.”

Microsoft’s Interactive Entertainment Business – which is where Xbox lives – teamed up with Microsoft Research to develop Kinect, which uses years’ worth of technology from laboratories around the world. It was, and continues to be, an amazing partnership with Xbox, he says.

“It was fantastic, amazing, brilliant people on both sides that came together and really made this work,” Schofield says. “These things are always a partnership, and take a diverse set of skills, expertise, knowledge and experience.”

Kinect Outside the Living Room

What started as a gaming device in the living room has moved well beyond that space in a year. Engineers and enthusiasts alike are exploring a variety of uses for Kinect, Kipman says, including in the operating room.

Several inventors outside of Microsoft are using Kinect to develop applications for medical uses. One example is Tedesys, a technology startup in Cantebria, Spain, that is working on an application that will let doctors use the sensor while operating on patients, says Jesus Perez, the company’s chief operating officer. 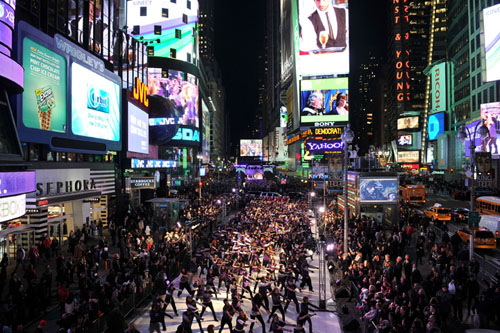 Surgeries often last for hours, and surgeons need to look up a patient’s medical information during the operation to do things like review an MRI or to call up details on the procedure they are doing. Normally, doctors have to leave the sterile operating room to use a non-sterile computer, and then scrub back in to continue the surgery. With Tedesys’ application, doctors will be able to use gesture or voice controls to examine the same information, hands-free, without leaving the room.

“Using Microsoft Kinect, they can check information on the patient without touching anything, and in this way they can avoid [the risk] of bacterial infection,” Perez says.

Daniel Calvo, Tedesys’s chief research officer, says building on Kinect’s software development kit has been an amazing experience. “We have studied Kinect,” he says, and are using it “in a radical way.”

According to Perez and Calvo, 6,000 people die every year in Spain as a result of bacterial infection from operating rooms.

Kipman says the healthcare applications of Kinect, “are near and dear to my heart,” whether it’s using Kinect in the operating room or to help stroke victims rehabilitate their motor skills.

Every day Microsoft hears about intriguing new applications of Kinect, either by seeing the Kinect applications people post on the Internet, or by hearing from people who contact Microsoft directly.

Kipman says some of the most touching correspondence comes from families with children with mental or physical disabilities who are able to use the controller-free Kinect and “have fun with their siblings for the first time ever.”

“We get emails telling us Kinect has fundamentally changed the way families interact – that it has profoundly changed lives,” he says. “That moves you.”

At USC, Gibson’s Kinect and Xbox 360 classes focus primarily on teaching video game design and storytelling, but he also sees Kinect’s potential outside the living room.

“For Microsoft, I think initially it was this idea to get into the fun, casual gaming market, but I think it’s become more than that,” Gibson says. “There’s this device out there now that’s being developed, and people are doing amazing things with it. I think it’s wonderful that Microsoft has brought this device to market and has the forethought and courage to see that it’s something super unique and is able to do something so much more than games and what other input devices are able to do.”

Schofield says Microsoft putting its products in the hands of developers is nothing new. In his 23 years at Microsoft, he has come to believe that it is one of the company’s greatest strengths.

“We’ve always been a company that’s been about trying to get new kinds of hardware and software out there and letting people play with them and take them in directions you’d never imagine,” Schofield says. “Kinect is a new kind of device, but I really think it follows in a long, consistent history of Microsoft trying to put things out there.”

In just a year on the market, Kinect has become a world-record setting consumer device, has transformed gaming, and has inspired widespread creativity and innovation well beyond the living room – and don’t expect that rapid pace to change, Kipman says. “That’s the speed at which this thing moves,” he says. “It’s something that should remain not incremental, but exponential.”

Kipman says Microsoft will continue to improve on the technology and the platform, and will also encourage Kinect experiences in gaming and across the board as all kinds of people and businesses “leverage the technology to create simpler, more intuitive experiences.”

Schofield says Kinect has inspired creativity inside the company. In Microsoft Research alone, several people are working on refining Kinect’s existing capabilities and enabling it to do more. For example, researchers are now looking to build a library of common Kinect gestures that Microsoft can share with developers to help their projects move more quickly.

“These things are just on a steady treadmill, they just keep getting better and better,” he says. “The underlying technology is just going to get better, and having the product out on the market accelerates the whole process.”

Kipman says if you look at any industry, the transformation from an old world to a new world doesn’t happen overnight. But when there is a vision, and people galvanize around it like they have with Kinect, it begins a journey that can change what is possible – and even what is probable.

“The Kinect Effect has allowed us to continue to shoot ever higher,” Kipman says.