Insects Scared to Death of Fish

The mere presence of a predator causes enough stress to kill a dragonfly, even when the predator cannot actually get at its prey to eat it, say biologists at the University of Toronto.

“How prey respond to the fear of being eaten is an important topic in ecology, and we’ve learned a great deal about how these responses affect predator and prey interactions,” says Professor Locke Rowe, chair of the Department of Ecology and Evolutionary Biology (EEB) and co-principal investigator of a study conducted at U of T’s Koffler Scientific Reserve.

“As we learn more about how animals respond to stressful conditions – whether it’s the presence of predators or stresses from other natural or human-caused disruptions – we increasingly find that stress brings a greater risk of death, presumably from things such as infections that normally wouldn’t kill them,” said Rowe. 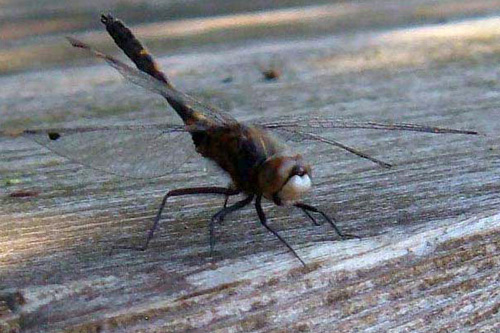 Shannon McCauley, a post-doctoral fellow, and EEB professors Marie-Josée Fortin and Rowe raised juvenile dragonfly larvae (Leucorrhinia intacta) in aquariums or tanks along with their predators. The two groups were separated so that while the dragonflies could see and smell their predators, the predators could not actually eat them.

“What we found was unexpected — more of the dragonflies died when predators shared their habitat,” said Rowe. Larvae exposed to predatory fish or aquatic insects had survival rates 2.5 to 4.3 times less than those not exposed.

In a second experiment, 11 per cent of larvae exposed to fish died as they attempted to metamorphose into their adult stage, compared to only two per cent of those growing in a fish-free environment. “We allowed the juvenile dragonflies to go through metamorphosis to become adult dragonflies and found those that had grown up around predators were more likely to fail to complete metamorphosis successfully, more often dying in the process,” added Rowe.

The scientists suggest that their findings could apply to all organisms facing any amount of stress, and that the experiment could be used as a model for future studies on the lethal effects of stress.

The research is described in a paper titled The deadly effects of ‘nonlethal’ predators, published in Ecology and highlighted in Nature this week. It was supported by grants to Fortin and Rowe from the Canada Research Chairs program and the Natural Sciences and Engineering Research Council of Canada and a post-doctoral fellowship awarded to McCauley.