Astronomers at Yale University have discovered what appear to be three fast-growing supermassive black holes in a relatively young, still-forming galaxy.

The discovery raises the possibility that this type of black hole continues to form billions of years after the Big Bang, challenging current theory. Astronomers previously thought all supermassive black holes emerged soon after the birth of the universe 13.7 billion years ago.

“As far as the host galaxy is concerned, these just popped into existence,” said Kevin Schawinski, a postdoctoral fellow at the Yale Center for Astronomy and Astrophysics and the lead author of a paper published online Dec. 1 in the journal Astrophysical Journal Letters. “They’re feeding on material about as fast as they can.”

Black holes are points in space where matter is packed so densely that light itself cannot escape. Standard black holes fall within a narrow mass range, and can exist anywhere within a galaxy. Supermassive black holes have far greater masses, which can vary widely, and they exist only at the centers of galaxies. Every galaxy is thought to have a supermassive black hole at its center, including ours, the Milky Way. 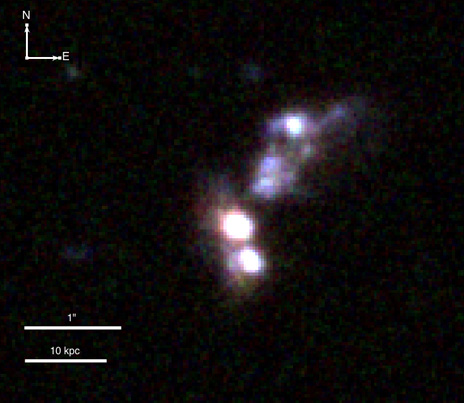 Yale University researchers have found what they believe to be three young supermassive black holes in a distant, still emerging galaxy. The discovery raises the possibility that this type of black hole continues to form billions of years after the Big Bang, challenging current theory. Image credit: Yale University

Astronomers believe that standard black holes form when the center of a giant star collapses inward. But the formation of supermassive black holes is largely a mystery, one the recent Yale discovery could help illuminate.

“We’re seeing a direct clue about where and when supermassive black holes can come into being,” Schawinski said.

Using observations and data collected through the Hubble Space Telescope, his research team identified the three suspected supermassive black holes in a distant, still-emerging galaxy where conditions, including abundant gas and young stars, are ripe for their formation. The galaxy exists at a point in space that is 4.8 billion years after the Big Bang — or, in Earth time, nearly nine billion years ago. (In far outer space, distance and time are essentially the same, so seeing into deep space is like looking back in time.) Relative to the galaxy, the three black holes are roughly 100 million years old, Schawinski said.

The astronomers’ discovery meanwhile raises questions about how supermassive black holes could form so long after the Big Bang, and whether this happens in many galaxies or was a freak occurrence.

“Kevin mined the Hubble archive to find this really stunning case where fragments of a galaxy appear to have collapsed into three rapidly growing black holes,” said co-author Meg Urry, director of the Yale Center for Astronomy and Astrophysics and chair of Yale’s physics department. “This offers an entirely new view of how supermassive black holes might grow within their host galaxies.”

Other authors of the paper are Ezequiel Treister of the Universidad de Concepcion in Chile; Brooke Simmons, Priyamvada Natarajan and Eilat Glikman, all of Yale.

Funding for the research was provided by NASA, the Guggenheim Foundation, and the Rockefeller Bellagio Center.