SAN FRANCISCO – An unusually hot melting season in 2010 accelerated ice loss in southern Greenland by 100 billion tons – and large portions of the island’s bedrock rose an additional quarter of an inch in response.

That’s the finding from a network of nearly 50 GPS stations planted along the Greenland coast to measure the bedrock’s natural response to the ever-diminishing weight of ice above it.

Every year as the Greenland Ice Sheet melts, the rocky coast rises, explained Michael Bevis, Ohio Eminent Scholar in Geodynamics and professor in the School of Earth Sciences at Ohio State University.  Some GPS stations around Greenland routinely detect uplift of 15 mm (0.59 inches) or more, year after year. But a temperature spike in 2010 lifted the bedrock a detectably higher amount over a short five-month period – as high as 20 mm (0.79 inches) in some locations.

In a presentation Friday at the American Geophysical Union meeting in San Francisco, Bevis described the study’s implications for climate change.

“Pulses of extra melting and uplift imply that we’ll experience pulses of extra sea level rise,” he said. “The process is not really a steady process.”

Because the solid earth is elastic, Bevis and his team can use the natural flexure of the Greenland bedrock to measure the weight of the ice sheet, just like the compression of a spring in a bathroom scale measures the weight of the person standing on it.

Bevis is the principal investigator for the Greenland GPS Network (GNET), and he’s confident that the anomalous 2010 uplift that GNET detected is due to anomalous ice loss during 2010: “Really, there is no other explanation. The uplift anomaly correlates with maps of the 2010 melting day anomaly. In locations where there were many extra days of melting in 2010, the uplift anomaly is highest.” 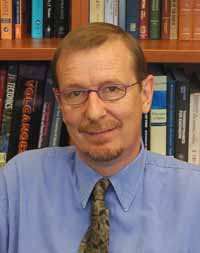 In scientific parlance, a melting day “anomaly” refers to the number of extra melting days – that is, days that were warm enough to melt ice – relative to the average number of melting days per year over several decades.

In 2010, the southern half of Greenland lost an extra 100 billion tons of ice under conditions that scientists would consider anomalously warm.

GNET measurements indicate that as that ice melted away, the bedrock beneath it rose. The amount of uplift differed from station to station, depending on how close the station was to regions where ice loss was greatest.

Southern Greenland stations that were very close to zones of heavy ice loss rose as much as 20 mm (about 0.79 inches) over the five months. Even stations that were located far away typically rose at least 5 mm (0.2 inches) during the course of the 2010 melting season. But stations in the North of Greenland barely moved at all.

From 2007 to 2009, GNET installed GPS stations in the bedrock that lay exposed around the ice sheet margins along the Greenland coast. The research team is using the earth’s natural elasticity of to “weigh” the ice. As previous Ohio State studies of Antarctica revealed, ice weighs down bedrock, and when the ice melts away, the bedrock rises measurably in response. 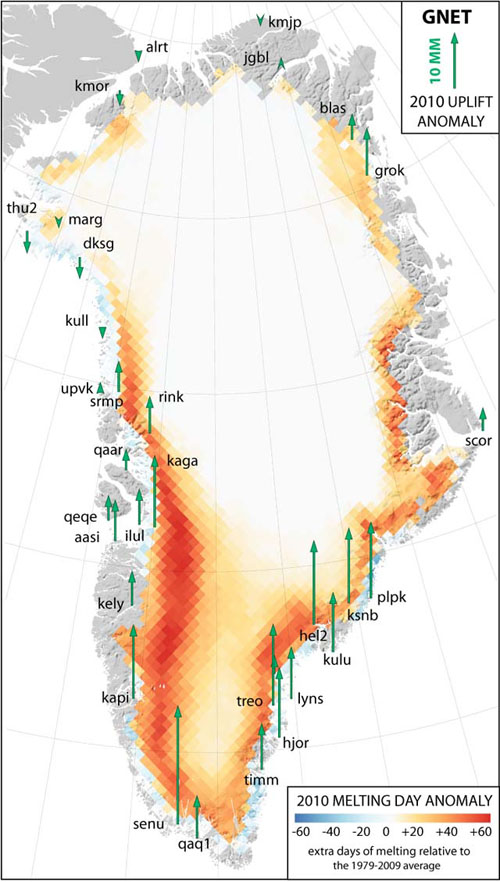 The 2010 Uplift Anomaly (green arrows), superimposed on a map showing the 2010 Melting Day Anomaly (shaded in red), which was produced by R. Simmon of the NASA Earth Observatory using data provided by M. Tedesco. Courtesy of Ohio State University.

GNET and similar GPS networks around the world could thus allow scientists to continue to measure ice loss after the Gravity Recovery and Climate Experiment (GRACE) satellites are retired in 2015. (GRACE is a joint project of NASA and the German Aerospace Center.)

Their colleagues include John M. Wahr of the University of Colorado, Boulder; Shfaqat Abbas Khan, Finn Bo Madsen, and Per Knudsen of the Danish Technical University in Copenhagen; Michael J Willis of Cornell University; Tonie M. van Dam and Olivier Francis of the University of Luxembourg; Bjorn Johns, Thomas Nylen, and Seth White of UNAVCO, Inc, in Boulder; Robin Abbott of CH2M HILL Polar Services, in Boulder; and Rene Forsberg of the Space Institute, Denmark.

GNET is funded by the National Science Foundation.