A team of scientists from Worcester Polytechnic Institute (WPI) and CellThera, a private company located in WPI’s Life Sciences and Bioengineering Center, have regenerated functional muscle tissue in mice, opening the door for a new clinical therapy to treat people who suffer major muscle trauma.

The team used a novel protocol to coax mature human muscle cells into a stem cell-like state and grew those reprogrammed cells on biopolymer microthreads. The threads were placed in a wound created by surgically removing a large section of leg muscle from a mouse. Over time, the threads and cells restored near-normal function to the muscle, as reported in the paper “Restoration of Skeletal Muscle Defects with Adult Human Cells Delivered on Fibrin Microthreads”, published in the current issue of the journal Tissue Engineering. Surprisingly, the microthreads, which were used simply as a scaffold to support the reprogrammed human cells, actually seemed to accelerate the regeneration process by recruiting progenitor mouse muscle cells, suggesting that they alone could become a therapeutic tool for treating major muscle trauma. 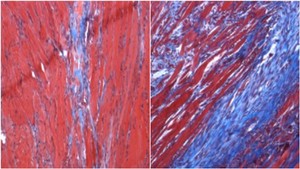 “We are pleased with the progress of this work, and frankly we were surprised by the level of muscle regeneration that was achieved,” said Raymond Page, assistant professor of biomedical engineering at WPI, chief scientific officer at CellThera, and corresponding author on the paper.

The current study is part of a multi-year program funded, in part, by grants from the National Institutes of Health and DARPA, the advanced research program of the U.S Department of Defense, to support the development of new technologies and therapies for people who suffer serious wounds and limb loss.

Mammalian skeletal muscles are able to repair small injuries caused by excessive exertion or minor trauma by recruiting muscle progenitor cells, which have not fully developed into muscle fibers, to the site of injury to rebuild the muscle. With major injuries, however, the body’s first priority is to stop the bleeding, so scar tissue forms quickly at the wound site and overrides any muscle repair. 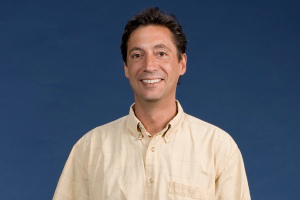 In the current study, the WPI/CellThera team combined two novel technologies to try to prevent scar formation and prompt muscle re-growth. The first was a method they had developed previously for reprogramming mature human skin cells without employing viruses or extra genes (Cloning, Stem Cells. 2009 Jul 21). The reprogrammed cells express stem cell genes and multiply in great numbers, but don’t differentiate into specific tissues. The second was the use of biopolymer microthreads as a scaffold to support the cells. Developed by George Pins, associate professor of biomedical engineering at WPI, the threads–about the thickness of a human hair–are made of fibrin, a protein that helps blood clot.

Researchers removed a portion of the tibialis anterior leg muscle in several mice (the muscle was chosen because injury to it affects the foot’s range of motion but doesn’t prevent the mice from walking). In some mice, the injuries were left to heal on their own. In others, the wound was filled with bundles of microthreads seeded with reprogrammed human muscle cells. The untreated mice developed significant scarring at the injury site, with no restoration of muscle function. In sharp contrast, the mice that received the reprogrammed cells grew new muscle fibers and developed very little scarring.

Tests done 10 weeks after implantation showed that the regenerated tibialis anterior muscle functioned with nearly as much strength as an uninjured muscle. The scientists expected that most of the regenerated muscle would be composed of human cells, since the implanted cells were from human muscle. Surprisingly, most of the new muscle fibers were made of mouse cells. The team theorized that the fibrin microthreads, which in their composition and shape are similar to muscle fibers, may encourage resident mouse progenitor cells to migrate into the wound and begin restoring the tissue (they may also forestall the natural inflammatory response that leads to scarring after a major injury).