Lived through period of species extinction

A species of ancient predator with saw-like teeth, sleek bodies and a voracious appetite for meat survived a major extinction at a time when the distant relatives of mammals ruled the earth.

A detailed description of a fossil that scientists identify as a varanopid “pelycosaur” is published in the December issue of Naturwissenschaften – The Science of Nature. Professors Sean Modesto from Cape Breton University, a U of T alumnus, and Robert Reisz from University of Toronto Mississauga provide evidence that a group of ancient, agile predators called varanopids survived for more than 35 million years and co-existed with more advanced animals.

“These animals were the most agile predators of their time, sleek-looking when compared to their contemporaries,” said Reisz, the paper’s senior author. “They seem to have survived a major change in the terrestrial fauna that occurred during the Middle Permian, a poorly understood extinction event in the history of life on land.” 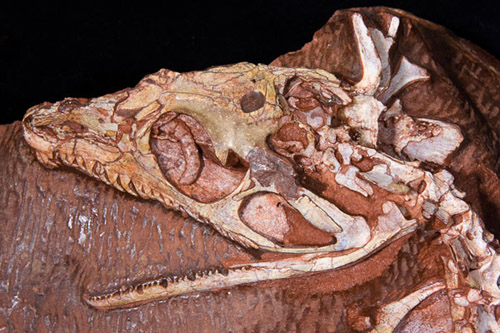 The pelycosaur survived a period of major extinction, potentially due to its dental and skeletal design. (UTM photo)

The Permian period, more than 260 million years ago, ended with this huge mass extinction during which most marine species and a majority of terrestrial species died out.

According to Modesto,the paper’s lead author, “these ancient animals really looked like modern goannas or monitor lizards, but are actually more closely related to mammals.”

Modesto and the team performed a detailed examination of the partial skull and jaw of the youngest known primitive mammal-like animal, which they believe lived in the Permian Period. The fossils are from rocks forming the Pristerognathus Assemblage Zone of the Beaufort Group in South Africa.

The fossil revealed teeth that are strongly flattened, curved towards the throat and with finely serrated cutting edges typical of hypercarnivores — animals with a diet that consists of more than 70 per cent meat.

Modesto and his colleagues concluded that these varanopids had a longer co-existence with animals that eventually evolved into mammals than previously believed. They suggest that the dental and skeletal design of varanopids, reminiscent of the Komodo dragon of today, may have contributed to their long survival and their success.