*Rats free trapped companions, even when given choice of chocolate instead*

The first evidence of empathy-driven helping behavior in rodents has been observed in laboratory rats that repeatedly free companions from a restraint, according to a new study by University of Chicago neuroscientists.

The observation, published today in Science, places the origin of pro-social helping behavior earlier in the evolutionary tree than previously thought. Though empathetic behavior has been observed anecdotally in non-human primates and other wild species, the concept had not previously been observed in rodents in a laboratory setting.

“This is the first evidence of helping behavior triggered by empathy in rats,” said Jean Decety, the Irving B. Harris Professor of Psychology and Psychiatry. “There are a lot of ideas in the literature showing that empathy is not unique to humans, and it has been well demonstrated in apes, but in rodents it was not very clear. We put together in one series of experiments evidence of helping behavior based on empathy in rodents, and that’s really the first time it’s been seen.”

The study demonstrates the deep evolutionary roots of empathy-driven behavior, said Jeffrey Mogil, the E.P. Taylor professor in pain studies at McGill University, who has studied emotional contagion of pain in mice. 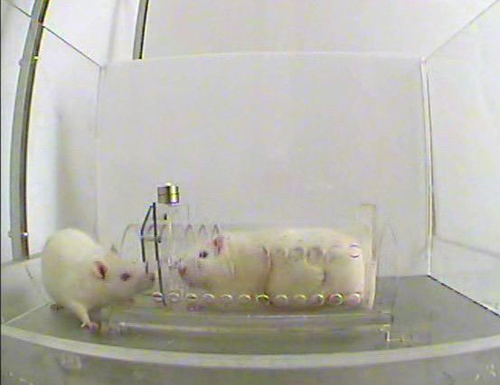 A laboratory rat tries to free its companion in an experiment that revealed rodents display empathic behavior. Photo by Inbal Ben-Ami Bartal

“On its face, this is more than empathy, this is pro-social behavior,” said Mogil, who was not involved in the study. “It’s more than has been shown before by a long shot, and that’s very impressive, especially since there’s no advanced technology here.”

The experiments, designed by psychology graduate student and first author Inbal Ben-Ami Bartal with co-authors Decety and Peggy Mason, placed two rats that normally share a cage into a special test arena. One rat was held in a restrainer device — a closed tube with a door that can be nudged open from the outside. The second rat roamed free in the cage around the restrainer, able to see and hear the trapped cagemate but not required to take action.

The researchers observed that the free rat acted more agitated when its cagemate was restrained, compared to its activity when the rat was placed in a cage with an empty restrainer. This response offered evidence of an “emotional contagion,” a frequently observed phenomenon in humans and animals in which a subject shares in the fear, distress or even pain suffered by another subject. 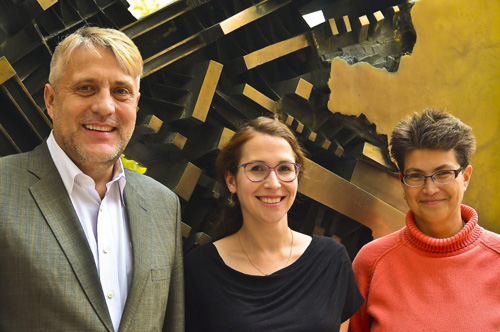 The three researchers who worked with the laboratory rats in the empathy study are, left to right, Jean Decety, the Irving B. Harris Professor in Psychology and Psychiatry, Inbal Ben-Ami Bartal, a graduate student in psychology and the lead study author, and Peggy Mason, Professor in Neurobiology. Photo by Megan Doherty

While emotional contagion is the simplest form of empathy, the rats’ subsequent actions clearly comprised active helping behavior, a far more complex expression of empathy. After several daily restraint sessions, the free rat learned how to open the restrainer door and free its cagemate. Though slow to act at first, once the rat discovered the ability to free its companion, it would take action almost immediately upon placement in the test arena.

“We are not training these rats in any way,” Bartal said. “These rats are learning because they are motivated by something internal. We’re not showing them how to open the door, they don’t get any previous exposure on opening the door, and it’s hard to open the door. But they keep trying and trying, and it eventually works.”

To control for motivations other than empathy that would lead the rat to free its companion, the researchers conducted further experiments. When a stuffed toy rat was placed in the restrainer, the free rat did not open the door. When opening the restrainer door released his companion into a separate compartment, the free rat continued to nudge open the door, ruling out the reward of social interaction as motivation. The experiments left behavior motivated by empathy as the simplest explanation for the rats’ behavior.

“There was no other reason to take this action, except to terminate the distress of the trapped rats,” Bartal said. “In the rat model world, seeing the same behavior repeated over and over basically means that this action is rewarding to the rat.”

As a test of the power of this reward, another experiment was designed to give the free rats a choice: free their companion or feast on chocolate. Two restrainers were placed in the cage with the rat, one containing the cagemate, another containing a pile of chocolate chips. Though the free rat had the option of eating all the chocolate before freeing its companion, the rat was equally likely to open the restrainer containing the cagemate before opening the chocolate container.

“That was very compelling,” said Mason, Professor in Neurobiology. “It said to us that essentially helping their cagemate is on a par with chocolate. He can hog the entire chocolate stash if he wanted to, and he does not. We were shocked.”

Now that this model of empathic behavior has been established, the researchers are carrying out additional experiments. Because not every rat learned to open the door and free its companion, studies can compare these individuals to look for the biological source of these behavioral differences. Early results suggested that females were more likely to become door openers than males, perhaps reflecting the important role of empathy in motherhood and providing another avenue for study.

“This model of empathy and helping behavior opens the path for elucidating aspects of the underlying neurophysiological mechanisms that were not accessible until now.” Bartal said.

The experiments also provide further evidence that empathy-driven helping behavior is not unique to humans – and suggest that Homo sapiens could learn a lesson from its rat cousins.

The paper, “Empathy and pro-social behavior in rats,” will be published Dec. 9 by the journal Science. Funding for the study was provided by the National Institute on Drug Abuse and the National Science Foundation.

*Source: The University of Chicago (Published on December 8, 2011)