These new observations may help researchers better understand and predict iceberg production from glaciers and ice sheets, improving estimates of sea-level rise due to climate change.

“If we want to have accurate predictions of sea-level rise, we need to understand how to model iceberg calving,” says Fabian Walter, a glaciologist at the Scripps Institution of Oceanography, in La Jolla, Calif. Walter is lead author of the study, which has been accepted for publication in Geophysical Research Letters, a journal of the American Geophysical Union (AGU).

“Calving” is the term for icebergs breaking off from glaciers. 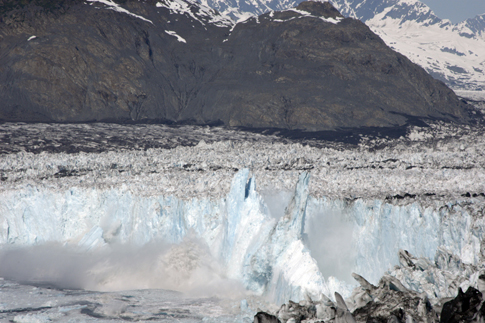 About the image above: Columbia Glacier Calving. Dramatic submarine iceberg calving from the grounded terminus of Columbia Glacier, 17 June, 2005. The height of the ice cliff is approx. 70 meters.Image credit:Photographer: Shad O’Neel, USGS.

This study presents the first detailed observation of a glacier undergoing a transition from grounded (resting on the ocean floor) to floating, as is currently happening to a section of Columbia Glacier, one of Alaska’s many tidewater glaciers. Tidewater glaciers flow directly into the ocean, ending at a cliff in the sea, where icebergs are formed. Prior to this study, Alaskan tidewater glaciers were believed to be exclusively grounded and unable to float without disintegrating.

Icebergs are a leading source of water for the global ocean basin. Despite this, iceberg calving is one of the least understood processes involved in ice mass loss and the corresponding sea-level rise. This study is part of a larger effort to understand the formation of icebergs from glaciers and to include that process in large-scale glacier models.

“We’re seeing more tidewater glaciers retreat,” says Walter. “As they retreat, they thin, and that increases the likelihood that they’ll come afloat.” 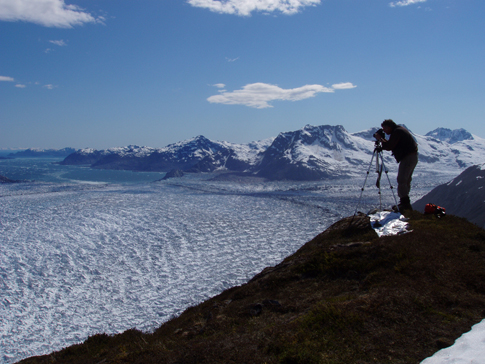 The research team conducted their study on Columbia Glacier by installing a seismometer—a sensor that measures seismic waves that are produced by shifts in geologic formations, including earthquakes, landslides, and the calving of icebergs. The scientists studied the seismometer readings from 2004–2005 and 2008–2009, which allowed them to compare size and frequency of icebergs calved by a glacier before and after it became floating.

Calving occurs when fractures in the ice join up and cause a piece of ice to completely separate from the main glacier to form an iceberg. Unlike the floating glaciers, grounded glaciers calve icebergs nearly continuously, which means they generally form smaller icebergs.

The speed at which the Columbia Glacier is receding may also have contributed to a section of its ice coming afloat, says glaciologist Shad O’Neel of the U.S. Geological Survey (USGS), in Anchorage, Alaska, who coauthored the paper. Columbia is one of the fastest-receding glaciers in the world, having retreated 4 kilometers (2.49 miles) since 2004, and nearly 20 km (12.43 mi) since 1980.

This research was funded by a grant from the National Science Foundation. Scripps Institution of Oceanography is a graduate school of the University of California at San Diego.