AMHERST, Mass. – Molecular chaperones have emerged as exciting new potential drug targets, because scientists want to learn how to stop cancer cells, for example, from using chaperones to enable their uncontrolled growth. Now a team of biochemists at the University of Massachusetts Amherst led by Lila Gierasch have deciphered key steps in the mechanism of the Hsp70 molecular machine by “trapping” this chaperone in action, providing a dynamic snapshot of its mechanism.

She and colleagues describe this work in the current issue of Cell. Gierasch’s research on Hsp70 chaperones is supported by a long-running grant to her lab from NIH’s National Institute for General Medical Sciences. 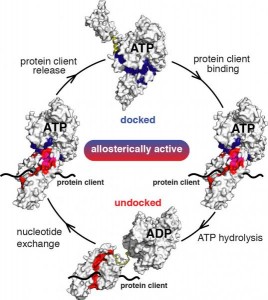 The Hsp70 mechanism of action illustrating how the chaperone cycles between tight and loose binding states and so binds and releases its protein client. The new work from Zhuravleva, Clerico and Gierasch enabled the key intermediate allosterically active state to be described in molecular detail, shedding light on previously mysterious aspects of Hsp70 function. Image curtesy of UMass Amherst (Click image for larger view)

Molecular chaperones like the Hsp70s facilitate the origami-like folding of proteins, made in the cell’s nanofactories or ribosomes, from where they emerge unstructured like noodles. Proteins only function when folded into their proper structures, but the process is so difficult under cellular conditions that molecular chaperone helpers are needed.

The newly discovered information about chaperone action is important because all rapidly dividing cells use a lot of Hsp70, Gierasch points out. “The saying is that cancer cells are addicted to Hsp70 because they rely on this chaperone for explosive new cell growth. Cancer shifts our body’s production of Hsp70 into high gear. If we can figure out a way to take that away from cancer cells, maybe we can stop the out-of-control tumor growth. To find a molecular way to inhibit Hsp70, you’ve got to know how it works and what it needs to function, so you can identify its vulnerabilities.”

Chaperone proteins in cells, from bacteria to humans, act like midwives or bodyguards, protecting newborn proteins from misfolding and existing proteins against loss of structure caused by stress such as heat or a fever. In fact, the heat shock protein (Hsp) group includes a variety of chaperones active in both these situations.

As Gierasch explains, “New proteins emerge into a challenging environment. It’s very crowded in the cell and it would be easy for them to get their sticky amino acid chains tangled and clumped together. Chaperones bind to them and help to avoid this aggregation, which is implicated in many pathologies such as neurodegenerative diseases. This role of chaperones has also heightened interest in using them therapeutically.”

However, chaperones must not bind too tightly or a protein can’t move on to do its job. To avoid this, chaperones rapidly cycle between tight and loose binding states, determined by whether ATP or ADP is bound. In the loose state, a protein client is free to fold or to be picked up by another chaperone that will help it fold to do its cellular work. In effect, Gierasch says, Hsp70s create a “holding pattern” to keep the protein substrate viable and ready for use, but also protected.

She and colleagues knew the Hsp70’s structure in both tight and loose binding affinity states, but not what happened between, which is essential to understanding the mechanism of chaperone action. Using the analogy of a high jump, they had a snapshot of the takeoff and landing, but not the top of the jump. “Knowing the end points doesn’t tell us how it works. There is a shape change in there that we wanted to see,” Gierasch says.

To address this, she and postdoctoral fellows Anastasia Zhuravleva and Eugenia Clerico obtained “fingerprints” of the structure of Hsp70 in different states by using state-of-the-art nuclear magnetic resonance (NMR) methods that allowed them to map how chemical environments of individual amino acids of the protein change in different sample conditions. Working with an Hsp70 known as DnaK from E. coli bacteria, Zhuravleva and Clerico assigned its NMR spectra. In other words, they determined which peaks came from which amino acids in this large molecule.

The UMass Amherst team then mutated the Hsp70 so that cycling between tight and loose binding states stopped. As Gierasch explains, “Anastasia and Eugenia were able to stop the cycle part-way through the high jump, so to speak, and obtain the molecular fingerprint of a transient intermediate.” She calls this accomplishment “brilliant.”

Now that the researchers have a picture of this critical allosteric state, that is, one in which events at one site control events in another, Gierasch says many insights emerge. For example, it appears nature uses this energetically tense state to “tune” alternate versions of Hsp70 to perform different cellular functions. “Tuning means there may be evolutionary changes that let the chaperone work with its partners optimally,” she notes.

“And if you want to make a drug that controls the amount of Hsp70 available to a cell, our work points the way toward figuring out how to tickle the molecule so you can control its shape and its ability to bind to its client. We’re not done, but we made a big leap,” Gierasch adds. “We now have an idea of what the Hsp70 structure is when it is doing its job, which is extraordinarily important.”