Cell-penetrating peptides, such as the HIV TAT peptide, are able to enter cells using a number of mechanisms, from direct entry to endocytosis, a process by which cells internalize molecules by engulfing them.

Further, these cell-penetrating peptides, or CPPs, can facilitate the cellular transfer of various molecular cargoes, from small chemical molecules to nano-sized particles and large fragments of DNA. Because of this ability, CPPs hold great potential as in vitro and in vivo delivery vehicles for use in research and for the targeted delivery of therapeutics to individual cells.

But exactly how cell-penetrating peptides — and particularly the HIV TAT peptide — accomplish these tasks has so far been a mystery.

“The HIV TAT peptide is special. People discovered that one can attach almost anything to this peptide and it could drag it across the cell,” said Gerard Wong, a professor of bioengineering and of chemistry and biochemistry at the UCLA Henry Samueli School of Engineering and Applied Science and the California NanoSystems Institute at UCLA. “So there are obvious beneficial drug-delivery and biotechnology applications.” 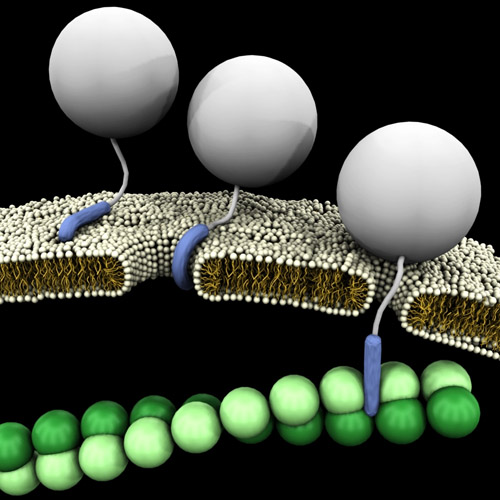 In a new study published in Proceedings of the National Academy of Science, UCLA Engineering researchers, including Wong and bioengineering professors Timothy Deming and Daniel Kamei, identify how HIV TAT peptides can have multiple interactions with the cell membrane, the actin cytoskeleton and specific cell-surface receptors to produce multiple pathways of translocation under different conditions.

Moreover, because the researchers now understand how cell-penetrating peptides work, they say it is possible to formulate a general recipe for reprograming normal peptides into CPPs.

“Prior to this, people didn’t really know how it all worked, but we found that the HIV TAT peptide is really kind of like a Swiss Army Knife molecule, in that it can interact very strongly with membranes, as well as with the cytoskeletons of cells,” said Wong, the study’s lead author. “The second part wasn’t well appreciated by the field.”

In addition to the membrane activity, researchers discovered that the HIV TAT peptide also creates its own binding site out of the membrane. This means the peptide can actually go through the membrane and induce the cytoskeleton directly to have an endocytotic event.

“We found that there are two channels of activity,” Wong said. “Because of the peculiar sequence of HIV TAT, it’s very good at being able to interact with membranes. Further, with the high-density packing of charged amino acids in the peptide, it can also interact very strongly with the cell’s cytoskeleton, as well as its receptors.”

In addition, the researchers noticed that small cargoes can be transferred directly, while cargoes larger than a few nanometers needed to be anchored to the membrane by the TAT peptide.

Deming, who specializes in synthetic methods, prepared the polypeptide samples for use in the experiments. Kamei, an expert in cellular trafficking, performed cell-based endocytosis experiments using inhibitor drugs and confocal microscopy to identify dominant mechanisms of endocytosis.

“This research is exciting because cell-penetrating peptides have been used in the area of drug delivery for some time,” Kamei said. “Gaining any additional understanding of these delivery agents will help in future drug-carrier designs.”

It is the group’s hope that the new understanding gained from their study will be used to engineer new molecules that are more effective in delivering therapeutic agents.

“This collaboration was important because it combined expertise in the areas of synthesis, characterization and cellular trafficking to address a very relevant problem,” Kamei said. “I definitely see more opportunity for combining these areas to tackle other problems in the growing field of biomaterials.”