*Brian P. Schmidt, who graduated from the UA in 1989 with a double major in astronomy and physics, shares this year’s Nobel Prize in Physics with two colleagues for a discovery that has rocked our understanding of the cosmos: The universe is expanding at an ever-faster pace.*

In the last years of the 20th century, two teams of researchers set out to race each other to measure the rate of the universe’s expansion, and by extension, unveil how the universe most likely will end.

University of Arizona alumnus Brian P. Schmidt, now a professor of astronomy at Australian National University who headed one of the teams, shares the 2011 Nobel Prize in Physics with Saul Perlmutter from the University of California, Berkeley, and Adam G. Riess from Johns Hopkins University and Space Telescope Science Institute in Baltimore.

Their quest has its origin in the 1920s, when scientists measured the relative brightness of stars and used this to calculate the distances to galaxies. They discovered that the universe is not static as was thought, but is expanding. It was this discovery that led to the theory of the Big Bang, which states that our universe was born from the debris of a cosmic explosion. 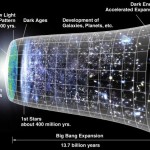 Ever since the Big Bang, the universe has expanded, pulling everything in it further and further apart. The 2011 Nobel Prize in Physics honors the discovery that the cosmic expansion is accelerating, not slowing down as previously expected. (Illustration: NASA WMAP)

The teams used a special type of supernova, or exploding star, as a cosmic yardstick to precisely measure cosmic distances and determine the speed with which stars and galaxies are moving away from each other. Brighter than ordinary stars, supernovae are visible from much greater distances, allowing scientists to probe the depths of space.

“The idea behind using those special types of supernovae is that we know their actual brightness,” explained Dennis Zaritsky, a professor of astronomy at the UA’s Steward Observatory who studies the structures of galaxies and dark matter, an elusive type of matter postulated to exist throughout the universe that is hard to detect and study.

“By comparing their intrinsic brightness to how bright they appear to us, we can measure their distance.”

But exploding stars are rare, short-lived events. The scientists had to find each supernova, determine if it was the right type and then request observation time at telescopes – a procedure that normally would take months – all in just a few weeks before the supernova went dim.

Both teams expected to find that the expansion of the universe was slowing down, keeping with the theory that the expansion of space kicked off in the Big Bang would eventually slow to a halt and reverse when the force of gravity pulled the stars and galaxies back together in a cosmic Big Crunch.

Instead, the scientists were shocked when they independently discovered the contrary: Many supernovae were fainter than predicted, indicating that the rate at which stars and galaxies move away from each other is increasing. 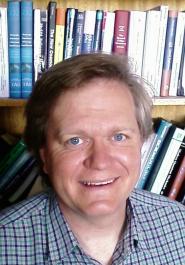 The finding seems to indicate that the universe will end not in a cataclysmic reverse of the Big Bang, but in icy isolation as the galaxies move so far apart that their light will never reach each other.

“The possibility that the universe appears to be accelerating was something no one was really thinking about,” said Steward Observatory Director Peter Strittmatter. “The question was always, ‘Is there enough matter in the cosmos to slow this expansion down?'”

“The discovery revolutionized our thinking in cosmology and caused a stir in understanding of the nature of particle physics as well,” he added.

“It started a whole new era of physics that is very exciting and set the stage for what we are doing now,” Zaritsky added.

Astronomers at the UA are heavily involved in two projects aimed at better understanding the structure of the universe. The Sloan Digital Sky Survey uses baryonic oscillations, basically sound waves propagating through space, to map the cosmos, while the Large Synoptic Survey Telescope or LSST, currently being built in Chile, will measure and map a tremendous amount of supernovae.

The independent discovery by two competing teams has shaped our understanding of the cosmos and unveiled a universe that is 95 percent unknown: Something must be pushing the stars apart, something strong enough to overcome gravity.

“Brian was one of our most talented students at the time, but of course it’s a long road from being an astronomy major to winning the Nobel Prize,” Strittmatter said.

He added that he was pleased to see that this Nobel Prize goes out to scientists who are a bit younger than the typical Nobel Laureate.

Strittmatter also noted that the institutions Schmidt has been affiliated with – Australian National University, Harvard University and the UA – are all partners in the Giant Magellan Telescope Project. The UA’s Steward Observatory’s Mirror Lab has been selected to produce the seven 8.4-meter mirrors that will be combined to make the first of the new generation of extremely large telescopes in the world.

“Brian is an extremely nice guy,” Zaritsky said, “very down to Earth. In addition to being a highly accomplished scientist, he is someone with highly diverse interests, including wine. He even grows his own on his property down under.”

– By Daniel Stolte and Shelley Littin