UCLA physicists have made nanomechanical measurements of unprecedented resolution on protein molecules.

The new measurements, by UCLA physics professor Giovanni Zocchi and former UCLA physics graduate student Yong Wang, are approximately 100 times higher in resolution than previous mechanical measurements, a nanotechnology feat which reveals an isolated protein molecule, surprisingly, is neither a solid nor a liquid.

“Proteins are the molecular machines of life, the molecules we are made of,” Zocchi said. “We have found that sometimes they behave as a solid and sometimes as a liquid. 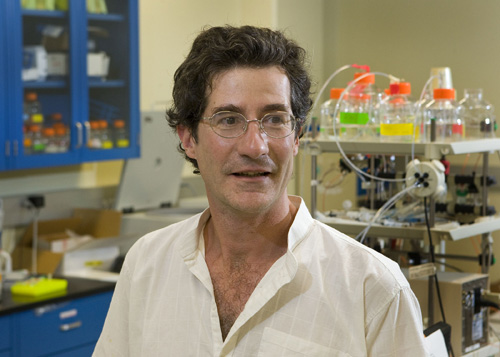 Zocchi and Wang’s new nanotechnology method allowed them to apply stresses and probe the mechanics of the protein without destroying it. Wang, now a physics postdoctoral fellow at the University of Illinois in Urbana–Champaign, and Zocchi discovered a “transition to a viscoelastic regime in the mechanical response” of the protein.

The measurements were performed on the enzyme guanylate kinase, or GK, a member of an essential class of enzymes called kinases. Specifically, GK transfers a phosphate group from ATP (the universal “fuel” of the cell) to GMP, producing GDP, an essential metabolic component, Zocchi said.

The study on the characterization of the “visco-elastic transition” is reported this month in the online journal PLoS ONE, a publication of the Public Library of Science. The research was federally funded by the National Science Foundation’s division of materials research and by a grant from the University of California Lab Research Program.

Zocchi and Wang published related findings earlier this year in the journal Europhysics Letters, a publication of the European Physical Society, and the journal Physical Review Letters.

In previous research, Zocchi and colleagues reported a significant step in controlling chemical reactions mechanically last year, made a significant step toward a new approach to protein engineering in 2006, created a mechanism at the nanoscale to externally control the function and action of a protein in 2005, and created a first-of-its-kind nanoscale sensor using a single molecule less than 20 nanometers long in 2003. A nanometer is roughly 2,000 times smaller than the width of a human hair.