Dmitri Talapin, associate professor in chemistry, was one of 10 young scientists from around the world who delivered a message that “Scientific Research is a Global Necessity” to political, scientific and business leaders participating in the 2011 Science and Technology in Society forum last October in Kyoto, Japan.

The Japan Society for the Promotion of Science and the New York Academy of Sciences selected Talapin to represent the young scientists of North America at the STS Forum, which meets at the same venue were the Kyoto Protocol to alleviate global warming was signed in 1997. 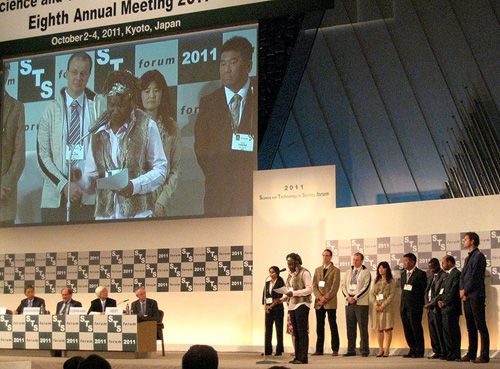 Dmitri Talapin, associate professor in chemistry at the University of Chicago, took the stage with a delegation of young scientists from around the world at the Science and Technology in Society forum in Kyoto, Japan, last October. Talapin is pictured on the video screen standing to the left of the speaker. He and his colleagues delivered a message to world leaders stressing the global importance of scientific research. Image courtesy of Dmitri Talapin

Discussions at this year’s forum highlighted energy and environment and nuclear safety and future development, but also encompassed issues such as food and population, health, and sustainability.

The message that Talapin and his scientific peers from Japan, Nigeria, Bangladesh, Singapore, Burundi, Germany and The Netherlands delivered at the forum asked world leaders to undertake four endeavors:

This should include free access to scientific information, the young scientists said, possibly by using new web-based and peer-reviewed publishing. Further, they advocated the use of social media along with more traditional communication channels to openly discuss and critically evaluate mass-media reports.

Talapin and his associates linked this topic to fostering the development of innovative technologies, including the reverse-osmosis membrane to help solve the water shortage in megacities. Multiple political management issues would need to be addressed, they maintained, to bring about improvements in global health and in alleviating food shortages and population increases, especially in the developing world.

This action would include collectively increasing the representation of women and other under-represented groups in scientific research, education and decision-making. A more diverse community of scientists will create better results and make better global decisions that affect everyone, the young scientists said.