EAST LANSING, Mich. — The same principle that causes figure skaters to spin faster as they draw their arms into their bodies has now been used by Michigan State University researchers to understand how molecules move energy around following the absorption of light.

Conservation of angular momentum is a fundamental property of nature, one that astronomers use to detect the presence of satellites circling distant planets. In 1927, it was proposed that this principle should apply to chemical reactions, but a clear demonstration has never been achieved.

In the current issue of Science, MSU chemist Jim McCusker demonstrates for the first time the effect is real and also suggests how scientists could use it to control and predict chemical reaction pathways in general.

“The idea has floated around for decades and has been implicitly invoked in a variety of contexts, but no one had ever come up with a chemical system that could demonstrate whether or not the underlying concept was valid,” McCusker said. “Our result not only validates the idea, but it really allows us to start thinking about chemical reactions from an entirely different perspective.” 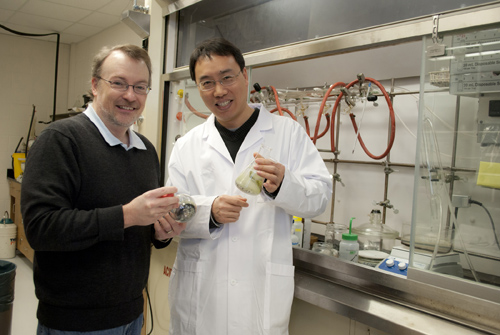 The experiment involved the preparation of two closely related molecules that were specifically designed to undergo a chemical reaction known as fluorescence resonance energy transfer, or FRET. Upon absorption of light, the system is predisposed to transfer that energy from one part of the molecule to another.

McCusker’s team changed the identity of one of the atoms in the molecule from chromium to cobalt. This altered the molecule’s properties and shut down the reaction. The absence of any detectable energy transfer in the cobalt-containing compound confirmed the hypothesis.

“What we have successfully conducted is a proof-of-principle experiment,” McCusker said. “One can easily imagine employing these ideas to other chemical processes, and we’re actually exploring some of these avenues in my group right now.”

The researchers believe their results could impact a variety of fields including molecular electronics, biology and energy science through the development of new types of chemical reactions.