UCLA researchers, in a finding that runs counter to conventional wisdom, have discovered for the first time that a gene thought to express a stress-response protein in all cells that come under stress instead expresses the protein only in specific cell types.

The research team, from the Jules Stein Eye Institute at UCLA and the UCLA Division of Pulmonary and Critical Care Medicine, focused on αB-Crystallin, one of a class of molecules known as heat shock proteins, which are involved in the folding and unfolding of other proteins, helping them recover from stress so they can do their job.

The expression of heat shock proteins is increased when cells are exposed to taxing environmental conditions, such as infection, inflammation, exercise, exposure to toxins and other stressors. 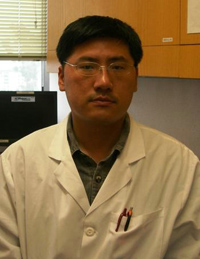 The heat shock protein αB-Crystallin may be associated with certain cancers and could be developed into a biomarker to monitor for diseases such as multiple sclerosis, age-related macular degeneration, heart-muscle degeneration and clouding of the eye lens. Any discoveries about how this protein is regulated and its molecular biology may reveal potential targets for novel therapies, said the study’s first author, Zhe Jing, a research associate in the UCLA Division of Pulmonary and Critical Care Medicine.

“If you use a certain cell type, this protein can be induced when the cells are stressed, but that doesn’t happen in a different cell type,” Jing said. “This novel finding does conflict with what has been thought — that this protein could be induced in any cell type.”

The findings of the two-year study are published in the current issue of the journal Cell Stress and Chaperones, a peer-reviewed journal for research on cell stress response.

However, in the most significant finding from this investigation, researchers discovered that in certain cell types, only one specific heat shock factor controls the expression of αB-Crystallin. For example, in the epithelial cell lines, it is heat shock factor 4 (HSF4), while a different heat shock factor, HSF1, plays this role in the fibroblast cells lines.

Jing’s findings strongly suggest that αB-Crystallin’s “preference” for certain heat shock factors in certain cells may be related to its role in various diseases.

“Considering the multiple roles of αB-Crystallin in so many diseases, the access of the HSF1 and HSF4 to the αB-Crystallin gene dictated by the certain cell type may be what is helping to cause certain diseases,” Jing said. “If we can uncover the cascade of events that result in disease, we may be able to come up with strategies to block or interrupt that cascade.”

Going forward, Jing and the research team will validate what they found in this study by examining single cells, which provides a greater challenge but may lead to further discoveries.

The research was funded by the National Institutes of Health.