Is the inaugural poem a new sub-genre of poetry? According to two practitioners of the form, the answer might be “yes.”

Poet Richard Blanco and Yale professor Elizabeth Alexander, two of only five poets in history to have created works for a presidential inauguration, came together on Feb. 5 for a poetry reading and dialogue about their unique shared experience. Blanco read his work “One Today” at President Barack Obama’s second inauguration, while Alexander read her “Praise Song for the Day” at Obama’s first. Their discussion was hosted by Ezra Stiles College master Stephen Pitti.

Before a packed audience of faculty, students, and New Haven residents, Blanco read three poems that he described as “ancestors” to his inaugural poem. Together, he said, the four poems represented his journey of “cultural negotiation” trying to find his identity as a son of working-class Cuban immigrants growing up in an idealized America. The first described his family’s slow embrace of the traditions associated with the American holiday they always knew as “San Giving.” The other two were about his mother and father, respectively: “Venus in Miami Beach” and “Building Bridges.” The latter referenced Blanco’s professional background as a civil engineer. He also read “One Today” — marking the first time he had read the work in public since the inauguration.

Blanco then shared his personal experience of writing “One Today” — from getting the news that he had been selected while he was driving (he pulled his car over to the side of the road and wept, he recalled) to delivering the poem before an estimated audience of a million people. He told his Yale audience that he felt less “exposed” in front of the crowd at the Washington Mall, whose faces he couldn’t see, than he did at the gathering of 120-plus people at Stiles.

When the President and Vice President stood up to greet him on his way to the podium, Blanco said, he felt an extra sense of welcome. After reading the poem, while Blanco was making his way to his seat, singer James Taylor tapped him on the shoulder and said, “Nice.” The poet recalled thinking to himself: “I can die now.”

Avowedly gay, Blanco confided that, at his partner’s insistence, he brought his mother to the inauguration. Taking his seat beside her after the reading, he whispered, “Well, Mom, it looks like we’re finally American.”

A deep respect for working people no matter what their station in life — a value handed down to him by his parents — gave Blanco a vantage point for writing a poem for a national event, he said, noting that he looked to nature for imagery to unite all Americans, literally and figuratively, under one sky. He also included elements from his own life — the references to his mother at a cash register, and his father cutting sugar cane — to give the poem a personal, intimate connection to the audience.

Repeatedly describing himself as an “emotional historian,” Blanco said he considers poetry a tribute to “those who come before us,” and, in his case, a voice for the generation of immigrants whose unique culture will soon be extinct. In fact, Blanco told those assembled, he brought a picture of his great-grandparents, whom he had never seen, with him to the inauguration platform. 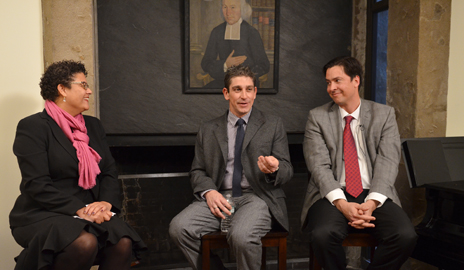 Professor Elizabeth Alexander and Richard Blanco (center) — two of only five poets to have read their works at a presidential inauguration — met at Yale for a discussion hosted by Stephen Pitti (right), master of Ezra Stiles College. (Photo by Michael Marsland)

The poet also talked more generally about his own creative process, informed to a certain extent by his natural bent for mathematics (“I was a math whiz,” he noted) and his training and professional experience as an engineer: “When I’m in pure creative mood, I have to go with that,” he said. The engineer comes in afterward, he noted, sometimes ruthlessly editing his own work. He also applies a visual standard to his work: Stanzas have to be the same number of lines, and have to take up the same amount of space on the page. At the end of a long balancing process, he said, “there’s sometimes more between the lines than in the lines.”

Blanco said he read the works of the four inaugural poets who preceded him, including Alexander, before embarking on his own, which he wrote on his kitchen table. When Alexander and Blanco talked about their shared experience, they agreed that a new paradigm was emerging for a poem to celebrate the diversity, history, landscape, and people of America on the occasion of a presidential inauguration.

Alexander asked Blanco what relation he thought “One Today” bore to his other poetry.

Having always explored America through the lens of his individual experience, he said, writing the inaugural poem gave him “an opportunity to explore America in another way I hadn’t seen.” Likening it to taking a snapshot of the whole country at a moment in time, he said he would welcome the opportunity to repeat the experience once every four years. He settled on the word “cousin” to describe the kinship relation between “One Today” and the poems that preceded it.

He described two experiences immediately after the inauguration that brought home to him the impact of his poem: A doorman recognizing him as he walked by reached out and grabbed his hand. “Give me some love,” he said to the poet. Another time, a woman he had never seen before rushed up to him on the street and hugged him without saying a word.