To Be A Scientist

*How Bob Vince changed the world*

Where does it begin, the act of becoming a scientist? Perhaps with a bowling ball, its finger holes packed with explosives, which when detonated, launch the ball into the air, cracking the otherwise pristine concrete walkway of your childhood home in four places, much to the consternation of your father. Or maybe with an explosion of homemade rocket fuel in your basement chemistry lab that scares your mother half to death. And all this before the troublesome teen years.

Bob Vince can’t be sure where his becoming a scientist began. But where it led changed the world. 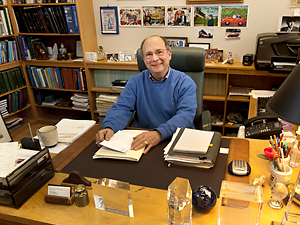 Bob Vince, shown here in his office, won an award at his 20th high school reunion for "most bald." "What can I say," he says. "Grass doesn't grow on a busy street." Photos: Patrick O'Leary

As the discoverer of carbovirs, the precursor to the AIDS drug Ziagen, Vince’s contribution to humanity can’t be overestimated. Though its history is one fraught with lessons and lawsuits, the drug’s legacy, in the end, is and will be one of human health and some mercy for millions afflicted with HIV/AIDS. Ziagen prevents HIV from altering the genetic material of healthy T-cells, which prevents the cells from producing new virus and decreases the amount of virus in the body. It’s a treatment that allows patients to live longer and with a better quality of life.

“It was the first drug for AIDS that was actually designed to be an AIDS drug,” says Vince. “When I tell people that, sometimes I think they don’t believe me.”

That’s because while it was the first drug discovered, it wasn’t the first on the market—that took more than a decade. Patent disputes and licensing lawsuits ultimately led to the creation of more than 100,000 pages of court documents, and consumed Vince’s life and research for years. He became depressed, he says, away from his work. This is a man whose hobby, outside of his chosen field of medicinal chemistry, is physics. For a man whose raison d’être is by all accounts science, life outside the lab took a toll on Vince.

Today, when asked how it feels to have created a drug that has helped to treat, improve, and prolong or save millions of lives, Vince seems almost as though he hasn’t considered it.

“Well, yeah. Right.” And immediately, Vince is on his feet, talking about anti-cancer compounds, anti-tumor agents, anti-aging, and early Alzheimer’s detection and treatment techniques—all things he and staff at the Center for Drug Design (CDD), where Vince is director, are working on. He sketches on his office blackboard strands of DNA and chemical formulas. And then he’s off on another subject, talking excitedly about endorphins. To illustrate, he suggests, “You know, when people run, they say, “Oh, my enkephalins. I feel euphoria….”

People who run, in fact, rarely say things like this. But it is a fact that people see the world through different lenses. Bob Vince sees the chemical formula that makes up the molecules that form the lenses.

Vince has received numerous awards and honors for his work. He’s one of few at the U recognized on the prestigious “Scholars Walk and Wall of Discovery” on the east bank of the TC campus. He is a Fellow of the American Association for the Advancement of Science. In 2010, he and one other U of M giant—alumnus, scientist, and Nobel laureate Norman Borlaug, who passed away in 2009—were together inducted into the Minnesota Inventors Hall of Fame. And he was just elected to the Minnesota Science and Technology Hall of Fame.

But among his most prized awards is a Western Union telegram from Senators Walter Mondale and Eugene McCarthy, postmarked October 1968, announcing a research grant of $16,000 from the National Cancer Institute. This he displays in his office.

Another—an offer letter from the U for a faculty position paying $12,000—Vince displays where his postdocs can see it. It is dated 1967. He was 26, and had already been a professor for two years in Mississippi. He says of it, breaking into a wide grin, “That was a good salary back then.” “They (the postdocs) think it’s pretty funny,” says Vince. Those same teasing students each year make Vince personalized cards and cakes for his birthday, images of which now line his office walls. And each year, he receives a box of chocolates from a former student who is now in her late 50s.

In 2002, revenues from Ziagen allowed for the creation of the U’s CDD, with a goal to make permanent the concept and intention of highly focused drug design and development. Vince directs the center and its more than 60 researchers, whose work varies from the just announced cyanide antidote (see sidebar), to ongoing research in areas like skin cancer prevention and treatment, antiviral agents, and Alzheimer’s drug therapy.

Revenues from Ziagen has so far brought the U about $500 million, providing positions for faculty and fellowships for graduate students and postdoctoral fellows, and for the ongoing work of the center and its scientists, current and becoming, who will, like Vince, make discoveries that will continue to improve the world, through the lens of science, for years to come.