*The hotter it gets, the smaller the animal?*

When Sifrhippus sandae, the earliest known horse, first appeared in the forests of North America more than 50 million years ago, it would not have been mistaken for a Clydesdale.

It weighed in at around 12 pounds–and it was destined to get much smaller over the ensuing millennia.

Sifrhippus lived during the Paleocene-Eocene Thermal Maximum (PETM), a 175,000-year interval of time some 56 million years ago in which average global temperatures rose by about 10 degrees Fahrenheit.

The change was caused by the release of vast amounts of carbon into the atmosphere and oceans.

About a third of mammal species responded with a significant reduction in size during the PETM, some by as much as one-half. 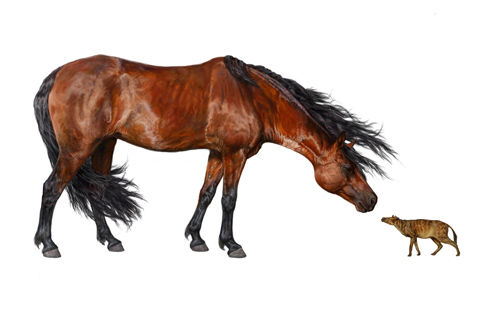 Scientists have assumed that rising temperatures or high concentrations of carbon dioxide primarily caused the “dwarfing” phenomenon in mammals during this period.

New research led by Ross Secord of the University of Nebraska-Lincoln and Jonathan Bloch of the Florida Museum of Natural History at the University of Florida offers evidence of the cause-and-effect relationship between temperature and body size.

Their findings also provide clues to what might happen to animals in the near future from global warming.

About the video: Earliest horses show that past global warming affected the body size of mammals. Credit: Jonathan Bloch and Stephen Chester, University of Florida

In a paper published in this week’s issue of the journal Science, Secord, Bloch and colleagues used measurements and geochemical composition of fossil mammal teeth to document a progressive decrease in Sifrhippus‘ body size that correlates very closely to temperature change over a 130,000-year span.

“It is little realized that with the increased warmth associated with the modern increased CO2 greenhouse effect, it is known that in deep time the concomitant reduction in available oxygen ~50 million years ago led to a reduction in body size of animal life,” says H. Richard Lane, program director in the National Science Foundation’s (NSF) Division of Earth Sciences, which funded the research. “What does that say about the future for Earth’s animals?” 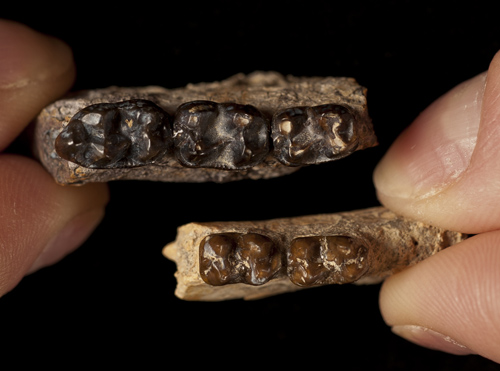 Teeth of Sifrhippus at its larger size with teeth from the same species after its size shrank. Image credit: Kristen Grace, UFL

Bloch said that multiple trails led to the discovery.

One was the fossils themselves, recovered from the Cabin Fork area of the southern Bighorn Basin near Worland, Wyo.

Stephen Chester at Yale, a paper co-author, had the task of measuring the horses’ teeth.

What he found when he plotted them through time caught Bloch and Secord by surprise.

“He pointed out that the first horses in the section were much larger than those later on,” Bloch says. “I thought something had to be wrong, but he was right and the pattern became more robust as we collected more fossils.”

Secord performed the geochemical analysis of the teeth. What he found was an even bigger surprise. 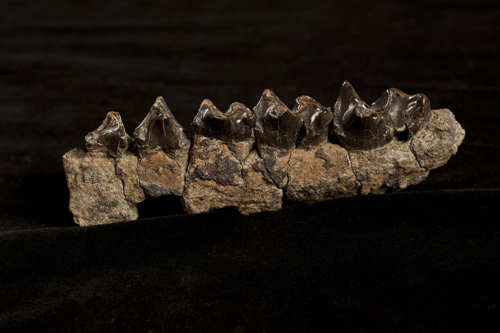 “It was absolutely startling when Ross pulled up the data,” Bloch said. “We realized that it was exactly the same pattern that we were seeing with the horse body.

“For the first time, going back into deep time–tens of millions of years–we were able to show that indeed temperature was causing essentially a one-to-one shift in body size in this lineage of horse.

“Because it’s over a long enough time, you can argue very strongly that what you’re looking at is natural selection and evolution that it’s actually corresponding to the shift in temperature and driving the evolution of these horses.”

Secord says that the finding raises important questions about how plants and animals will respond to rapid change in the not-too-distant future. 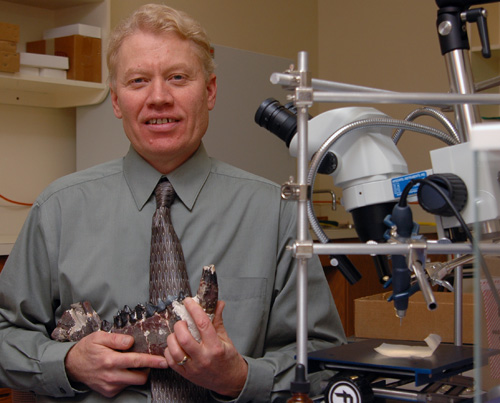 “This has implications for what we might expect to see over the next century or two with climate models that are predicting warming of as much as 4 degrees Centigrade over the next 100 years,” he says, which is 7 degrees Fahrenheit.

Those predictions are based largely on the 40 percent increase of atmospheric carbon dioxide levels, from 280 to 392 parts per million, since the start of the Industrial Revolution in the mid-19th century.

Ornithologists, Secord says, have already started to notice that there may be a decrease in body size among birds.

“One of the issues is that warming during the PETM happened much more slowly, over 10,000 to 20,000 years to increase by 10 degrees, whereas now we’re expecting it to happen over a century or two.”

“So there’s a big difference in scale. One of the questions is, ‘Are we going to see the same kind of response?’ Are animals going to be able to keep up and readjust their body sizes over the next couple of centuries?”

Increased temperatures are not the only change to which animals may have to adapt.

Experiments show that increased atmospheric carbon dioxide lowers the nutritional content of plants, which could have been a secondary driver of dwarfism during the PETM.

The research was also funded by University of Nebraska-Lincoln.