ANN ARBOR, Mich.— Pregnant female geladas show an unusually high rate of miscarriage the day after the dominant male in their group is replaced by a new male, a new University of Michigan study indicates.

The “Bruce effect” – in which pregnant females spontaneously miscarry after being exposed to an unfamiliar male – has been found repeatedly in laboratory rodents. However, no conclusive evidence for this effect had ever been demonstrated in a wild population prior to this study. Geladas are Old World monkeys that are close relatives of baboons.

The findings appear in the new issue of Science Express.

The U-M research examined five years of data collected from a wild population living in the Simien Mountains National Park in Ethiopia. 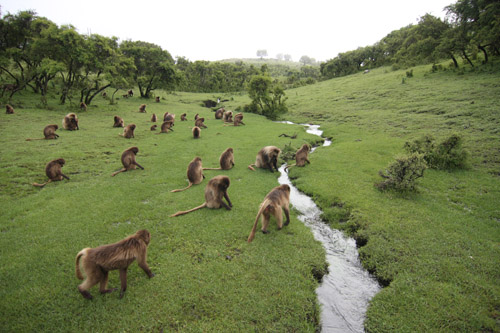 Geladas live in large groups, up to 1100 have been seen grazing together. Image credit: Clay Wilton

“The million-dollar question, of course, is how do these females miscarry? Are their bodies responding to a social cue? A chemical one? A combination of the two?” said Jacinta Beehner, an assistant professor in the departments of psychology and anthropology, and the lead author on the study.

Geladas live in family groups with one dominant male and up to a dozen related females. The dominant male gets to mate with his females as long as he remains dominant. However, there are many “bachelor” males that are just waiting for their chance to oust him. If a bachelor is successful, he gains reproductive access to all of the group’s females and often kills any dependent offspring sired by his predecessor. Predecessor males are allowed to stay on in the group as subordinates. 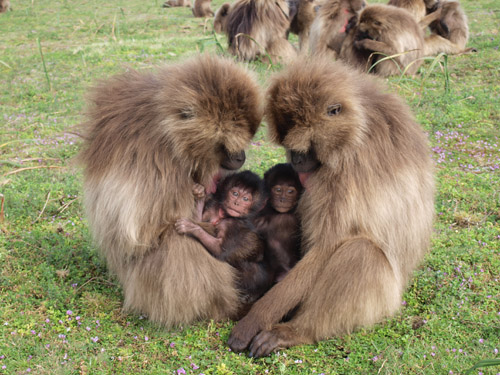 By killing infants, the new male hastens the return to fertility for these otherwise lactating females. Older juveniles that are already weaned are safe, since their mothers can mate with the new male.

“But the unweaned infants don’t stand a chance against an adult male – even with their mother’s protection,” Beehner said.

So what is a female to do about this? Clearly, this represents an enormous reproductive loss for her, she said. Although somewhat counterintuitive, the leading adaptive hypothesis behind the Bruce effect is that it evolved as a “loss-cutting” strategy for pregnant females when new males arrive. Females that miscarry for whatever reason are able to quickly return to fertility, mate with the new male, and suffer only a minor delay in reproduction. 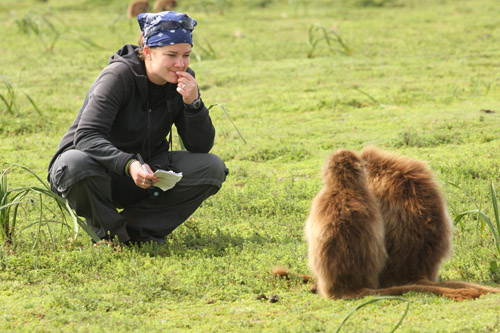 “Under conditions where infant survival is minimal due to infanticide, natural selection should favor females that retain the ability to lose their pregnancies prior to a hefty investment in gestation and lactation,” Beehner said.

Females who miscarried were able to reproduce much sooner than females that suffered infanticide, supporting the idea that terminating a pregnancy is an adaptive strategy for females after the dominant male is ousted.

Dominant males are replaced by a bachelor after about 3 years. In the months after a male replacement, nearly 44 percent of the infants in the group are lost to infanticide by the new male.

These statistics yield yet another benefit to miscarriage. 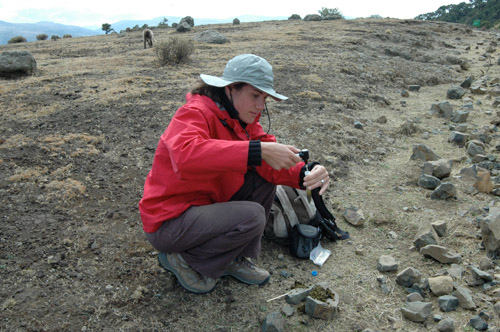 Jacinta Beehner, an assistant professor in the Departments of Psychology and Anthropology, processing a hormone sample in the field while a female gelada looks on from the distance. Image credit: Thore Bergman

“Females that immediately conceive with an incoming male have a high probability that the new sire will remain dominant until the offspring is weaned,” said Eila Roberts, a graduate student in psychology and the study’s first author. This ensures that this infant will probably live to see adulthood.

In five years of data (representing 110 females from 21 different groups across 28 male replacements), only two births were observed during the six months after a male replacement: a time-period where all pregnancies had to have been sired by the previous male (since gestation for geladas is 6 months long). For a non-seasonally breeding primate that usually has births distributed across all months of the year, this is extremely unlikely to happen by chance. 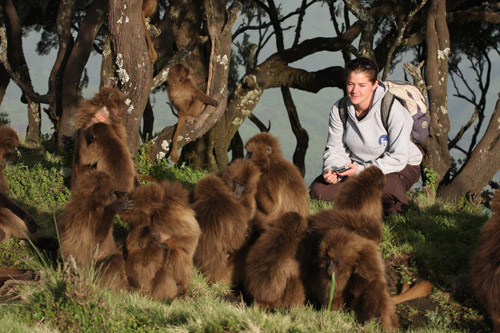 Upon a closer look using hormonal data, of the 10 females who were hormonally-confirmed as pregnant at the time of a male replacement, eight of them miscarried and returned to fertility shortly afterwards.

Researchers said it’s unclear how widespread the Bruce effect may be across mammals – especially in wild populations – because data are scarce.

The other researchers include Amy Lu, a post-doctoral researcher in psychology; and Thore Bergman, an assistant professor in the Departments of Psychology and Ecology & Evolutionary Biology.