The Next Big Step Toward Atom-Specific Dynamical Chemistry

For Ali Belkacem of Berkeley Lab’s Chemical Sciences Division, “What is chemistry?” is not a rhetorical question.

“Chemistry is inherently dynamical,” he answers. “That means, to make inroads in understanding – and ultimately control – we have to understand how atoms combine to form molecules; how electrons and nuclei couple; how molecules interact, react, and transform; how electrical charges flow; and how different forms of energy move within a molecule or across molecular boundaries.” The list ends with a final and most important question: “How do all these things behave in a correlated way, ‘dynamically’ in time and space, both at the electron and atomic levels?”

Making the most of spectroscopy

Belkacem’s research focuses on creating better ways to track the evolution of energy and charge on the molecular level. For this purpose, one of the sharpest tools in his chemist’s kit goes by the jawbreaking name “nonlinear multidimensional spectroscopy.” 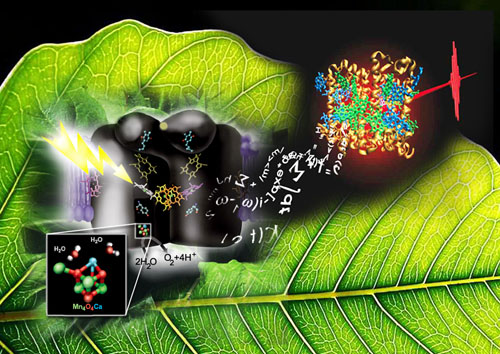 For an outstanding example of the vital questions nonlinear multidimensional electronic spectroscopy can answer, Belkacem points to the work of Graham Fleming, founder of Berkeley Lab’s Physical Biosciences Division. Fleming has tracked energy flow in photosynthesis, demonstrating the electronic coherence among structures in the photosynthetic reaction centers that transform sunlight energy into chemical energy.

“That was done with visible light,” Belkacem says. “We want to do this same kind of chemistry with x-rays.” That’s because understanding photosynthesis and other complex systems means learning how electronic charge is transferred among specific atomic sites, in particular by grasping how valence states are correlated.

Valence electrons – the electrons in the outermost orbitals of atoms and molecules – determine chemical bonding, electrical conductivity, and a host of other properties. But soft x‑rays and energetic ultraviolet light can probe the core electrons of atoms, which uniquely identify atomic species in a way that valence electrons can’t.

The most demanding and informative experiments of this kind – which would tackle the compound task of identifying atoms and tracking their correlated valence states quickly and efficiently, over a broad range of materials and processes – require facilities that don’t exist yet. In a research project supported by Berkeley Lab’s Laboratory Directed Research and Development program, Belkacem is using powerful laboratory-scale lasers to test whether multidimensional nonlinear x-ray spectroscopy is practical for the light sources of the future – and just what combination of beam characteristics is needed to define them.

Going where only x-rays can reach

In nonlinear multidimensional spectroscopy, spectroscopy means mapping how a system behaves by seeing how it emits or absorbs different frequencies of light; nonlinear means that the light that goes in isn’t precisely proportional to the light that comes out. It’s not a single overall effect that’s being measured, but individual contributions from different components of the system – different kinds of atoms, say, or different spatial locations.

Nonlinear and multidimensional spectroscopy results when a light-field perturbs a molecule so that subsequent light-fields see changes in the molecular states. For this kind of spectroscopy, it’s important that the different light pulses interact with the molecular states over very short time periods, in such a way that the information imparted by the first light pulse doesn’t get lost or dissipated. 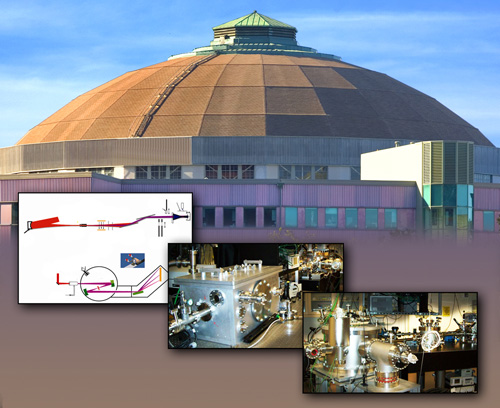 The emergence of x-ray lasers holds tremendous promise for this field, but the first generation of free-electron lasers (FELs) to come online in Europe and the U.S. does not yet provide the right combination of average power, very short pulses, multi-color pulses (more than one wavelength of light), and very high repetition rates – a hundred thousand pulses a second or more – essential to the future light sources that will operate in the soft-x-ray and extreme-ultraviolet regime.

At present, Belkacem’s team generates x-rays with a “table-top” laser. They begin by focusing an intense laser beam on a cell containing gas under high pressure. The laser excites electrons in the gas and recaptures their energy, yielding very short pulses of high-frequency x-rays at multiples (harmonics) of the laser’s original energy.

While high-harmonic generation with Belkacem’s laboratory-scale laser can generate high-energy pulses, beam intensity is low and the pulse repetition rate is limited to 50 hertz (50 times a second). Nevertheless the x-ray beams open new pathways for spectroscopy.

“X-rays excite an atom’s core electrons; that’s both the strength and the technical challenge of multidimensional x-ray spectroscopy,” Belkacem says. He compares the challenge to a soccer match: “You want the x-rays to be spectators that will report how the game is being played – not become players themselves. Since the chemistry is in the valence electrons, somehow you have to use x-rays to involve the core electrons for atom specificity, but without letting them dictate the electron dynamics or the charge migration.”

To tag a specific kind of atom’s valence electrons, Belkacem uses a powerful nonlinear spectroscopic technique called stimulated coherent Raman scattering, which has already been well established in the infrared and visible-light regions of the spectrum. The trick is to tune the first x-ray photon, the probe, so that it boosts a core electron to a higher orbital without kicking it right out of the atom and leaving an excess of positive charge. A lower-energy electron can then be stimulated down with a second x-ray to fill the hole, leaving the atom in a state of valence excitation.

To assess critical needs for future light sources, Belkacem and his team will first examine the electronic states of neon, which he calls “an ideal test bed” to prove the feasibility of the approach.

Electrons are arranged in specific orbitals, outward from an atom’s nucleus, and are designated by their spin, orientation, and energy. Neon has 10 electrons, two in the inner “1s” shell and (like almost all noble gases) eight in its valence shell, the outer “2” shell. The two electrons in the inner shell, plus two more in the valence shell, are in s orbitals (the 1s and 2s orbitals). The remaining six valence electrons are in 2p orbitals. 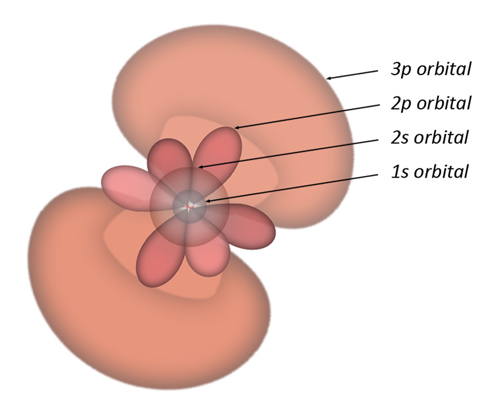 A neon atom has two electrons in the 1s orbital, two in the 2s orbital, and six in the 2p orbital; the 3 shell is normally unoccupied. In the first test of nonlinear multidimensional spectroscopy with neon, Belkacem’s team will boost an electron in the relatively low-energy 2s orbital into the 3p orbital, an excited valence state. Within quadrillionths of a second a 2p electron will fill the 2s “hole,” so that when the 3p electron relaxes, it will emit a photon signaling the transaction. Image credit: Berkeley Lab

In the experiment, an x-ray photon tuned to the energy of the 2s shell will boost an electron into the neon atom’s previously unoccupied 3p shell. This needs energy on the order of 45 electron volts – a factor 20 to 30 times higher than typically used in the visible-light range. Within femtoseconds (quadrillionths of second), a second x-ray is sent to stimulate one of the 2p electrons into the hole. This fills the 2s shell but leaves behind an excited valence state – which, when the electron in the 3p orbital relaxes by emitting a characteristic photon, signals the experimenters.

As a noble gas, neon is nonreactive and forms molecules only with itself. “But once we’ve established the principle with neon, we plan to test the system on water and on carbon dioxide. In these studies the question will be, can we tag the oxygen atoms?” says Belkacem.

“In our final experiment, we’ll use three beams. The first pair will excite the atoms we want to follow in time, and the third will let us track how the valence states at different sites in the compound are coupled as the process evolves in space.”

The new laser’s main goal will be to address questions of crucial interest to designers of the next generation of FEL-based soft-x-ray light sources. Says Belkacem, “There are still many questions about what harmonics we should use for seeding FELs” – seeding is a technique for attaining specific higher energies – “what harmonic powers are needed, and how can we produce these high quality, high intensity harmonics at very high repetition.”

For a next-generation light source, says Belkacem, these questions are no more rhetorical than the question “What is chemistry?” itself. “To do the kind of chemistry we and many other researchers need to understand fundamental processes, we must identify the most critical of the various capabilities of a next-generation light source – those that will enable the most transformational science from the outset.”

Belkacem’s laser studies not only break ground for a new way of doing chemical research in the lab, they are critical to establishing what America’s premier facilities for doing this and many other kinds of science will be in future. One-of-a-kind new technology on the laboratory scale will open a new path to crucial experiments at chemistry’s leading edge.

More about light sources and seeding is at https://newscenter.lbl.gov/feature-stories/2009/12/21/accelerators-tomorrow-part1/

More about high harmonics in table-top laser studies is at https://newscenter.lbl.gov/feature-stories/2010/04/16/catching-electrons-in-the-act/