The Wondrous World of Insects

*UA Insect Discovery program facilitators have spent years teaching Tucson area youth about the lives of insects while also encouraging them to pursue higher education and studies in science. The program is getting even more financial backing and other support.*

Holding a square, plastic container, Kathleen Walker turned toward the captivated group of dozens of elementary school students seated before her.

She asked: “Do you think there’s a cow in here?” The kindergarteners respond in unison: “No!” Walker smiled a bit. “No, that would be silly, right?”

The show and tell was part of Insect Discovery, a University of Arizona program now in its seventh year that receives support from the UA and the National Science Foundation. 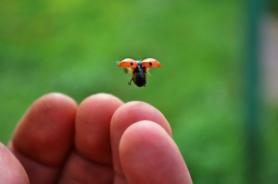 A ladybug takes flight. UA faculty members and students who head up the Insect Discovery program teach young children about the wonders of the insect world, while also informing them about college and careers in science. Most of the schools Insect Discovery services have a high percentage of students who are of color or who are receiving free or reduced-cost school lunches. Image credit: University of Arizona

After gently pulling something from the box, Walker, a UA entomologist, opened her hands to reveal one of her “favorite animals,” an elongated oval-shaped insect nearly the length of an iPhone named “Bob.”

This drew some “whoas,” giggles, scrunched noses and wide-eyed expressions. Then Walker explained that Bob was a cockroach from Madagascar.

“Some people think it’s made out of wood, but it’s made out of bug,” Walker said about Bob, later showing the group live millipedes and display cases of beetles, butterflies, moths and other insects.

Insect Discovery reaches more than 2,000 students annually, educating them about insect anatomy, behavior and biology while informing them about the wonders of science.

“What this does is expose students to science – not that the whole class would go on to be scientists, but that they would each have some familiarity, some appreciation and some excitement about it,” said Goggy Davidowitz, a UA assistant professor of entomology.

Davidowitz, who also helped create and launch Insect Discovery, has funded the program via his own research grants, encouraging others to do the same. After receiving a CAREER Award in 2010 from NSF, he earmarked five years of funding. 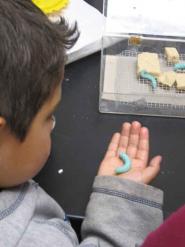 UA entomologist Kathleen Walker heads up the Insect Discovery program to teach young students how to be gentle with insects and also to observe them. "What I'm excited about is giving them a sense of what science is really about – that it is not about an old man in a white lab coat blowing things up, but about observing and trying to understand just using what you can see and test." (Photo courtesy of Kathleen Walker)

“This shows the community that the University is very interested in outreach,” Davidowitz said, adding that he and others continue to solidify additional external funding for the program to expand the program.

It is an important venture.

In a time full of high-stakes standardized exams and a greater emphasis on science, technology, engineering and mathematics, the STEM fields, Walker said programs like Insect Discovery are crucial to aid educators in teaching students, and also reinforcing their classroom instruction.

In establishing the program, Walker volunteered with then-UA graduate student Laura Connors. Connors, who currently works for of the University of Alaska-Fairbanks, originally posed the idea for the program in 2005.

Since then, Insect Discovery has served nearly 400 Tucson area classrooms and offered about 150 workshops, connecting with more than 10,000 youth.

“There is a long time between now and college, but sometimes these experiences you have when you are little take you farther than you think,” said Walker, an assistant professor of entomology.

Walker, Davidowitz and others intend that students glean an understanding of the important role insects play in the environment while also better understanding the value of education and scientific exploration and discovery.

“I can’t have access to these insects, so the kids wouldn’t be able to get this kind of experience,” said Ann Minnich, a kindergarten teacher at Blenman Elementary School where Walker recently presented the program.

“Kids need exposure to these sorts of things. It opens up their eyes,” Minnich said. “It also teaches them to care for the animals and to see the value in them.”

“When you get to see and touch the insects, it is another kind of experience,” she added. “It’s an experience all the kids can use to grow into new knowledge.” 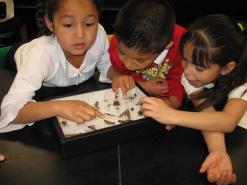 "There is a lot of fear, and insects are very misunderstood creatures. That's one of the things we focus on – getting kids to recognize that these are their neighbors rather than scary monsters," said UA entomologist Kathleen Walker. (Photo courtesy of Kathleen Walker)

In the spring, the program is offered on the UA campus, allowing teachers to bring their classes to campus. During the visits, undergraduate students – after several weeks of training and developing educational stations – teach the younger students about insect biology.

“So many of the kids who come to the workshop have never set foot on the campus before, and we want them to come and feel welcome and excited to be here,” said Walker, also a senior program coordinator for the UA BIO5 Institute and a member of UA’s Center for Insect Science.

Davidowitz noted that more than 100 undergraduate preceptors and eight graduate students have been trained through the program to work directly with the young students.

“It’s amazing when you see these kids and they want to hold the insects and take them home. You see their eyes opening, and it’s just amazing,” Davidowitz said.

“The public, in general, needs to have a better understanding of what science is,” he also said. “There is a real necessity for science education today and early exposure can really excite children about science.”