It is a well-established fact that as we grow older our bones become more brittle and prone to fracturing. It is also well established that loss of mass is a major reason for older bones fracturing more readily than younger bones, hence medical treatments have focused on slowing down this loss. However, new research from scientists at the U.S. Department of Energy (DOE)’s Lawrence Berkeley National Laboratory (Berkeley Lab) shows that at microscopic dimensions, the age-related loss of bone quality can be every bit as important as the loss of quantity in the susceptibility of bone to fracturing. 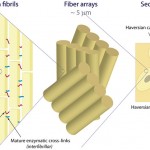 Using a combination of x-ray and electron based analytical techniques as well as macroscopic fracture testing, the researchers showed that the advancement of age ushers in a degradation of the mechanical properties of human cortical bone over a range of different size scales. As a result, the bone’s ability to resist fracture becomes increasingly compromised. This age-related loss of bone quality is independent of age-related bone mass loss.

“In characterizing age-related structural changes in human cortical bone at the micrometer and sub micrometer scales, we found that these changes degrade both the intrinsic and extrinsic toughness of bone,” says Berkeley Lab materials scientist Robert Ritchie. “Based on multiscale structural and mechanical tests, we attribute this degradation to a hierarchical series of coupled mechanisms that start at the molecular level.”

Ritchie, who holds joint appointments with Berkeley Lab’s Materials Sciences Division and the University of California (UC) Berkeley’s Materials Science and Engineering Department, is the senior author of a paper published in the Proceedings of the National Academy of Science (PNAS) that describes this work. The paper is titled “Age-related changes in the plasticity and toughness of human cortical bone at multiple length scales.” 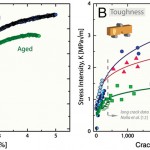 These graphs show the mechanical properties of human cortical bone as a function of age for (A) strength and (B) fracture-toughness. Image credit: Lawrence Berkeley National Laboratory

Human cortical or compact bone is a composite of collagen molecules and nanocrystals of a mineralized form of calcium called hydroxyapatite (HA). Mechanical properties of stiffness, strength and toughness arise from both the characteristic structure at the nanoscale, and at multiple length scales through the hierarchical architecture of the bone. These length scales extend from the molecular level to the osteonal structures at near-millimeter levels. An osteon is the basic structural unit of compact bone, comprised of a central canal surrounded by concentric rings of lamellae plates, through which bone remodels.

“Mechanisms that strengthen and toughen bone can be identified at most of these structural length scales and can be usefully classified, as in many materials, in terms of intrinsic toughening mechanisms at small length scales, promoting non-brittle behavior, and extrinsic toughening mechanisms at larger length scales acting to limit the growth of cracks,” Ritchie says. “These features are present in healthy, young human bone and are responsible for its unique mechanical properties. However, with biological aging, the ability of these mechanisms to resist fracture deteriorates leading to a reduction in bone strength and fracture toughness.” 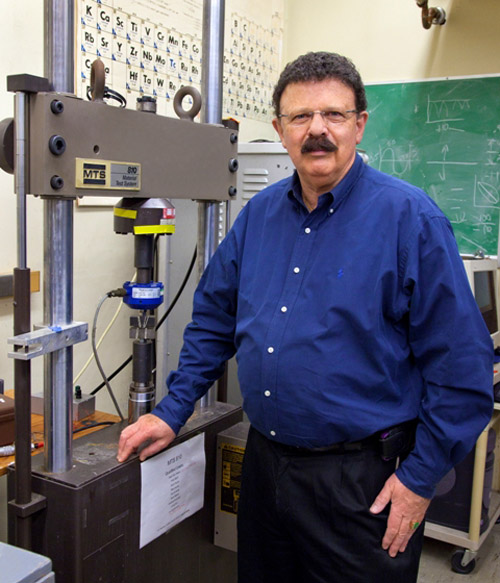 Working with the exceptionally bright beams of x-rays at Berkeley Lab’s Advanced Light Source (ALS), Ritchie and his colleagues analyzed bone samples that ranged in age between 34 and 99 years. In situ small-angle x-ray scattering and wide-angle x-ray diffraction were used to characterize the mechanical response of the collagen and mineral at the sub micrometer level. A combination of x-ray computed tomography and in situ fracture-toughness measurements with a scanning electron microscope were used to characterize effects at micrometer levels.

“We found that biological aging increases non-enzymatic cross-linking between the collagen molecules, which suppresses plasticity at nanoscale dimensions, meaning that collagen fibrils can no longer slide with respect to one another as a way to absorb energy from an impact,” Ritchie says. “We also found that biological aging increases osteonal density, which limits the potency of crack-bridging mechanisms at micrometer scales.”

These two mechanisms that act to reduce bone toughness are coupled, Ritchie says, in that the increased stiffness of the cross-linked collagen requires energy to be absorbed by “plastic” deformation at higher structural levels, which occurs by the process of micro cracking.

“With age, remodeling of the bone can lead the osteons to triple in number, which means the channels become more closely packed and less effective at deflecting the growth of cracks,” he says. “This growing ineffectiveness must be accommodated at higher structural levels by increased micro cracking. In turn, the increased micro cracking compromises the formation of crack bridges, which provide one of the main sources of extrinsic toughening in bone at length scales in the range of tens to hundreds of micrometers. Thus, age-related changes occur across many levels of the structure to increase the risk of fracture with age.”

This research was supported by a grant from the National Institutes of Health. The Advanced Light Source is a national user facility supported by the DOE Office of Science.