PASADENA, Calif. –– NASA is giving the public the power to journey through the solar system using a new interactive Web-based tool.

The “Eyes on the Solar System” interface combines video game technology and NASA data to create an environment for users to ride along with agency spacecraft and explore the cosmos. Screen graphics and information such as planet locations and spacecraft maneuvers use actual space mission data.

“This is the first time the public has been able to see the entire solar system and our missions moving together in real time,” said Jim Green, director of NASA’s Planetary Science Division at the agency’s Headquarters in Washington. “It demonstrates NASA’s continued commitment to share our science with everyone.” 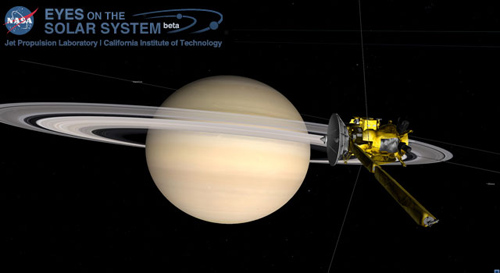 NASA's new Web-based application, "Eyes on the Solar System," gives people the power to journey through the solar system without leaving their computers. Image credit: NASA/JPL-Caltech

The virtual environment uses the Unity game engine to display models of planets, moons, asteroids, comets and spacecraft as they move through our solar system. With keyboard and mouse controls, users cruise through space to explore anything that catches their interest. A free browser plug-in, available at the site, is required to run the Web application.

“You are now free to move about the solar system,” said Blaine Baggett, executive manager in the Office of Communication and Education at NASA’s Jet Propulsion Laboratory (JPL) in Pasadena, Calif. “See what NASA’s spacecraft see — and where they are right now — all without leaving your computer.”

Users may experience missions in real time, and “Eyes on the Solar System” also allows them to travel through time. The tool is populated with NASA data dating back to 1950 and projected to 2050.
The playback rate can be sped up or slowed down. When NASA’s Juno spacecraft launched on Aug. 5, 2011, users could look ahead to see the mission’s five-year journey to Jupiter in a matter of seconds.

Point of view can be switched from faraway to close-up to right “on board” spacecraft. Location, motion and appearance are based on predicted and reconstructed mission data. Dozens of controls on a series of pop-up menus allow users to fully customize what they see, and video and audio tutorials explain how to use the tool’s many options. Users may choose from 2-D or 3-D modes, with the latter simply requiring a pair of red-cyan glasses to see.

“By basing our visualization primarily on mission data, this tool will help both NASA and the public better understand complex space science missions,” said Kevin Hussey, manager of Visualization Technology Applications and Development at JPL, whose team developed “Eyes on the Solar System.”

“Eyes on the Solar System” is in beta release. It has been demonstrated at science conferences, in classrooms and at the 2011 South by Southwest Interactive Conference in Austin, Texas.

Designers are updating “Eyes on the Solar System” to include NASA science missions launching during the coming months, including GRAIL to the moon and the Mars Science Laboratory Curiosity rover.

“Eyes on the Solar System” and an introduction video are available at https://solarsystem.nasa.gov/eyes .