Testing the Water for Bioenergy Crops

Energy researchers and environmental advocates are excited about the prospect of gaining more efficient large-scale biofuel production by using large grasses like miscanthus or switchgrass rather than corn.

They have investigated yields, land use, economics and more, but one key factor of agriculture has been overlooked: water.

“While we are looking for solutions for energy through bioenergy crops, dependence on water gets ignored, and water can be a significant limiting factor,” said Praveen Kumar, an environmental engineer and atmospheric scientist at the University of Illinois at Urbana-Champaign.

“There are many countries around the world that are looking into biofuel energy, but if they are adopting these [large grasses] into their regular policy, they need to take into account the considerations for the associated demand for water.” 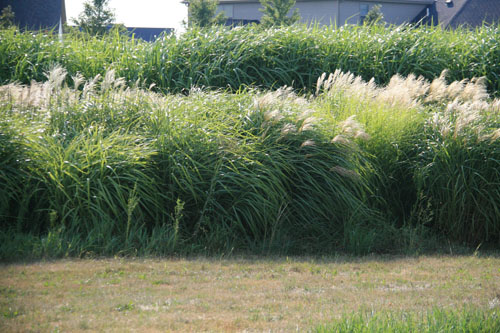 Kumar led a study, the results of which are published this week in the journal Proceedings of the National Academy of Sciences, detailing links between the hydrologic cycle and large-scale land conversion, both now and as growing conditions change in the future.

“To meet the growing energy needs of humanity-at-large in a sustainable manner, it’s important to understand the implications of switching to alternate energy options such as bioenergy,” said Anjuli Bamzai, program director in the National Science Foundation’s Division of Atmospheric and Geospace Sciences, which funded the research.

Miscanthus and switchgrass have a very different above-ground foliage structure from corn–more surface area and much denser growth.

This is good for maximizing the amount of biomass that an acre of land can produce, Kumar said, but it also increases water use.

Miscanthus and switchgrass intercept light and rain differently from corn and lose more water through transpiration, causing them to pull more water from the soil.

The result of large-scale adoption would be a reduction in soil moisture and runoff, but an increase in atmospheric humidity. 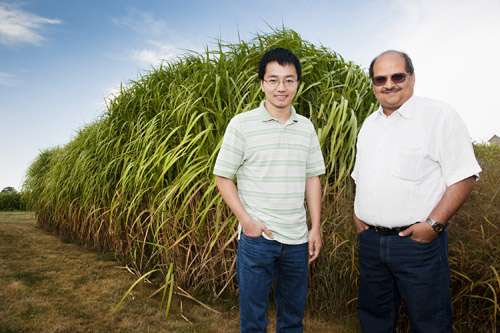 “All these together account for changes in hydrology, just from land-use change,” said Kumar. “Then, if you impose further–higher carbon dioxide in the atmosphere, higher temperatures and changes in rainfall patterns–they add more modulation to the water-use pattern.”

Kumar used a sophisticated model he and colleagues developed to study crops’ fine sensitivities to temperature and carbon dioxide changes in the atmosphere. The model incorporates the acclimation response of plants to changing climate.

Using the predictive model, the researchers found that net water use will increase further as a result of rising temperatures and carbon dioxide

However, rising temperatures counteract this effect, as the plants will transpire more while their pores are open, losing more water than they save.

This additional water loss compounds the increase in water usage from land conversion.

In the U.S. Midwest, rainfall should remain sufficient to meet water demand, according to Kumar.

However, areas that rely on irrigation could find they have less water to meet higher demands, which could increase the net cost of large-scale land conversion and put pressure on already stressed water resources.

“If we’re going to solve energy problems through bioenergy crops, there are collateral issues that need to be considered,” Kumar said.

“Water is a significant issue. It’s already a scarce resource across the globe, and the need for it is only going to increase. The cost of that should be factored in to the decision making.”

Graduate student Phong V.V. Le and former postdoctoral researcher Darren Drewry, who is now at the Max Planck Institute in Germany, are co-authors of the paper.