Taking Measure of the Greenhouse Effect

WASHINGTON — Scientists have long known that heat-absorbing components of Earth’s atmosphere, such as clouds and certain 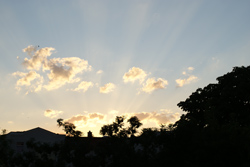 gases, prevent our planet from being an ice-covered ball. Now a study, for the first time, comprehensively calculates the relative contributions of the components responsible for that heating, known as the greenhouse effect.

Besides clarifying an important aspect of climate science, the study also demonstrates that rising concentrations of one heat-trapping gas — carbon dioxide — leads to much more greenhouse warming than just the heat the gas absorbs directly itself.

Various studies have looked at the contributions of water vapor, CO2, and other greenhouse gases. But none had systematically estimated the contributions of each of the main players, says climate scientist Gavin Schmidt of NASA Goddard Institute for Space Studies, and lead author of the new research.

These contributions “are among the most misquoted statistics in public discussions of climate change,” the authors write. Their study has been accepted for publication in the Journal of Geophysical Research- Atmospheres, a journal of the American Geophysical Union.

“The existing literature is quite confused,” Schmidt says. “If you ask a lot of climate scientists, straight up, ‘how much of the current greenhouse effect is due to carbon dioxide?’, you get all sorts of numbers.”

With the new study, Schmidt says, the team is aiming to provide a single estimate for the contribution of each of the major factors, which can help cut through the confusion and serve as a reference for public discussions of climate change.

The new study found that water vapor was the biggest contributor to the greenhouse effect, responsible for about 50 percent of the effect.

After that comes CO2, contributing about 20 percent of the greenhouse effect.

Other trace gases and aerosols contribute only about 5 percent, the study found. That includes a variety of greenhouse gases such as methane, which comes from burping livestock, irrigation, land fills and mining activities, and nitrous oxide, also known as laughing gas, which comes mainly from the decomposition of chemical fertilizers on croplands. Soot in the air also has a warming effect, making up part of this 5 percent.

Schmidt and colleagues arrived at these numbers by tweaking computer simulations of the planet, known as climate models. They did one set of tests where they subtracted each of these contributors—such as CO2—one at a time, to see how much less heat would be trapped. They also did another set of tests in which they removed all the greenhouse contributors, and then added them back individually. The numbers above are, in essence, averages of the results from these two tests.

Overall, the greenhouse effect warms the planet by about 33 °C, turning it from a frigid ice-covered ball with a global average temperature of about -17 °C, to the climate we have today. Heat-absorbing components contribute directly to that warmth by intercepting and absorbing energy passing through the atmosphere as electromagnetic waves. But that direct heating effect can also have secondary effects—for instance, when additional CO2 raises the planet’s temperature, then the air can become more humid, carrying more heat-trapping water vapor. This in turn heats the planet further, amplifying the effect of a dose of additional CO2. This is a main reason why scientists are concerned that people are rapidly raising the levels of CO2 in the atmosphere.

To test increasing CO2’s effect, the researchers simulated the consequences of doubling its concentration in their model. The experiment resulted in some additional greenhouse heating attributable directly to the added gas soaking up more energy, but 5 times as much of a boost in greenhouse heating overall. The researchers report that “the extra net absorption by CO2 has been amplified by the response of water vapor and clouds…”

Even though methane, nitrous oxide, ozone, soot, and a variety of other factors only contribute about 5 percent of today’s greenhouse effect, “you can’t ignore them,” Schmidt says. “Even though their contribution is small, they’re changing very fast,” he adds. Preventing them from adding further to the blanket of heat-trapping substances is another lever, besides cutting CO2 emissions, that could fight global warming.