Catalysis may initiate almost all modern industrial manufacturing processes, but catalytic activity on solid surfaces is poorly understood. This is especially true for the cellulase enzymes used to release fermentable sugars from cellulosic biomass for the production of advanced biofuels. Now, researchers with the Lawrence Berkeley National Laboratory (Berkeley Lab) through support from the Energy Biosciences Institute (EBI) have literally shed new light on cellulase  catalysis.

Using an ultrahigh-precision visible light microscopy technique called PALM – for Photo-Activated Localization Microscopy – the researchers have found a way to improve the collective catalytic activity of enzyme cocktails that can boost the yields of sugars for making fuels. Increasing the sugar yields from cellulosic biomass to help bring down biofuel production costs is essential for the widespread commercial adoption of these fuels.

“The enzymatic breakdown of cellulosic biomass into fermentable sugars has been the Achilles heel of biofuels, a key economic bottleneck,” says chemical engineer Harvey Blanch, one of the leaders of this research. “Our research provides a new understanding of how multiple cellulase enzymes attack solid cellulose by working in concert, an action known as enzyme synergy, and explains why certain mixtures of cellulase enzymes work better together than each works individually.”

PALM – for Photo-Activated Localization Microscopy – enables researchers to quantify how and where enzymes are binding to the surface of cellulose in heterogeneous surfaces, such as those in plant cell walls. Image credit: Berkeley Lab

Blanch, a long-time leader in biofuels research, is one of three corresponding authors of a paper on this study in the journal Nature Chemical Biology. The paper is titled “A single-molecule analysis reveals morphological targets for cellulase synergy.” The other corresponding authors are Jan Liphardt and Douglas Clark. All three hold joint appointments with Berkeley Lab and the University of California (UC) Berkeley.

Synthesized from the sugars in the cellulosic biomass of grasses, other non-food crops and agricultural waste, advanced biofuels represent a sustainable, non-polluting source of transportation fuel that would also generate domestic jobs and revenue. A recent report from the National Research Council stressed the need for advanced biofuels if the United States is to significantly reduce its use of fossil fuels in the coming decades. Fossil fuels are responsible for the annual release of nearly nine billion metric tons of excess carbon into the atmosphere.

Unlike the simple starch-based glucose sugars in corn and other grains, the sugars in cellulosic biomass are complex polysaccharides that must be extricated from a tough polymer called lignin and then broken down into fermentable glucose, a process called saccharification. Because individual cellulases interact preferentially with cellulose structures based on distinct structural motifs, saccharification is carried out with mixtures of cellulase enzymes – called enzyme cocktails. To date the efficiency of these cellulose-to-glucose conversions has been limited, in part because of a limited ability to probe and study the interactions between cellulase enzymes and cellulose.

“The cellulose structures to which cellulase enzymes bind have always been classified as either crystalline or amorphous but these categories were probably more reflec­tive of the limitations of imaging methods than the underlying structural organization of the cellulose,” says Jerome Fox, lead author of the Nature Chemical Biology paper and a member of Blanch and Clark’s research groups. “Previously, it was not possible to resolve individual proteins on densely labeled heterogeneous surfaces, such as those in plant cell walls, and determine the specific location where an individual enzyme molecule was binding.” 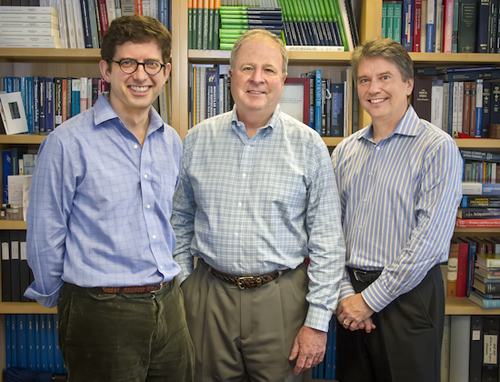 From left, Jan Liphardt, Harvey Blanch and Doug Clark led the development of a way to improve the collective catalytic activity of enzyme cocktails that can boost the yields of sugars for making advanced biofuels. (Photo by Roy Kaltschmidt)

Enter PALM, a technique in which target proteins are labeled with tags that fluoresce when activated by weak ultraviolet light. By keeping the intensity of the UV light sufficiently low, researchers can photoactivate individual proteins to image them and determine their location.

“We’re the first to use PALM to study the interplay of enzyme activity and substrate heterogeneity,” says Liphardt, an expert in PALM technology. “This enables us to quantify how and where enzymes are binding to the cellulose.”

Working with cotton – a well-defined cellulosic material – as their model system, the researchers applied PALM imaging in combination with a mathematical analysis they devised. Their results showed that cellulases exhibit specificities for cellulose structures that have many different levels of organization, ranging from the highly ordered to the highly disordered. They also developed a metric to show that combinations of cellulases designed to bind to cellulose structural organizations that are similar but not identical can generate valuable synergistic activity.

“We found that the specificity of a cellulase for a particular level of cellulose organization influences its ability to catalyze cellulose hydrolysis alongside other cellulases with different specificities,” says Clark. “In particular, cellulases that bind within similar, but non-identical organizations have synergistic activity that could not be predicted from the more classical crystalline-or-amorphous cellulose classification system.”

The new PALM-based technique should allow enzyme cock­tails to be optimally matched to the structural organizations of particular biomass substrates, such as grass or wood, so that all potential avenues of enzyme synergy can be exploited. This will increase saccharification efficiencies, which in turn will help reduce biofuel production costs. The technique also has applications beyond biofuels.

“Our technique takes us toward a much more complete understanding of how enzymes work on solid surfaces,” Blanch says. “With this technique, we should be able to tell where any enzyme binds to a solid material and that can help in the design of cellulases for other cellulose materials”

In addition to Blanch, Liphardt, Clark and Fox, other co-authors of the paper “A single-molecule analysis reveals morphological targets for cellulase synergy” were Phillip Jess, Rakesh Jambusaria and Genny Moo.

EBI, which provided the funding for this research, is a collaborative partnership between BP, the funding agency, UC Berkeley, Berkeley Lab and the University of Illinois at Urbana-Champaign.