Concrete is the most widely used construction material in the world. However, many concrete roadways and bridges crack due to internal chemical reactions, temperature fluctuations or external chemical and physical stresses.

One internal chemical reaction is the Alkali-Silica Reaction (ASR) that destroys the concrete from within.

ASR occurs when alkalis such as sodium and potassium react with silica minerals within the concrete, creating a gel that absorbs water and expands. Over time, pressure from the expanding gel can crack the concrete, sometimes severely enough to destroy the structure. Little can be done to stop or reverse the reaction once it begins, and there is no effective method for early detection or remediation of ASR-affected concrete.

Julie Maresca and Thomas Schumacher, two researchers at the University of Delaware, are working to design a method to use microbes to identify ASR-damaged concrete before visible cracks appear. Samples have been provided by the Delaware Department of Transportation (DelDOT) from roadways, shoulders and overpasses throughout the state. The researchers will analyze DNA from these samples to identify specific strains of microbes that could be early indicators of ASR damage. 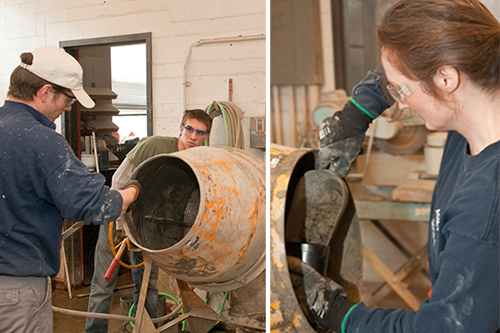 UD professors are working to design a method to use microbes to identify ASR-damaged concrete before visible cracks appear. Photos by Doug Baker

“ASR represents a real challenge for our civil infrastructure and effective ways to detect and potentially mitigate the reaction are needed,” said Schumacher, an assistant professor of civil and environmental engineering whose expertise lies in non-destructive testing and structural health monitoring of roadways and bridges.

“Our objective is to study microbes that live on concrete and find out whether the species there are different in the presence of ongoing ASR,” added Maresca, also an assistant professor of civil and environmental engineering with a background in microbiology.

She explained that most microbes prefer to live in moist environments at a neutral pH of 7. Concrete, however, is a dry substance with a high pH — around 12 — and a very high salt content. “The fact that any microbe can live in this extremely harsh environment is amazing,” she said.

When ASR occurs, the gel that forms changes the chemistry of the concrete and thus the environment in which the microbes live. Species that have adapted to the conditions of normal concrete may not survive as well in ASR-damaged concrete, and other kinds of microbes could move in.

Maresca and her students are recording the similarities and differences between microbial populations in undamaged and ASR-affected concrete. The researchers hope to identify microbes that are exclusive to the damaged samples. If successful, they believe this data could lead to a set of microbes associated with ASR-damaged concrete that could be used as biomarkers to reveal damage before visible cracking occurs.

Maresca’s previous background in understanding how microbes work and metagenomic sequencing, which involves extracting DNA from a sample and sequencing it to determine which genes are present or absent, has benefited the project.

“We can start to look at the adaptations these microbes are making in order to live in this environment and then compare them to microbes that live in similarly dry environments like deserts or salt pans,” she said.

A significant preliminary observation from microbes isolated from concrete in the lab is that most of the microbes appear to be colored. This may be a protection mechanism, Maresca said, since microbial pigments typically occur in the membrane rather than the cell itself and sometimes protect the cells from environmental stressors. Most of the strains also have minimal nutrient requirements and can survive at a wide range of salt concentrations.

“Our approach may fundamentally change the way we inspect and maintain our deteriorating civil infrastructure network,” remarked Schumacher, who along with Maresca, hopes to provide agencies like DelDOT a practical, non-destructive methodology for testing concrete structures in the field.

“It’s an inexpensive preventative measure that could enable DelDOT and other transportation personnel to take roadway samples and, by studying what microbes are present, determine if a particular structure is at risk or needs remediation or protection to prevent further damage.”

This work is supported in part through funding from the University of Delaware Research Foundation.