In an effort to identify the underlying causes of neurological disorders that impair motor functions such as walking and breathing, UCLA researchers have developed a novel system to measure communication between stem cell–derived motor neurons and muscle cells in a Petri dish.

The study provides an important proof of principle that functional motor circuits can be created outside the body using these neurons and cells and that the level of communication, or synaptic activity, between them can be accurately measured by stimulating the motor neurons with an electrode and then tracking the transfer of electrical activity into the muscle cells to which the neurons are connected.

When motor neurons are stimulated, they release neurotransmitters that depolarize the membranes of muscle cells. This allows calcium and other ions to enter the cells, causing them to contract. By measuring the strength of this activity, one can get a good estimation of the overall health of motor neurons. 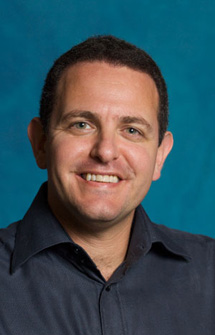 That estimation could shed light on a variety of neurodegenerative diseases, such as spinal muscular atrophy and amyotrophic lateral sclerosis (Lou Gehrig’s disease), in which communication between motor neurons and muscle cells is thought to unravel, said the study’s senior author, Bennett G. Novitch, an assistant professor of neurobiology and a scientist with the Eli and Edythe Broad Center of Regenerative Medicine and Stem Cell Research at UCLA.

The findings of the study appear May 4 in PLoS ONE, a peer-reviewed journal of the Public Library of Science.

“Now that we have this method to measure the strength of the communications between motor neurons and muscle cells, we may be able to begin exploring what happens in the earliest stages of motor neuron disease, before neuronal death becomes prevalent,” Novitch said. “This can help us to pinpoint where things begin to go wrong and provide us with new clues into therapeutic interventions that could improve synaptic communication and promote neuronal survival.”

Novitch said the synaptic communication activity his team was able to create and measure using muscle cells and motor neurons derived from mouse embryonic stem cells looks very similar to what is seen in a mouse, validating that their model is a realistic representation of what is happening in a living organism.

“That gives us a good starting point to try to model what happens in cells that harbor genetic mutations that are associated with neurodegenerative diseases,” he said. “To do that, we had to first define an activity profile of normal synaptic communication. Some research suggests that a breakdown in this communication can be an early indication of disease progression or possibly an initiating event. Neurons that cannot effectively transmit information to muscle cells will eventually withdraw their contacts, causing both the neurons and muscle cells to degenerate over time. Hopefully, we can now create disease models that will allow us to study what is happening.”

In this study, Novitch and his team, led by Joy Umbach, an associate professor of molecular and medical pharmacology at UCLA, used mouse embryonic stem cells to create the motor neurons, and they used previously established lines of muscle precursors to produce muscle fibers. They put both cells together in a Petri dish, and the cells were cultured in such a way as to encourage communication. Novitch said the team wanted to see if they would naturally form synaptic contacts and whether or not there was neural transmission between them.

In less than a week, the neurons had reached out to the muscle cells and assembled the protein networks needed for synaptic communication, Novitch said.

To measure the connections between the cells, the scientists used a technique called dual patch-clamp recording. Pipettes containing stimulating and recording electrodes are inserted into the membranes of the motor neurons and muscle cells, with special care being taken not to injure them. With this method, the researchers were able send an electrical current into the motor neurons and measure responses in the muscle cells, as well as visualize the muscular contractions.

“The in vitro system developed here might accordingly be expanded to assess the underlying cellular and molecular mechanisms that contribute to this decline in synaptic input to motor neurons,” the study states. “Thus, in addition to their utility for helping to answer fundamental biological questions, these co-cultures have clear applications in addressing problems of medical significance.”

Going forward, Novitch and his team hope to recreate and confirm the work using human stem cell–derived motor neurons and muscle cells and to measure the synaptic communications with newly developed optical recording methods, which are less invasive than the patch-clamp techniques used in this study.