Brighter, Smaller Probes to Uncover the Secret Lives of Proteins

Imagine tracking a deer through a forest by clipping a radio transmitter to its ear and monitoring the deer’s location remotely. Now imagine that transmitter is the size of a house, and you understand the problem researchers may encounter when they try to use nanoparticles to track proteins in live cells.

Understanding how a protein moves around a cell helps researchers understand the protein’s function and the cellular mechanisms for making and processing proteins. This information also helps researchers study disease, which at a cellular level may mean that a protein is malfunctioning, stops being made, or is sent to the wrong part of the cell. But nanoparticle probes that are too big can disrupt a protein’s normal activities.

Now a team of scientists led by Bruce Cohen of Lawrence Berkeley National Laboratory’s Molecular Foundry, a U.S. Department of Energy (DOE) nanoscience center, has figured out how to grow light-emitting nanocrystals small enough to not disrupt cell activity but bright enough to be imaged one at a time. Cohen is corresponding author of a paper in the February 16, 2012 issue of ACS Nano describing this work titled, “Controlled Synthesis and Single-Particle Imaging of Bright, Sub-10 nm Lanthanide-Doped Upconverting Nanocrystals.” Coauthors are Alexis Ostrowski, Emory Chan, Daniel Gargas, Elan Katz, Gang Han, James Schuck, and Delia Milliron.

“Scientists have been trying for years to study protein behavior by tagging them with light-emitting probes,” said Cohen. “But the problem is finding the right kind of probe. Our approach is to make upconverting-nanoparticle probes small enough that they shouldn’t disrupt protein behavior.”

In the past, researchers used fluorescent molecules or quantum dots as probes. Using state-of-the art optics and microscopes, researchers can resolve light coming from single molecules attached to proteins, which tells them where the protein is in a cell. The probe molecules in these experiments tend to degrade or “photobleach” rapidly, limiting researchers to just a few seconds of continuous imaging or a series of images taken seconds apart. The alternative probes, quantum dots, suffer less from photobleaching but instead they flicker on and off, similarly limiting their usefulness as probes.

The Foundry team wanted to avoid both blinking and bleaching, so they turned to nanocrystals of sodium yttrium fluoride (NaYF4) with trace amounts of lanthanide elements ytterbium and erbium, which, they discovered, emit bright, steady light ideal for bioimaging. More importantly, these nanocrystals “upconvert” light, absorbing low energy photons and re-emitting them at higher energies. 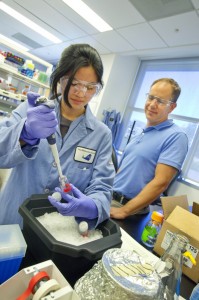 “Typically when something fluorescent absorbs light it then emits light at a slightly lower energy. Upconversion goes the other way, actually increasing the energy of the light being emitted,” Cohen said. “In our case we’re exciting with fairly low energy light, near infrared (beyond red in the visible spectrum), and then the nanocrystals emit light in the visible range, like green or red, which is actually higher in energy.”

The advantage of upconverting nanocrystals is that cells don’t upconvert light themselves. Normally when scientists image a cell using molecular probes, they use visible-wavelength light to both excite and image. Unfortunately, lots of things in the cell also reemit absorbed light at these wavelengths, which creates background noise in the image and forces scientists to use more probes and brighter light sources. With upconverting nanocrystals, researchers can gently stimulate with infrared light and look at visible light from single probes that stand clearly against a dark background.

“The other advantage to upconverting nanocrystals is that near-infrared light is a lot less damaging to cells than, say, visible or ultraviolet light,” said Cohen. “That means when we do these very long imaging experiments using intense powers of light to see single molecules, we’re using wavelengths that are pretty benign to cells.”

Nanocrystals of NaYF4 can form in two different geometries called alpha and beta. The beta-phase nanocrystals are more efficient at upconversion and thus better for bioimaging, but they’re also harder to grow. In order to nail down the growth parameters to get reproducible beta-NaYF4 nanocrystals, the team used the Molecular Foundry’s WANDA robot – the Workstation for Automated Nanomaterial Discovery and Analysis – developed by Berkeley Lab’s Emory Chan and Delia Milliron.

Smaller nanoparticles means less light, so the team had to find the sweet spot:

How small could they make them and still be able to image individual nanocrystals in a live system? “That’s one of the nice things about having this control is that we can not only make them down to, say, 5 nanometers, but we also know the conditions for making them bigger if we need to make them brighter,” Cohen said.

To help understand the geometry of their nanocrystals, coauthor James Schuck asked a summer intern to make a computer model of the crystal structure. Andrew Mueller, a high school student from Vistamar School in Los Angeles, went well beyond a simple crystal structure though.

“I started out just putting shapes together based on what was in the literature for the crystal,” said Mueller. “Then I wanted to show how it looked in a nanocrystal so I moved the camera around in the structure and panned out to show how atoms come together in a nanocrystal.” Mueller later added animation of two photons being absorbed and upconverted to a single emitted photon.

“The video is a good answer to the question, what is a nanocrystal?” said Cohen. “You can see that this is really just a few hundred or maybe a couple of thousand atoms in a nanocrystal, arranged in small, regular patterns.”

Next, the team wants to put the upconverting nanocrystals into action and actually map single proteins moving through a cell. “One of the things we’d like to study is how two neurons come together, how two brain cells come together to form a synapse — the spaces between neurons responsible for all brain activity,” Cohen said. “It’s known that there are certain pairs of proteins that come together from two neurons and they find each other and form a synapse but the question is, how many of those do you need? How many pairs of proteins? Is just one interaction enough to cause a synapse to form, do they reverse themselves, and so forth? Now that we know how to make exactly the nanoparticles we want, the next step is to test them in a cell.”

This work was supported by the U.S. Department of Energy Office of Science.