ABC’s Revenge, Lexus and Yahoo!’s IntoNow Team Up to Reward Fans Watching the Remaining Two Thrilling Episodes of the Season

SUNNYVALE, Calif. & NEW YORK — ABC’s Revenge and Yahoo! announced a new way to engage fans during live viewing of the hit series using IntoNow from Yahoo! — audiences will have an opportunity to enter to win a one-week getaway, coinciding with the July 4th weekend, at an oceanfront house in the Hamptons, Grayson-style, presented by Lexus.

With over 80 percent of tablet owners using their devices while watching TV, ABC and Yahoo! are teaming up for an industry-first, interactive experience during the last two episodes of this season’s hottest primetime show airing on WEDNESDAY, MAY 16 and WEDNESDAY, MAY 23 ( 10:00-11:00 p.m., ET.) Viewers will have the chance to engage with the show in new and compelling formats and be rewarded in the process. 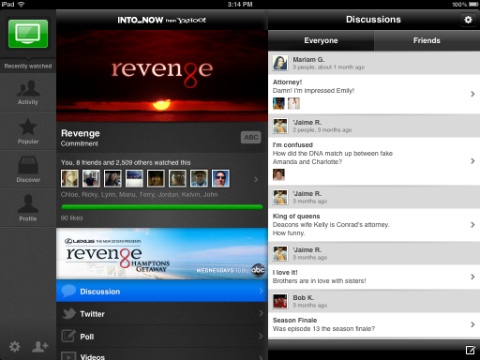 IntoNow from Yahoo!, ABC's Revenge and Lexus team up for sweepstakes getaway to the Hamptons (Graphic: Business Wire)

Beginning on May 16, when fans tag ABC’s Revenge with IntoNow app on their mobile phone or tablet device, they can participate in the following activities:

This partnership builds on the success of recent collaborations between the two companies, including earlier this year when ABC partnered with Yahoo! and IntoNow for the Republican presidential candidate debate.

At the tap of a button, IntoNow lets you connect with friends, discover exclusive content and related news stories, discuss the shows, participate in polls and quizzes, and even interact with some shows directly. IntoNow uses its patented SoundPrint technology to automatically identify live television content or previously aired content spanning more than 2.7 million airings. Over 160 U.S. TV channels are currently being indexed live, creating a rich database to build video discovery and programming experiences. In 2011, IntoNow was named Best Smartphone App by Time Magazine.

Emily Thorne ( Emily Van Camp ) is the newest arrival in the Hamptons. By all appearances, she’s a friendly and sophisticated “girl next door,” but the exclusive world she’s immersed herself in is tied to a dark family history and Emily is anything but what she seems. 17 years ago, Emily’s father was framed for a horrific crime by neighbors he trusted and sentenced to a life in prison. She never saw her father again and spent her childhood consumed by rage, loss and betrayal. Years later, Emily returns under an assumed identity with one endgame—REVENGE, every social overture a carefully planned chip at the foundation of her sworn enemies, until their lives come crashing down around them.

Revenge is created by Mike Kelley and executive produces along with Marty Bowen and Wyck Godfrey. The series is produced by ABC Studios.

Since its debut in 1989, Lexus has earned a reputation for high-quality products and exemplary customer service from its 230 dealers. Lexus is the luxury hybrid leader, offering five hybrids that provide the best in innovative technology and first-class luxury. When it began, Lexus offered two models of vehicles. Now, more than 20 years later, Lexus offers variations of 10 vehicles, from the sporty CT 200h hybrid to the V10 supercar, the LFA.