A recent review of research co-authored by Rose McDermott highlights the role that genes play in political preferences, an area of study that began to draw significant attention in the last decade. McDermott speaks with Courtney Coelho about this growing field of research, its evolutionary roots, and whether it means anything for the prediction of future election results.

The connection between biology and political science is relatively new, but it’s one that has grown rapidly, with a boom in research linking genetics and political preferences in the last decade. Rose McDermott, professor of political science, has done research on this topic and recently co-authored a review, published in Trends in Genetics, of studies in recent years.

Why was the time right to do this review now?

There had been isolated studies in this field of the genetic contribution to politics starting in the ’70s, but there’s been a real explosion in the last seven years. For most of history in political science, we’ve assumed that political outcomes result from things that are socialized: culture, history, the way our parents raised us, our educational system, all those kinds of things that are amenable to institutional change. So when researchers started seeing that some of the social attitudes were actually showing up as stronger linkages to genetics than some of the biological measures they were looking at, they started exploring it and realized that there was actually a genetic contribution to these social attitudes. But the research never got picked up by political scientists or social scientists; it just kind of stayed in the genetics community until the last seven or eight years. These studies really show that a very large proportion of our political preferences along a broad spectrum of conservative to liberal come from hereditary components.

How were the researchers able to make the link between genetics and political preferences?

Some of the studies included in the review looked at the genetic or biological contributions to things like attitudes or ideology. But others also look at the links to certain political behaviors, like voter turnout or political participation. The method for some of the studies involved genome-wide association tests, which look at genetic scans of people who may or may not be related and compare them. Others used a comparison between identical twins and fraternal twins. Identical twins are essentially the same person genetically while fraternal twins are like any other sibling pair that are born at different times. So by looking at the difference between that researchers can see what part of a variance in an outcome across a population can be attributed to what’s hereditary or genetic, what comes from a shared environment, and what part is personal experience that happens to one person but not to their sibling. Through a series of statistical tests the researchers pinpointed which differences in attitudes and ideology are attributable to a genetic or hereditary component. 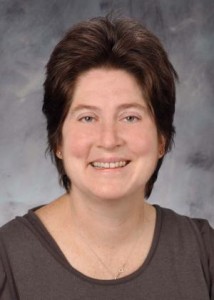 Rose McDermott. The genetic predisposition is about the liberal to conservative spectrum, not the American difference between Republican and Democrat. Image credit: John Abromowski/Brown University

Does this mean that genetics predict whether someone will affiliate as a Democrat or Republican?

We really do mean it in the broad spectrum of conservative to liberal, not in the restricted American sense of difference between Republicans and Democrats. And that doesn’t mean that you’re born with a particular attitude toward a particular thing like capital punishment. What it does mean is that these broad orientations, conservative or liberal, inform our understanding of attitudes that can shift in any given year or any given country. It might differ between Austrailia, Denmark and the United States and it might differ between attitudes in 1920 versus now. But the underlying propensity to be pretty conservative about protecting your in-group, to be protective about sex and reproductive issues, or to be quite liberal about them, appears to have this genetic foundation.

And that makes sense from an evolutionary perspective as well. It’s those topics that you can imagine humans over millennial time had repeated challenges around. We always had to worry about finding a mate and having children and raising our children. We always had to worry about defending ourselves against predators. And today, that may look like opposition to gay marriage and immigration and support for war, but the underlying propensity is along that spectrum. And what we see is that this happens across countries and across decades. The data is pretty clear. You can look across many populations over the course of 50 years and show that the genetic contribution to liberal versus conservative is pretty stable.

Knowing that this linkage exists, what’s the next step in the research?

What we’re trying to do now is look at both the contribution of genetic factors to certain outcomes, but also how the environment triggers the expression or suppression of certain gene expression so that it does or doesn’t manifest depending on what happens to you throughout your life. So looking at certain developmental experiences – the experience in utero, what kind of friends a person has, do they have a parent that’s become abusive or an addict, or has become incarcerated or dies or was their mother malnourished when she was pregnant or did they grow up in a famine or a drought – and how these very complex developmental and environmental factors, combined with your genetic propensity, lead to these outcomes that we care about — whether it’s broad outcomes like war or more specific outcomes like whether a person becomes a smoker or an alcoholic.

What might the future political implications of the research be?

Knowing where to allocate money and what kinds of strategies work better for which kinds of people would be one of the things I would hope this work could benefit for in terms of large-scale complex social and political problems. For example, making education systems more supportive of people who have particular kinds of propensities for learning or development. So if you have a big public policy problem like obesity, do you throw money at everybody or do you know that bringing physical education into classrooms when kids are in second grade is really good for 70 percent of students but it’s not going to affect 30 percent of the student, who actually really need medical targeting for intervention around dietary constraints?

And it’s not just domestically. If you want to take on the challenge of terrorism and you want to stop the recruitment of terrorists to cells abroad, this may help us figure out that there are different motivations for different kinds of terrorists. And maybe what is needed is to give some kind of maternal aid to mothers so that they are not malnourished when they’re pregnant, for example. And that’s a very different solution than war. But knowing how those risk factors develop can provide a lot of potentially useful information about the most effective points of intervention and the kinds of intervention to achieve the outcomes you want. I think what all of us ultimately want is to reduce human suffering, but the way to do that is not the same for every person.