AUSTIN, Texas — A team of astronomers led by researchers from The University of Texas at Austin has confirmed the emission of gravitational waves from the second-strongest known source in our galaxy by studying the shrinking orbital period of a unique pair of burnt-out stars. Their observations tested Albert Einstein’s theory of general relativity in a new regime. The results will be published soon in The Astrophysical Journal Letters.

Last year, the same team discovered that the two white dwarf stars are so close together that they make a complete orbit in less than 13 minutes, and they should be gradually slipping closer. The system, called SDSS J065133.338+284423.37 (J0651 for short), contains two white dwarf stars, which are the remnant cores of stars like our sun. 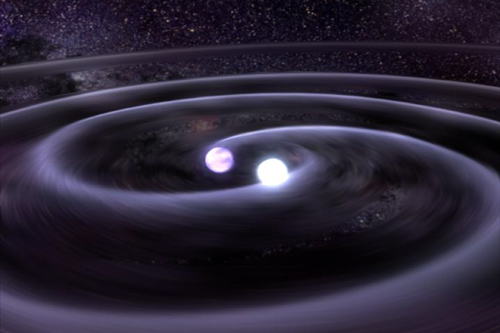 Einstein’s theory of general relativity predicts that moving objects create subtle ripples in the fabric of space-time, called gravitational waves. Though not yet directly observed, gravitational waves should carry away energy, causing the stars to inch closer together and orbit each other faster and faster.

“Every six minutes the stars in J0651 eclipse each other as seen from Earth, which makes for an unparalleled and accurate clock some 3,000 light-years away,” said study lead author J.J. Hermes, a graduate student working with Professor Don Winget at The University of Texas at Austin.

Einstein’s theory predicts that the orbital period of this binary system loses about 0.25 milliseconds every year, less than one-thousandth of a second. 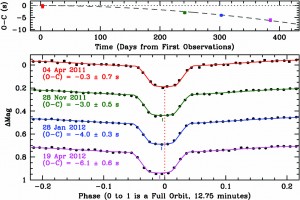 Data showing the decreasing orbital period of J0651. The dotted lines shows when the eclipse times should occur if the orbit were constant. The top panel shows how the eclipses have changed from when expected; the dashed line fits the observations. The bottom panel shows a zoomed view of the primary eclipses for four different months of observations (the colors correspond to the points in the top panel). Over time, the mid-point of the eclipses happen sooner (they shift to the left), indicating that the orbital period of the binary system is shrinking. The rate at which this orbit is shrinking is so far consistent with predictions from the emission of gravitational waves. Image credit: JJ Hermes/McDonald Obs./UT-Austin

The team has just tested that prediction using more than 200 hours of observations from the 2.1-meter Otto Struve Telescope at the university’s McDonald Observatory in West Texas, the 8.2-meter Gemini North Telescope in Hawaii, the 10.4-meter Gran Telescopio Canarias in the Canary Islands of Spain, and the 3.5-meter Apache Point telescope in New Mexico.

“Compared to April 2011, when we discovered this object, the eclipses now happen six seconds sooner than expected,” said team member Mukremin Kilic of The University of Oklahoma.

This confirms that the two stars are getting closer and that the orbital period is shrinking at nearly 0.25 ms each year. By April 2013, the eclipses should happen roughly 20 seconds sooner than they did relative to the group’s first observations in April 2011.

“These compact stars are orbiting each other so closely that we have been able to observe the usually negligible influence of gravitational waves using a relatively simple camera on a 75-year-old telescope in just 13 months,” added Hermes. The Struve Telescope, which came into service in the late 1930s, was the first at McDonald Observatory.

Astronomers know of just four other binary systems with orbits under 15 minutes, and all of those systems are transferring mass from one star to the other, which complicates observations of orbital decay and the interpretation of these changes in terms of gravitational waves.

“This result marks one of the cleanest and strongest detection of the effect of gravitational waves,” said team member Warren Brown of the Smithsonian Astrophysical Observatory. 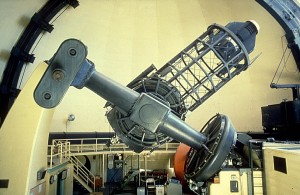 The direct detection of gravitational waves is notoriously hard. Gravitational waves from J0651 are predicted to change two points in space an inch apart by less than a billionth of a trillionth of an inch. To detect such a tiny effect requires satellites that shoot lasers at each other from millions of miles apart. No such mission is currently funded by NASA or the European Space Agency.

“Here we have an easier way to detect the effects of gravitational waves, though indirectly,” added team member Carlos Allende Prieto of the Instituto de Astrofísica de Canarias.

J0651 will provide an opportunity to compare future direct, space-based detection of gravitational waves with those inferred from the orbital decay, providing important benchmark tests of our understanding of the workings of gravity.

The team expects that the period will shrink each year, with eclipses happening more than 20 seconds sooner than expected by May 2013. The stars will eventually merge. Future observations will continue to measure the orbital decay of this system, and attempt to understand how tides affect the mergers of such stars.

“It’s exciting to confirm predictions Einstein made nearly a century ago by watching two stars bobbing in the wake caused by their sheer mass,” Hermes said. The two stars in this system are both less massive than our sun; one has half the sun’s mass and the other other a quarter. 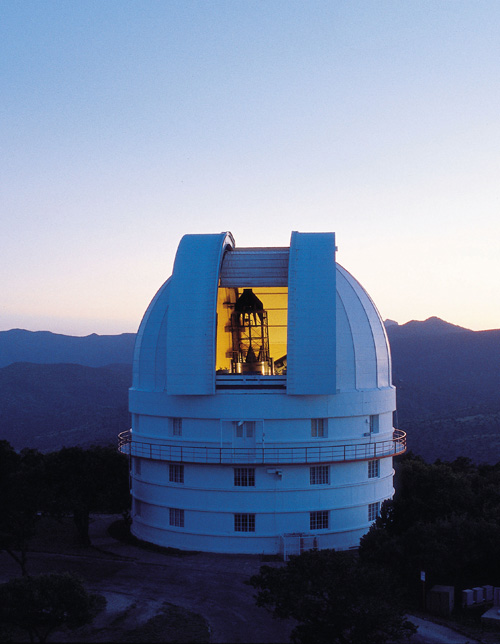