Phillip Penix-Tadsen, assistant professor of foreign languages and literatures at the University of Delaware, is reaching his students at new levels inside and outside the classroom. The spring 2012 semester was the first time Penix-Tadsen required the use of Facebook Groups by all his students to increase engagement and participation.

“That virtual space builds a kind of community for the class that leads into the in-class interactions. Students get to know one another in the Facebook Group, which leads to stronger class conversations and discussions,” Penix-Tadsen said.

Facebook Groups provide instant access and notifications to students who are already members of this social site. “We are connecting with students where they already are,” he said.

Facebook allows groups to share documents, or Facebook Docs, which Penix-Tadsen has his students use for editing and sharing critiques of texts. The ability to leave a comment on a Doc enables students to provide one another with feedback. Penix-Tadsen also prompts students on the group’s wall with discussion questions to get the students involved in a conversation about the material, before reviewing it in class the next session.

About the video: Phillip Penix-Tadsen, assistant professor of foreign languages and literatures, discusses use of technology in the classroom. Video by Sarah E. Meadows

Penix-Tadsen reported that as bonds formed among the students, some students arranged study sessions and meet-ups through the Facebook Group to go over class material and review for exams. 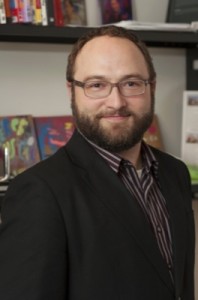 “You don’t have to be friends with your students on Facebook to create or use a Facebook Group,” Penix-Tadsen emphasized. “There is no peeking into your private life; you don’t have to share personal information. They are not going to see your status updates or pictures of your kids.”

Ashley Mortimer, a 2011 graduate of the College of Arts and Sciences, created her Google Site about President Obama and included links to Obama’s official site, Facebook, Twitter, Flickr and blog. Google Sites allows customization and multiple content formats such as video, photographs, info-graphics, links and text that puts students in the role of creator and curator of the technology that they use daily.

“Google Sites has worked very well for me; it is an interface that is very easy for students to use and incorporates a multimedia experience,” Penix-Tadsen said. “Students are living in a multimedia world, and it is beneficial to tap into that.”