Prebiotics are fiber supplements that serve as food for the trillions of tiny bacteria living in the gut. When taken, they can stimulate the growth of the “good” bacteria. The evolution of prebiotic supplements (as well as probiotics, which are actual bacteria ingested into the system) provide new therapeutic targets for researchers and physicians. 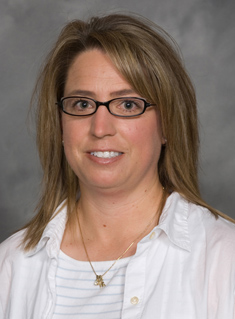 In research published in the Journal of Nutrition, MSU’s Jenifer Fenton reports that mice given the prebiotic galacto-oligosaccharide, or GOS, saw the severity of their colitis (one of the main forms of inflammatory bowel disease) significantly reduced.

In fact, the mice fed GOS – a synthetic compound that is known to stimulate beneficial bacteria and is found in foods such as biscuits and infant formula – saw a 50 percent reduction in colitis.

Research has shown certain types of foods and fibers can reduce colon cancer risk, said Fenton of the Department of Food Science and Human Nutrition.

“There is something unique about certain types of fibers, such as GOS, and how they alter cells and influence the immune system to change disease risk, either for the good or bad,” she said. “Our overall goal is to identify either dietary patterns or diet components to reduce inflammation and cancer risk.

“In this case, we used prebiotics to stimulate changes in bacteria in the gut that may have a beneficial impact on the colon.”

Fenton worked closely on the project with Elizabeth Gardner, also with the Department of Food Science and Human Nutrition and who previously has looked at the impact diet plays in fighting off the flu. In applying some of the lessons learned in those studies to mice with bacterially induced colitis, the researchers found mice given GOS had significantly less inflammation and fewer abnormal cells, two precursors for colon cancer.

It appeared, Fenton said, the positive results were linked to the significant enhancement of the body’s own natural killer cells, found in the immune system and crucial in fighting off new infections in the body.

“Our results suggest GOS may be effective in reducing colitis severity by priming the innate immune system,” she said.

The next step is to verify how that mechanism works; finding that link could help researchers apply the lessons learned to other intestinal ailments.