Several decades ago, precipitation in Delaware was among the most acidic in the country. Pollutants in the air reacted with rainwater to sprinkle sulfuric, nitric and carbonic acids onto the ground below, affecting crops and ecosystems statewide.

The scientific consensus is that pollution controls enacted through the Clean Air Act Amendments in the 1990s and other measures have helped decrease the acidity of rain by approximately 60 percent to less harmful levels, as reflected in data gathered nationwide and by UD researchers in Lewes, Del., as part of a longstanding study.

“Every time it’s rained since 1978, we’ve collected and analyzed samples,” said Joseph Scudlark, assistant director of the School of Marine Science and Policy in the College of Earth, Ocean, and Environment. “It’s one of the largest, longest continual records in the whole country, and the data shows pretty dramatically that the legislation is working.”

Scudlark oversees an acid rain collection site in an isolated part of Cape Henlopen State Park. A specialized container sits out in the open with a small canopy to prevent debris from entering, and precipitation triggers a sensor powered by a nearby solar panel to open the lid and capture samples. Once the rain stops, the device automatically returns the cover. 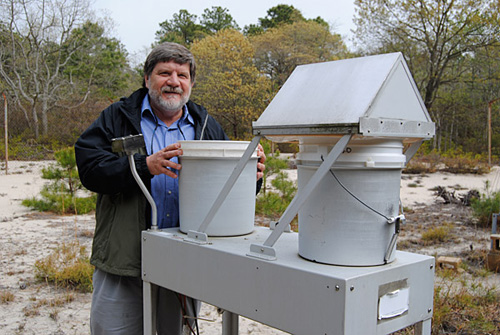 Joseph Scudlark has gauged the acidity of rain at UD’s collection station in Lewes for more than three decades. Photo by Teresa Messmore

Each day at 9 a.m. Scudlark’s assistant collects the sample, which is prepared in a lab and shipped off with others obtained the same week to a central analysis station in Illinois through the National Atmospheric Deposition Program. The pH and concentration of certain substances are measured along with samples from 250 other locations around the country.

While the collection methods have been largely the same over the past three decades, the research associated with the project has shifted focus over time. In the early years, monitors concentrated on gauging the distribution and severity of acid rain nationwide. UD’s location at the Hugh R. Sharp Campus in Lewes was significant: Researchers wanted to know whether the atmosphere near the ocean counteracted the acid-producing qualities of pollutants, and found that it did not.

“This was in the very early days of acid rain and not a lot was known about it,” Scudlark said.

In the 1980s, he worked with Thomas Church, E.I. du Pont Professor of Marine Studies, to analyze the presence of trace metal pollutants like lead, mercury, zinc and copper in rainwater and gauge their impact on coastal waters. Later they and others started examining how nitrogen, including nitrogen from ammonia generated from the poultry industry, was entering the air and then Delaware’s coastal waters to cause algal blooms and other problems.

By the mid-1990s, acid rain research focused on how well the Clean Air Act Amendments were working. Data gathered in Lewes and around the country shows dramatic improvements over the long term, taking into account natural variability in the climate from year to year. With the pH scale ranging from 0 at its most acidic, 7 for pure water and 14 at most basic, precipitation acidity in Lewes improved from 4.3 to 4.7. 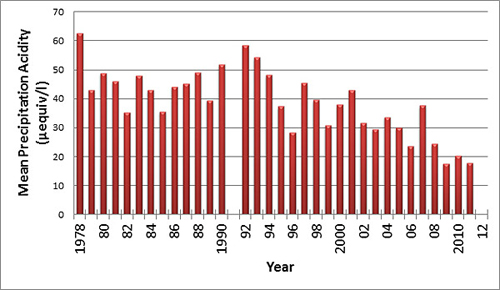 Long-term trends in precipitation acidity observed at Lewes, Del. The decrease over the past two decades has been attributed to emission reductions brought about by the 1990 Clean Air Act Amendments. Graph by Joseph Scudlark

“It doesn’t sound like a lot because pH is a logarithmic scale, but it represents a 60 percent decrease, which is significant,” Scudlark said. “That is better than the original target of the legislation.”

Yet while the changes have decreased the amount of acid entering these ecosystems, fish populations and vegetation have been slow to respond. The soils have been leeched of certain important nutrients, in some cases organisms have completely disappeared. Certain fish, for example, have yet to return to previous numbers. That’s why researchers continue to watch and monitor.

“It takes time for the soils, lake sediments and organisms to rebound,” Scudlark said. “It’s not reasonable to expect that they’re just going to bounce back overnight.”